"There are aspects of my personality I can't control..." 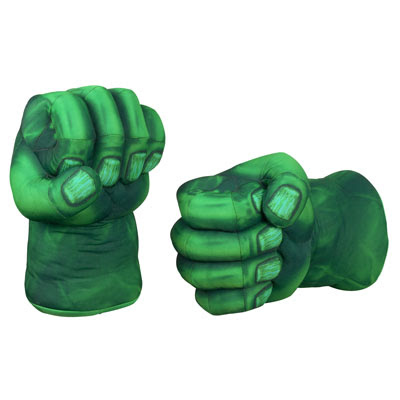 Watching children's TV with the small person yesterday, I caught an advert for some hokey old merch being launched in conjunction with the release of the new Incredible Hulk movie, starring Edward Norton. (Trailer looks particularly good. But I do have an unconscionable weakness for the silly big-budget actioner.)

"Ooh, yes please!" said the small person, turning towards me with starry eyes after watching the ad for the Incredible Hulk gamma-ray glow-in-the-dark mask and matching Hulk hands ("Unleash your inner hero with a power-packed punch when you slip on these Hulk-inspired mitts! Electronic sounds let you hear the smashing as you imitate the popular Hulk character with his giant green fists! Let the smashing fun begin!")

"Hmmm, yes, well, perhaps we'll ask Father Christmas if he can bring you a set," I said vaguely, using a time-honoured parental stalling tactic. The small guy, who is no fool, promptly fixed me with a stern look and said "No I mean I'd REALLY like those hands. I'd REALLY like to get them. Let's write it down."

I'm always a bit stuck at those moments, thinking on the one hand well, that's just cheap commercial rubbish churned out from minimum-wage economies, awful violent pre-packaged disposable nonsense which would take the next millennium to biodegrade in the landfill -- and on the other, thinking oh, actually that looks like quite a lot of fun... Clearly I have somewhat of a Jekyll and Hyde thing going on myself. 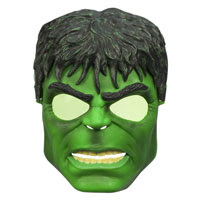 My immediate observation was the visual similarity between the Hulk gear (particularly when worn) and various artworks by both Ronnie van Hout and Francis Upritchard, vis: 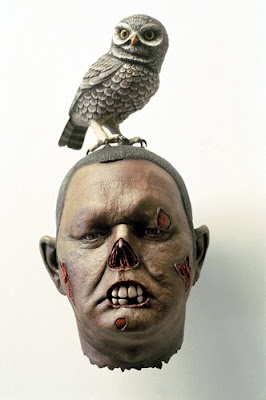 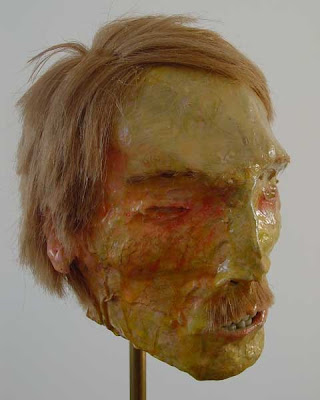 Clearly there is an entire sub-genre of monster head art that's developed over the past few years, of which the Hulk gear can be considered a commercial offshoot. Or perhaps it's that the art and the popular culture are both mining the same vein of contemporary nostalgia for fictional horror. The monster lurking under the everyday face...

The Incredible Hulk, of course, belongs to that golden age of American network TV which also included The Dukes of Hazzard and Knight Rider. Friday nights on Channel 2 were a big deal in our house in 1980. Talking was reserved for the ad breaks only, in case you missed anything: we sat down to watch, armed with a large bag of ready-salted chips and a dip made by mixing condensed milk with a packet of onion soup. The double-dipping rule was strictly enforced. Afterwards there would be the obligatory Boss Hogg and Jethro P. Coltrane impersonations, and Bill Bixby's muscle-flexing transformation into the Hulk would be reenacted. ("Don't make me angry! You wouldn't like me when I'm angry.... Grrrrr!") 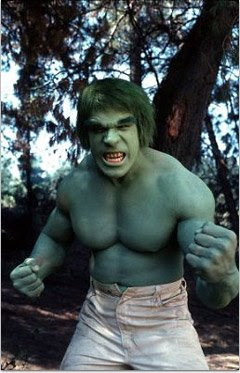 Body-builder Lou Ferrigno as the Hulk.

We were often struck by the fact that while mild-mannered David Banner's buttons popped off one by one and his shirt ripped right off his back as he transformed into the Hulk, his trousers remained firmly in place, simply shrinking up his legs into a ragged pair of clam-diggers. This, we opined, seemed somewhat unrealistic.

Hollywood has been revisiting the genre lately, picking up a new youth audience as well as tragic middle-aged nostalgists such as myself. Many of the stories really belong to an older generation again, though, who read the original Marvel comics on which many of the characters are based. I'm interested to discover that there was also a She-Hulk, who appeared in the comics from the late 1970s: a criminal defence lawyer by day, she received a transfusion of radio-active blood from her cousin, David Banner/The Hulk, and suffers the same monstrous transformation when she gets riled. (Looks like her trousers rip right off, though.) 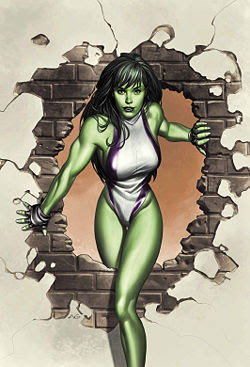 A long wet winter trapped inside with the small people has given me a new appreciation of the monster lurking under the everyday face. (Mine, that is, rather than theirs.) I wonder if they do those Hulk hands in a grown-up size? Grrrrrr...

Posted by Cheryl Bernstein at 9:46 AM