Lately my life has been locked in a dialectical struggle between, on the one hand, the extremely brainy books I'm attempting to digest for my university work, and on the other, the minor domestic incidents which pepper my existence like pellet holes on a West Coast road sign.

Recently these have included (but are not limited to) the following:

1. The hair clippers blowing up in the middle of two simultaneous haircuts, leaving the big guy with a No. 1 and a bushy beard, like one of those blokes out of ZZ Top; while the small guy was left high and dry sporting a long front, short back, and a two inch fringe across the nape of his neck. Throw in a couple of Team Holden jackets and it would have been a splendid father and son look for a night out at the stock cars;

2. Running over a fresh dog poo with the deep 'mountain' tread tyres of the baby buggy, something the Super Nanny and Gina Ford's otherwise comprehensive parenting manuals completely fail to mention;

"Useful new verb, 'to moast' - that is to moan about one's condition while at the same time also secretly boasting about it."

and being rightly told off for so doing (even though it accurately describes the conversational style of several people I know).

4. Dealing severely with the return of a large pantry rat with a taste for chocolate buttons;


So all in all, there's been little visiting of art exhibitions lately, and not a great deal of TV watching either now we're through the second series of The Wire and awaiting the arrival of the third from Wellington. As ever, though, the small guy can be counted upon. He is just about to finish his first year at school ("Mum, I really hope Santa brings me an archery set for Christmas! Binoculars for spying on people! And a huge nerf gun!") and recently completed a new book which deals with evolution and comparative mythologies -- traversing much the same territory as Denis Dutton's The Art Instinct, though I believe the small guy's approach to the material is less dogmatic. Including the Loch Ness Monster, leprechauns, and God, the small guy is clearly a cultural relativist: put them in a room together and I think he and Dutton would have words. 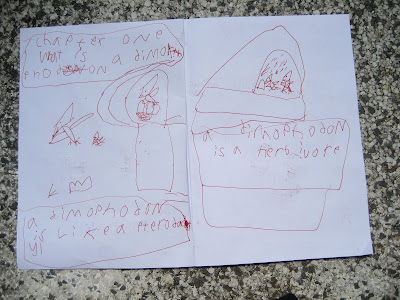 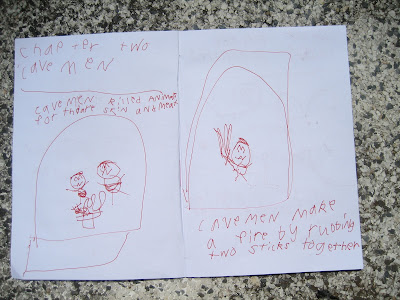 Chapter Two: Cavemen
Cavemen killed animals for their skins and meat. Cavemen make a fire by rubbing two sticks together. 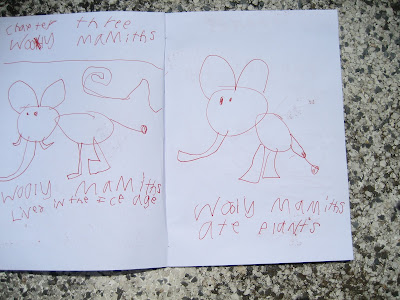 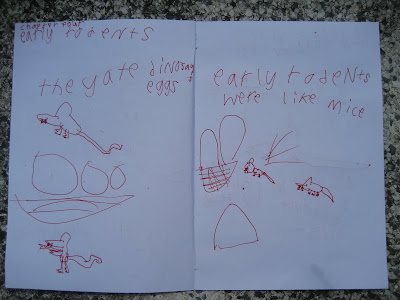 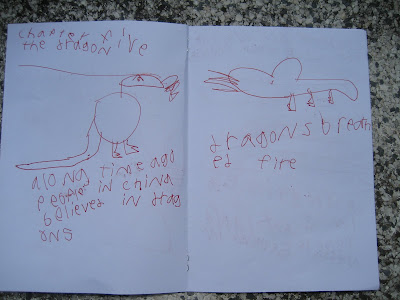 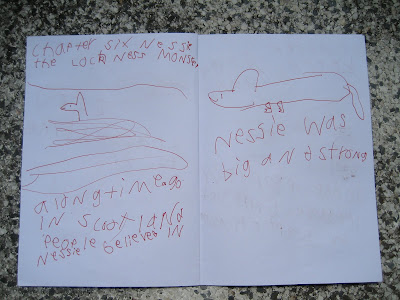 Chapter Six: The Loch Ness Monster
A long time ago in Scotland people believed in Nessie. Nessie was big and strong. 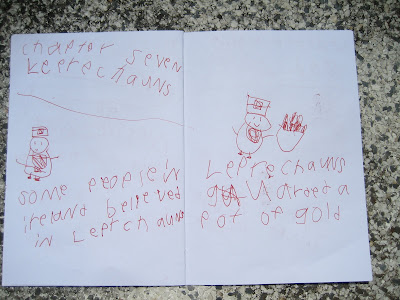 Chapter Seven: Leprechauns
Some people in Ireland believed in leprechauns. Leprechauns guarded a pot of gold. 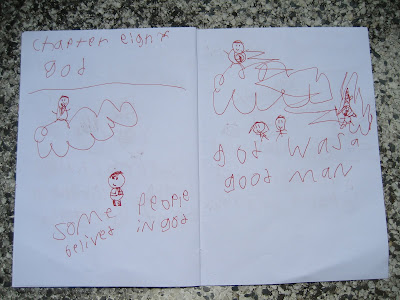 Chapter Eight: God
Some people believed in God. God was a good man. [The picture shows God on his cloud sending a bolt of lightning to Earth to kill a witch who is threatening two children.] 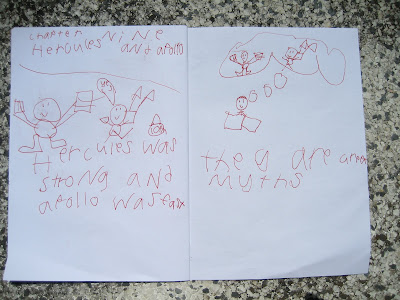 Chapter Nine: Hercules and Apollo
Hercules was strong and Apollo was fast. They are Greek myths.

The book's title? The Discovering Fun Saloon. The cover has a picture of a cowboy holding a gun in one hand and a bunch of balloons in the other. Its original title was simply the very bold History, but the small guy crossed that out and retitled it when he moved on from the facts and got on to the 'beliefs' section. That's the sort of thing that makes him such enormously good company.
Posted by Cheryl Bernstein at 7:11 AM

and being rightly told off for so doing

That would be because expressing any sort of appreciation for Alain de Botton is, wait for it...

But moast is such a good word and so applicable to much of my tweeting :-)

I don't make the rules.

I miss you when you go quiet. I tell you some of the other blogs in our area! sheesh

I think the kid has talent! Small guy may someday write The Key to All Mythologies - one that works beeter than the one attempted by that creep in Middlemarch.

Enjoyed this immensely. Will try harder not to be dogmatic.