Some of the most memorable art experiences I've had have been off the clock and off the wall, outside art galleries. Taking a special trip to see a work of art in a distinctive setting somehow compresses and distills your experience of the work. Maybe the effort required to see it makes you pay single-minded attention to what's in front of you, unlike the way that works in art galleries have to compete for your time and gaze.

These moments for me have included climbing the steep hill to see the Henry Moore in the Wellington Botanic Gardens; making the trek to the Matisse Chapel in Vence; coming across Michael Parekowhai's metal trees at Britomart and being completely astounded by the scale and conception of the work; my childhood memories of my brother and I poking our heads through the Barbara Hepworth bronze on the Exeter University campus; driving past Bill Culbert's Sky Blues and Blue for the first time at night (the latter work should be on everyone's must-see list for Christchurch -- it's quite simply one of the best public works in the country).

In Auckland recently, we took a trip to the Cathedral of the Holy Trinity in Parnell, something I've wanted to do for several years. The Cathedral is increasingly staking a claim for itself as one of the more significant commissioners of contemporary art in this country. It has an extraordinary cast glass font by Ann Robinson which has just been dedicated (I'll post images of that shortly), and major window works by Robert Ellis, John Baker, and Shane Cotton.

The 'Pacific neo-Gothic' building by architects John Sinclair and Dick Toy is terrific -- a kind of friendly brutalism that acknowledges the forms of the old wooden church nearby while creating an elevating and soaringly grand space -- and the integration of the works with the architecture is exemplary. But we were really there to see Shane Cotton's suite of windows, which I've photographed below, commissioned in 2002 and completed a year or so later. If a cathedral building can be called a public place -- and I suspect the very friendly and welcoming people at Holy Trinity would see their building in that light -- there is strong argument for Cotton's windows to be considered one of New Zealand's most ambitious and successful public works of art. Memorable, resonant, achingly beautiful, effortlessly synthesising different cultures and histories and worldviews, they really are one of the best things I've ever seen. My photographs do little justice to the experience of being in that cavernous space with Cotton's works. Everyone should go and visit them immediately. 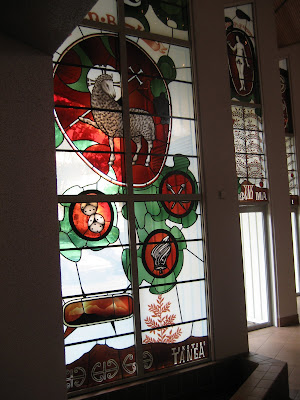 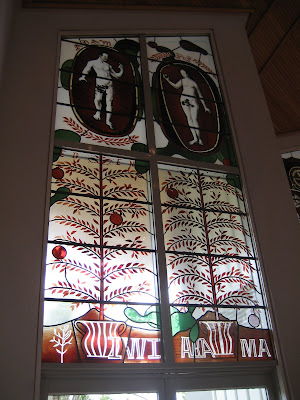 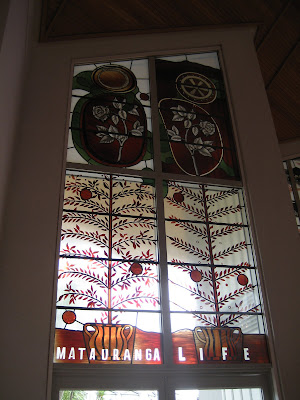 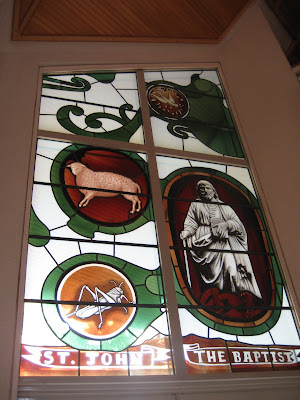 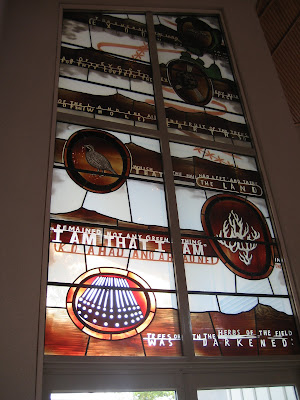 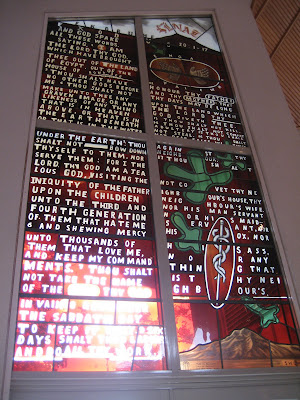 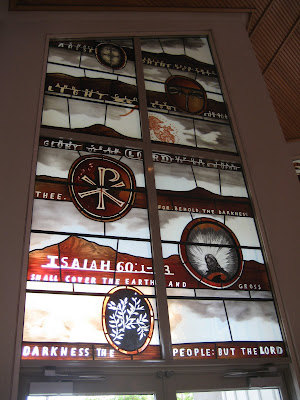 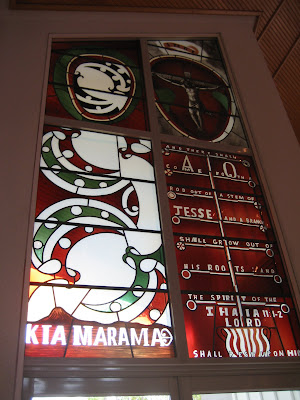 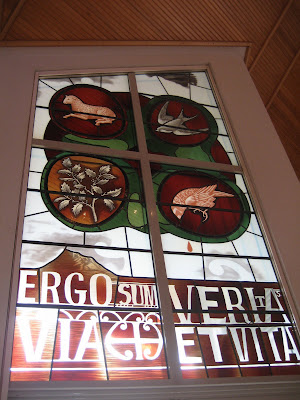 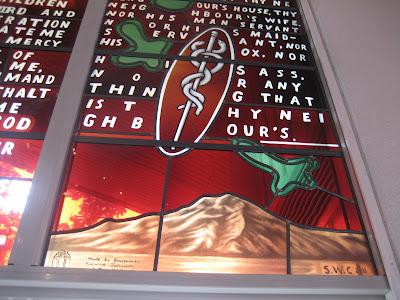 The windows were fabricated by Suzanne Johnson and Ben Hanly of The Glassworks. To see more of their work, go here.
Posted by Cheryl Bernstein at 10:58 AM

Great to see these posted Cheryl, it seems that many people don't even know they exist. Ben Hanly and Suzanne Johnson of The Glassworks, worked with the artists to create these wonderful stained glass works. Their remarkable work is also worthy of more recognition.

You're quite right to mention the contributing role of Ben Hanly and Suzanne Johnson, Chris, thank you: I will add a link. The workmanship in the glass itself is incredible, and I can only imagine the technical difficulties presented by the design, particularly the window with all the lettering.

So great to see you post on these windows.
I think they are one of Aucklands greatest treasures.
Was first shown them by Hamish Keith. It was a memorable afternoon.

Pleased you found these on your trip. I used to go and admire them in my lunch hour. I keep meaning to blog about the ridiculous treatment by some in the media of Cotton's Blackout Triptych, which was recently resold for big bucks. The NZ Herald called the work a 'gang painting', and got Michael Laws to comment on it!