Lately our house has been gripped by collection-mania. The small guy has been furiously eating his way through groaning bowls of cereal, even to the point of regularly asking for Ricies and ice-cream, a dish of his own invention, for dessert. The object of his desire is Weetbix rugby cards, for which he has conceived a rare and burning passion. His conversational starters these days include such gems as "Would you like me to take you through all my cards in the order in which I got them?" and "Mum, I know you said I wasn't to talk about them again today, but I've been thinking, if I swapped Sitiveni Sivivatu..." and the plaintive "I really wish I hadn't swapped Richie McCaw with Edward... Do you think I could get him back?"*

When the big guy was sick the other week it fell to me to take the small one to soccer, which is the nearest I've got to a sportsfield since a regrettable foot-tripping incident on the netball court at high school. I am not generally considered a sporting type, nor I am one of nature's sports'-lovers, though I am married to one. The big guy has an uncanny ability to discover a test match just about to kick off, while seemingly innocently channel hopping: "Oh, look," he says, "Might just watch a few minutes." I open a book, although it's hard to concentrate over the yelling and drumming of feet. (I will admit to a slight relaxing of my usual anti-sports 'tude when Frank Bunce appeared on Dancing with the Stars.) 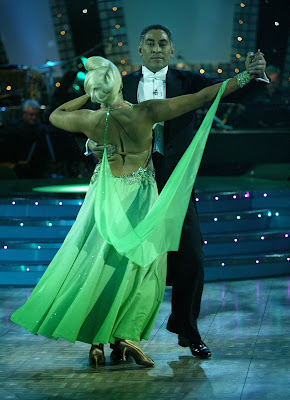 
While the small guy had a terrific time running round after the ball in a mad puffing scrum of muddy little boys, and the other parents roared up and down the sideline barking instructions to their oblivious offspring ("Tackle him! TACKLE HIM! Oh, what's that! They're playing A STRATEGIC GAME! Get off, you showpony! etc), I stood under my brolly listening to art podcasts, giving the small guy an encouraging shout now and then when he hove into view and feeling, not for the first time, like a bit of a tosser. While the big guy is able to balance his enthusiasms for art and sport most effectively, I suspect I may have been born without the requisite gene. The artworld is a comfortable enough habitat, but on the sideline of the soccer field on a wet Saturday lunchtime I am a fish out of water.

The small guy's mania for rugby cards, however, is something I'm quite familar with. It's a look that I've seen in the eye of many art collectors over the years. The collecting bug is one that all public galleries depend on; the expansion of the New Zealand art market in recent years means that galleries are increasingly dependent on loans from private collectors to supplement monographic exhibitions. Many 'museum quality' works, as they used to be called, are now in private hands, and it's the job of public galleries to persuade the collectors to part with their works, temporarily, for public exhibitions.

Art collectors are usually interesting people to speak with, as -- like the small guy, who needs no encouragement whatsoever -- they'll often communicate wild and intemperate enthusiasm for the works they've acquired. They might have started with an anonymous painting bought from the school art auction, and end by waiting in the rain outside a top dealer gallery for an advance preview of an exhibition opening that night: the kind of exhibition which opens with the red dots already appended to the works. Arranging, distributing, and refreshing their collection, as well as acquiring new works, can take up a considerable portion of a serious art collector's time and energy. 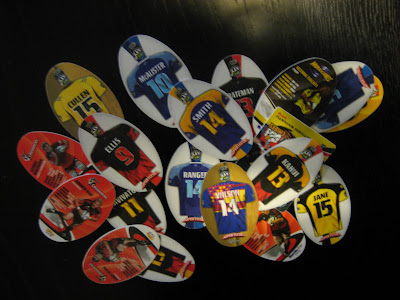 The small guy, who is no fool, realised early in the piece that a competitive advantage was inherent in the fact that his little friends were keenest on Crusaders cards. He understood that if he were to collect another team, one less valued by his rabidly red-and-black mates, any Crusader cards he got would be more valuable as swaps. This proved correct: on several occasions, before rugby card trading was banned at school, he was able to negotiate two-for-one deals. He started to put together a collection based around the Highlanders ("Because they're a bit useless, and no one wants them") and the Chiefs, for ancestral reasons. Sentimentality got in the way, a bit: for ages he wouldn't part with George Whitelock ("He's hopeless, hasn't got any points, and I feel sorry for him.") Although not intrinsically different, or even rarer, some cards had a higher value purely because they were more sought after by those in the know. It was just like the art market.

The small guy got serious. He press-ganged his extended family into changing their breakfast-eating habits; found a couple of lost cards on the pavement; ate dozens and dozens of Weetbix; spent hours rearranging the cards and thinking of different taxonomies (positions, teams, cereal types, favourite-to-least-favourite, and so on); and was continually encouraged by his long-suffering mother to please introduce another topic of conversation. The collection steadily grew. 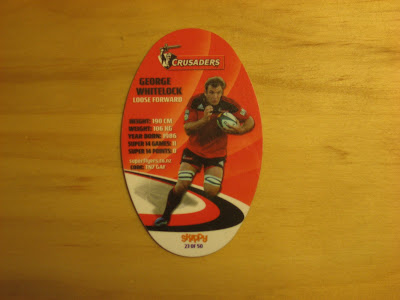 Poor old George Whitelock: we feel a bit sorry for him.

And then one day Charles came round for a playdate, with a bulging bag of swaps. Charles is a big maths brain; while the small guy, more language-orientated, is confident pronouncing tricky names like Mils Muliaina, Charles refers to all his cards by their number. Listening to their conversation was like watching a debate at the UN through the medium of simultaneous translation. A brisk session of horse trading ensued after afternoon tea. "Do you need Corey Flynn, Charles? Because I might be prepared to trade him for someone good." "Flynn, Flynn. Number 21. Yes. OK. What are you thinking?"

But something was amiss. It slowly dawned on the small guy that the enormous pile in front of Charles only represented his trading cards: his real collection was at home. It was essentially very dispriting. The cards are due to stop being issued in early June; it would be impossible for the small guy ever to catch up. (In vain we told him that Charles's parents teach at a boys' boarding school, where they must go through three hundred packets of Weetbix a week: no wonder he can hardly lift his bag of cards. It would be like comparing the collection of a public gallery to the works pinned up on one's fridge. No consolation, though, for the serious collector.)

The small guy put his collection away for a few days until an envelope arrived from his uncle with a few more cards (new ones! no double ups!), and his enthusiasm was rekindled. But it's been an interesting thing, watching the collecting bug develop in the small guy, and his knowledge of rugby consequently grow exponentially, in the way that an art collector's does, when they start getting serious about their subject. (As well as his intuitive feel for the 'market' in the cards. Terrible. Capitalism 101, for six-year-olds.) What's been most interesting for me, with no wish to further my own very limited knowledge of sporting heroes, is to discover that the kinds of behaviour that I'd previously put down to the specific enthusiasms of art collectors are in fact those of collectors in general. Whether it's the holy grail of a McCahon or of Richie McCaw's face on a Weetbix rugby card, it's the thrill of the chase that's the point.

Posted by Cheryl Bernstein at 1:29 PM

I love this post. My own daughter plays soccer on Saturday mornings and I am there weakly yelling "go!" when it appears appropriate because the other parents are yelling too. Luckily she only showed an interest in the rugby cards when she realised their 'social' trading value at school. Maybe she'll be an art dealer rather than a collector?

The analogy is perfect.