"This art is a terrible business."*

It's been a dry spell in the blogging life: while twittering like a maniac, and scribbling away offline, I've been on the blogging wagon for the past month. Last night, however, the clouds burst and the rains came, and here we are again this morning. Kia ora and hello.

With season two of Mad Men now a distant memory, there is now officially nothing to watch on New Zealand TV if you're not keen on:
a. sexy vampires;
b. forensic pathology;
c. other people's home renovation disasters;
d. Hamish McKay (not the art dealer, the other one) being subjected to yet another personal indignity on Pulp Sport.

There is, however, always Coronation Street, a guilty pleasure for a couple of decades now. I represent the third generation of women in my family to be obsessed with it. The baby hasn't shown any interest yet, but give her time, give her time.

Yesterday evening in a disgraceful example of life imitating art the big guy and I were eating dinner in front of the TV. We had just settled down in front of Coro with a plate of kedgeree (a dinner choice prompted by various nostalgic and plaintive tweets about one of the things I miss most about living in Wellington, along with the Northland Panels and Moore Wilsons: Kelda's kedgeree at Nikau), when I happened to mention to the big guy that I was sick of looking at the horrible 'art' in Gail Platt's house -- a framed poster of a flower-bedecked doorway in the Algarve by an anonymous watercolourist, which has hung in the Platts' lounge behind various scenes of mayhem over the past decade including attempted murders, divorces, teenage pregnancies, juvenile deliquencies and the greatest horror of all, Gail simply being herself -- and I expressed a fervent wish that the set dressers would change it. 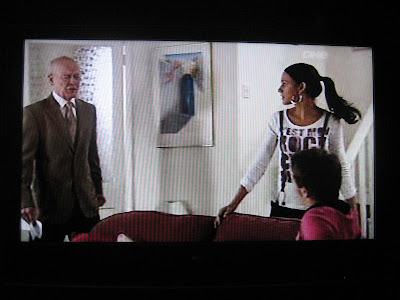 No sooner had I said this than a major new storyline began to unfold, involving, for perhaps the first time in recorded history, art on Coronation Street. (Thus neatly combining two of my greatest interest areas and strongest specialty subjects, and prompting this post.) Here's the set up. Having recently swapped houses, a source of teeth-gnashing female interpersonal tension and consequent escapades of one-upmanship that lasted several months, Claire Peacock finds a painting rolled up in the attic of what until very recently was for many years the appalling Kevin and Surly Webster's dreary residence. 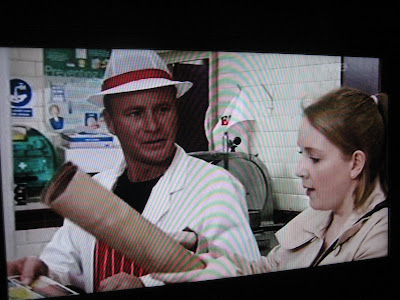 In a frenzy of excitement she takes it to her drippy husband, the butcher Ashley, and unrolls the canvas. 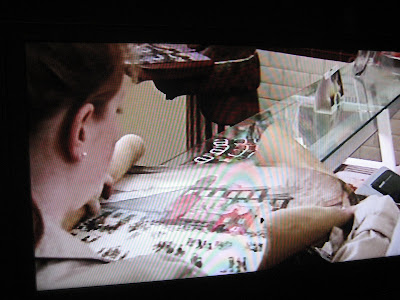 'Ha ha!' he says. 'Did the kids do that?' Thus confirming his suitability for his chosen vocation of chopping up bits of offal rather than a career as an art critic, interesting plot device though it could be. 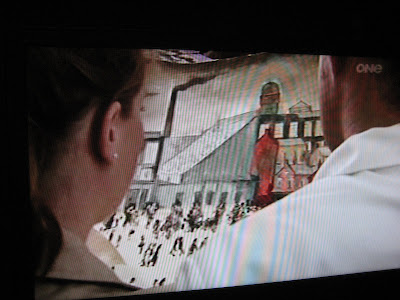 But hang on, those matchstalk men look familiar... 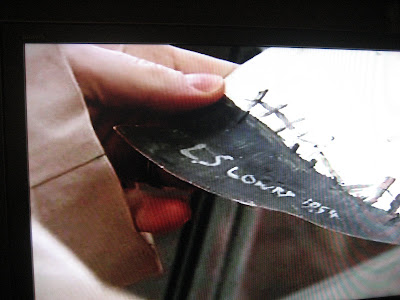 Could it be ... could it be ... a real Lowry? One of these? A previously undiscovered work of art by that other great cultural chronicler of fictional working class life oop there in the bleak North? But that would be worth a fortune! And involve endless dramas over its authenticity, provenance, and ownership that would keep a troop of actors in work for months sorting it all out, wouldn't it? Eeeee, but that were a champion idea for a story, Deidre.

Can't wait for next Tuesday.

I've just finished reading the monograph on Lowry by TJ Clark that accompanies the current Tate show ... if it hasn't yet come to your attention I am sure you will find it a worthwhile read, whatever you think of his view of life :)