Because I am a tosser 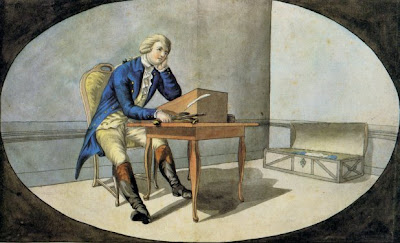 When graphic designers mock up a page for a client, they drop in dummy text as a placeholder to show how the published version will look. The old stand-by placeholder text is the very dull Lorem Ipsum, a Latin passage from Cicero which has been used by designers and compositors since moveable type was invented in the 15th century. ("There is no one who loves pain itself, who seeks after it and wants to have it, simply because it is pain . . .").

The other day via graphic designer Tina Roth Eisenberg (Swiss-Miss), I came across a site which offers designers considerably more choice than Lorem Ipsum. If you're partial to a bit of anguished Germanic surrealism, you can drop some 'Kafka' into your dummy publication ('One morning, when Gregor Samsa woke from troubled dreams, he found himself transformed in his bed into a horrible vermin'): or if, like me, you're an unspeakable tosser, you can go straight for the full 'Werther' ('I should be incapable of drawing a single stroke at the present moment; and yet I feel that I never was a greater artist than now.')

I really, really like the idea of this Dummy Text Generator as a tool for designers (and if they had a 'Proust', a 'Carver' or a 'McCarthy' I'd be in heaven), although in a way the concept is more likely to appeal to the client -- who is presumably usually the one with the literary pretensions -- than the designer. ('Graphic designers never read the text they're working on,' said a friend once to me, and he should have known, as he was a very experienced one.) On the other hand, having Goethe or Kafka keeping the page warm for one's own immortal words could be somewhat off-putting for the nervous literary client: it sets the bar pretty high, and could well cause writer's block and a log-jam in the production process, something not encouraged by graphic designers.

My feeling is that both 'Kafka' and 'Werther' should probably be used with caution, being primarily suitable as dummy type either for rhino-hided winners of major literary prizes or the anonymous authors of the Innovations catalogue (I'm imagining the positioning of a paragraph beginning 'For a long time I used to go to bed early' beside a photograph of the device you can pee in while driving long distances); for anything in between, sticking to the tried-and-true Lorem Ipsum might well be safer.
Posted by Cheryl Bernstein at 12:44 PM

Once I was designing a new version of my website in HTML. Instead of using some existing text or the Latin, I quickly wrote some stuff, purely to have text that looked liked something I'd write.

I sent the page to a friend, asking for a critique of the design. He wrote back saying he didn't like the new direction, and that it seemed really unfocused and not up to my usual standard.

I realised he was critiquing the dummy text, not the design.