There was news of an interesting cultural discovery the other day in Canterbury: the old coat of arms of the University of Canterbury, designed by the artist Bill Sutton and made in lino by Sutton and his students from the School of Fine Arts in the 1950s, has been painstakingly restored by conservator Emily Fryer after being found in a shed. 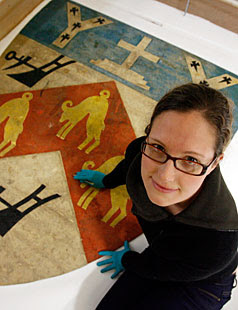 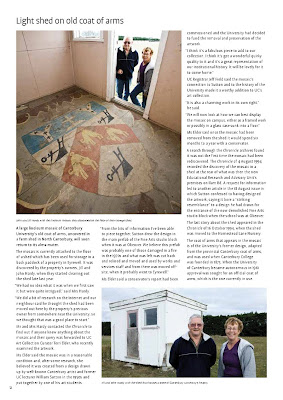 Here's a photograph of the original building, after the catastrophic fire which gutted it in 1975: 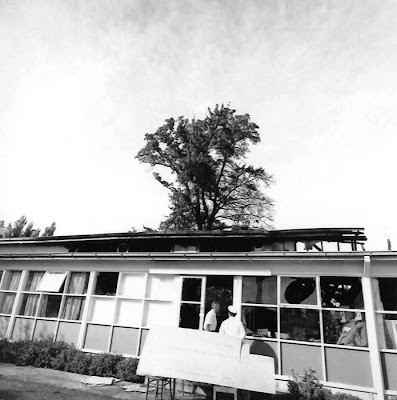 And an image of one of the lecturers' offices (more photographs at Digital NZ): 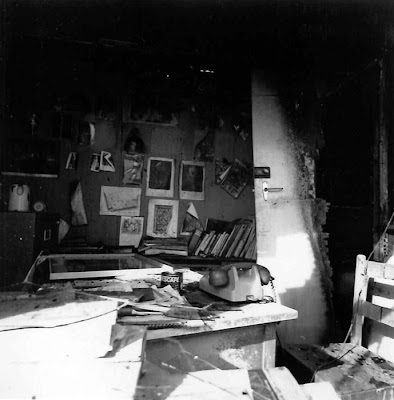 In its restored state, the coat of arms includes a burn mark, presumably dating from the art school fire. It seems to have originally been designed by Sutton for the floor of the art school's entrance, and was superseded in the early 1960s when the University became autonomous and changed its crest. Thereafter it's been lost and found a few times over the years in various sheds around the university campus, but following its restoration is going to be formally accessioned into the University's art collection, and is likely to be set into the floor in one of the new buildings at the Ilam campus. It's good to see the university treating its own art history with such care and seriousness, and I'm looking forward to seeing the coat of arms when it's exhibited later this year.

It reminded me a great deal of the similar crest set into the floor of my old high school, featured in Peter Jackson's Heavenly Creatures. As I remember it, the shot showed the girls' lisle-stockinged legs and clumpy brown shoes flowing like water around the crest: they were forbidden to tread on it, as were we, forty years later. (So of course everyone did walk over it, whenever they could get away with it.) I don't know who designed and made Girls High's one, which is still set into the floor in the old building, now used as a community facility: the ribbon is nice, but it certainly doesn't have the attenuated elegance of Sutton's design for the university. Wisdom and truth girls, wisdom and truth. And get your dirty great feet off the crest. 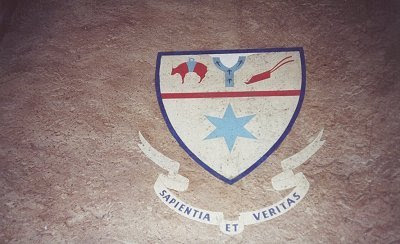 Image from Heavenly Christchurch.
Posted by Cheryl Bernstein at 2:56 PM

Email ThisBlogThis!Share to TwitterShare to FacebookShare to Pinterest
Labels: Bill Sutton, Only in Christchurch, public art

While I don't have much time for crests as such, I like it that Sutton's work is preserved in humble, much maligned lino at floor level.

And yes, I parted for the other crest too...