Andy Warhol had soup for lunch every day for 20 years. His favourite home-cooked dinner was turkey and potatoes, "because it looked so simple and clean". Picasso liked ancient eggs, stilton and preserved ginger. Edward Hopper was partial to "cans of the friendly bean". Jeff Koons served his favourite food, tuna burgers, at his 50th birthday party. And while Louise Bourgeois had a lifelong fondness for the humble oxtail, at one point in the 1990s Tracey Emin was on 70-100 oysters a week.

What these artists' snack preferences have in common (with the possible exception of Louise Bourgeois's, as oxtail takes a bit of stewing; but then again she was extremely well-organised) is a lack of fuss and no need for lengthy preparation. As Jo Hopper, Edward's wife, told the compiler of a Greenwich Village cookbook who'd approached them for a recipe: "We feel that where there's too much fussy cooking there isn't so much painting."

In a similar vein, here are two tasty no-fuss snacks enjoyed by Lyttelton's favourite son, the artist Bill Hammond, and Jane McBride. I do like to think of Buller's Table Cloth being painted with the help of a fortifying beetroot buttie. 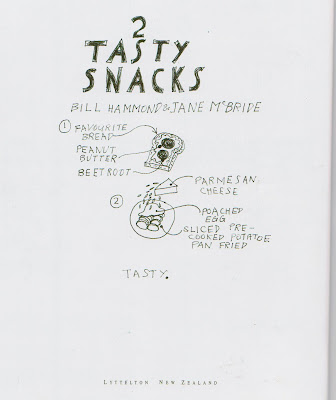 From Harbour Kitchens: Celebrating Lyttelton, Its Food and Its People, Lyttelton Main and Lyttelton West Schools, 2009. Introduction by Roy Montgomery.

Posted by Cheryl Bernstein at 6:48 AM