The Rules of Sculpture; or, Dancing on the Table 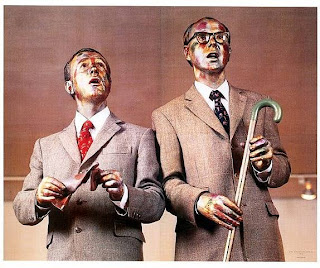 In New York in 1991 -- which is quite a long time ago now I think about it -- I visited the Sonnabend Gallery in SoHo. I had no idea what was on. When we got there, the walls were covered in a series of very large, slightly expressionist pencil drawings on paper. The paper was rippled, in places, and a bit crinkly, like a newspaper that's been left in a potting shed for a year or two. The drawings looked familar, but I couldn't immediately place them. We shuffled from foot to foot, and looked around, but there were no clues. An extremely personable gallerist came out and put us out of our misery: "Gilbert and George," he said. "The same exhibition that they showed here in 1971. Singing Sculpture. They remade it for us. They were here last week. Look, here's the table they stood on," and he gestured towards it.

We turned as one and gazed at an empty wooden office table.

We'd missed Gilbert & George by a week, but it might have well have been twenty years. We imagined them standing there on the table, dressed in their suits, their faces painted bronze, twirling their canes and slapping their gloves, miming to 'Underneath the Arches' played over and over and over again.

When they performed the Singing Sculpture in 1970, they 'sang' for up to eight hours a day, standing side by side on the table, keeping going no matter whether anyone was in the gallery or not.* 'Underneath the a-a-a-a-arches', over and over again, accompanied by classic vaudevillian gestures, like the mindless repetition of the work on an assembly line in a factory. (My grandmother, who grew up in the East End, had a similar propensity to break into 'Underneath the Arches', an old music-hall standard by Flanagan and Allen, at the drop of a hat. I think once or twice through was the most she'd do in one go, though.) Written in 1932, the theme of the song is poverty and homelessness, as voiced by two tramps: 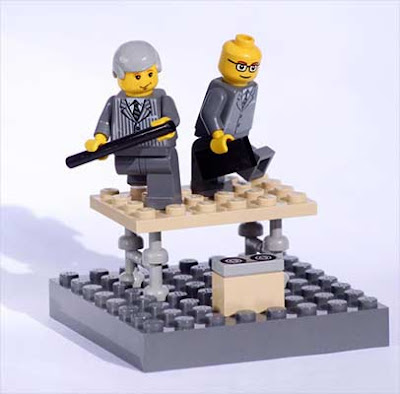 "In our little studio in Wilkes Street in Spitalfields, we played that old record 'Underneath the Arches'. We did some moving to it, and we thought it would be a very good sculpture to present. That, in a way, was the first real G&G piece. Because it wasn't a collaboration. We were on the table as a sculpture, a two-man sculpture."

Gilbert and George were in Sydney earlier in the year to celebrate 40 Years of Kaldor Art Projects at the Art Gallery of New South Wales: John Kaldor had originally brought them out to Australia in 1973 to perform the Singing Sculpture. Although the odd work has occasionally been shown in New Zealand as part of a touring international collection, I don't think that Gilbert and George have ever exhibited a body of work in this country, something I wish a public gallery would rectify quickly. (What I'd really like, of course, is to see them dancing on the table in their suits.) The place has been on their minds, though, albeit as a metaphor for the furthest reaches of civilisation: “We think that we should be able to make a sculpture that can address every man, woman or child, whether in Africa, New Zealand or anywhere,” they said in the late 1990s.

There's a lot to like about Gilbert & George: having worked hard since the debut of the Singing Sculpture to close the gap between art and their own lives, they are eminently, hilariously quotable, living works of art in dapper suits whose last names (Proesch and Passmore) have almost been lost to art history. They've lived in Spitalfields since 1968, documenting what they see on the streets while taking their thrice-daily walks to their nearby studio. Racism, sexuality, class consciousness, bodily fluids, booze, squalor, dumb jokes: "There's nothing that happens in the world," they've said, "that doesn't happen in the East End," which is pretty much what I understand from my own family's long history there. Amazingly, a series of images inspired by the graffiti they saw each day in 1974 was deemed too objectionable to be shown until 2002. "We look at the raw material of life," said George. "We prefer to come out of the front door, it's been raining, there's a puddle there, there's a bit of vomit from a Chinese takeaway, there's a pigeon eating it, there's a cigarette end, and that's all there is. And then you know what it is."

Of their various manifestos and maxims for life, perhaps my most favourite is Gilbert and George's 'Laws of Sculptors', which should be standard operating procedure in every art school. (And may well have further useful application beyond the visual art world.)

2. Make the world to believe in you and to pay heavily for this privilege.

4. The lord chisels still, so don't leave your bench for long.

Good advice, that. Better get back and do some chiselling of my own.

* Because I am a suspicious type, I've wondered how anyone can really be certain that G&G really kept on performing when the gallery was empty, but then I suppose there was someone else there, an anonymous assistant dropping the needle on the record over and over again; a Herculean labour almost commensurate with the performance itself, except the person could probably sit down most of the time, and pop out now and again for a cup of tea.
Posted by Cheryl Bernstein at 10:29 AM

"The greatest threat to art is posed by Occupational Health and Safety regulations." (Jasper)

I guess it's in the same league as Tom Friedman's '1000 hours of staring' artwork - a blank piece of paper that he looked at for the said amount of time. How far does that trust of the tile and or the viewer go?

Maybe it's to do with the suspension of disbelief that every work of fiction requires: the unspoken contract between the artist and the viewer that the world conjured up by the work of art will be deemed to be real, for the duration of the work (120 minutes in a cinema, or a few days for a novel, or 15 minutes in a gallery looking at a painting). We choose, or not, to believe Gilbert & George, or Friedman, or any artist at all: to pick up the challenge of a new way of looking laid down by the artist through the work.

(Contracts with Occupational Health and Safety, however, are quite another matter, and have no provision for the suspension of disbelief, unless wearing an approved harness.)