Yesterday I took part in the inaugural Episto Tweet Conference on Twitter, organised by @HORansome (the admirable Matthew Dentith, academic philosopher of conspiracy theories and "one of New Zealand's top debunkers".) 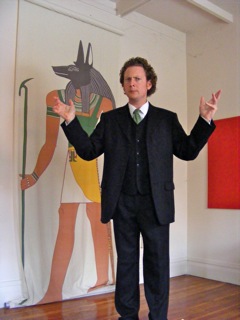 The rules were very strict. A paper in six tweets, one of which was to be the title, each of which must be numbered consecutively and contain the hashtag #twecon. The papers were delivered as delegates made themselves available throughout the day. There were some questions from the floor, but as @kittenypentland noted, thankfully no conference weirdies. (Regrettably, there were also no conference drinks.)

Here's a copy of my paper, which could very well be subtitled "Imma Tosser". 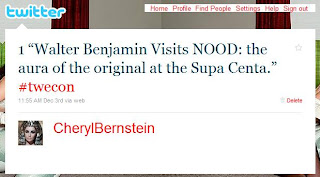 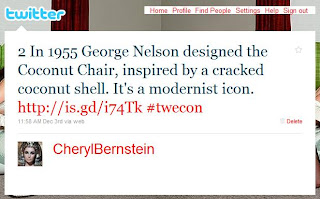 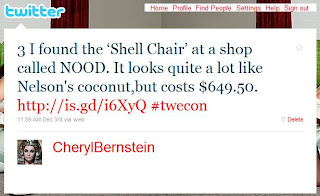 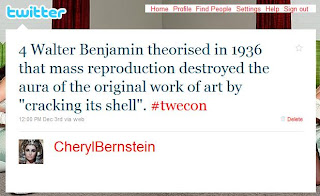 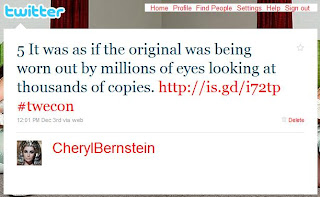 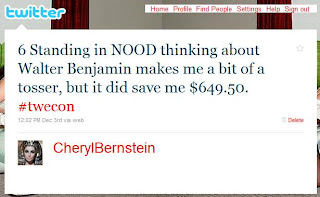 Many of the papers were very good. I particularly enjoyed @SarahLibrarina's exposition of hand-painted signs on Dunedin student flats (research for her forthcoming book), and @KittenyPentland's consideration of ethics on Twitter. (Matthew Dentith has full transcripts of all papers available on his blog.) The event itself was a great success, and will be repeated. It also indicated the possibilities inherent in new modes of academic communication, which Mike Dickison discusses briefly here.)

In  short: despite unspeakable tossery from me, #twecon was a good thing. Looking forward to the next one.
Posted by Cheryl Bernstein at 1:37 PM

It's a great idea. I might do the next one. I'd imagine it's not that different to having to squish the gist of your paper onto powerpoint slides.