In search of some dried green peas for dhal and Tibetan Pea Cakes over the weekend, we drove to Bin Inn (where I was struck, not for the first time, between the strange new synchronicity between (a) poverty and (b) the greenie leftie middle-class taste for sustainability involving slow cookers and ethnic cuisine. In a Venn diagram, the intersection between the two is undoubtedly Bin Inn). Perhaps unwisely, I said that the small guy could choose what he liked from the lolly bins.

This, of course, is what he chose. 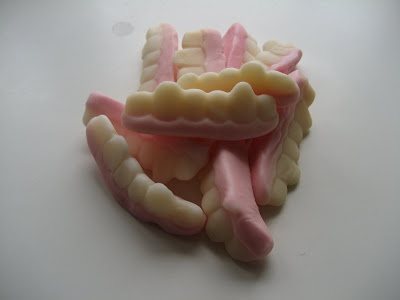 As a consequence there has been much menacing of other family members by means of the comedy teeth. Which instantly took me back to my English childhood, and my grandad's tricks with his false teeth; performed, to the occasional and great delight of my brother and I, out of sight of my mother and grandmother, who had banned that particular school holiday comedy turn, along with the singing of dubious songs from World War II: 'Himmler ... was very similar' etc. Of course, the disapproval only intensified the enjoyment. Later, orange peel teeth, chip fangs, and Austin Powers-esque veneers made from masticated Minties entered the forbidden repertoire of childhood tooth modification. I think it's probably genetic and innate: there is a certain kind of person who views the world and its objects as raw material happily placed before them for their own amusement, and another kind who does not. (The former type often, in my experience, becomes an artist.) 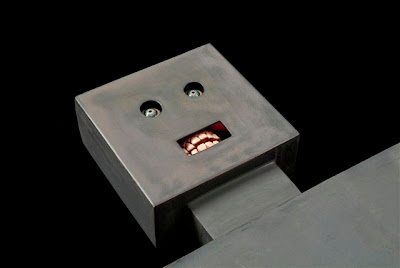 We were driving past the Christchurch Art Gallery the other day when the small guy caught sight of the advertising for the forthcoming Ronnie van Hout show, which features his Failed Robot (2007) [pictured above]. Like his parents, the small guy is a massive fan of Ronnie van Hout's work. We took him to see a show at Hamish McKay's when he was two: the look of amazed delight on his face when he saw Ronnie's giant wonky fibreglass Donald Duck and Mickey Mouse figures was something I'll always remember, probably because it entirely matched my own feeling. Encountering Ersatz (Sick Child) at the Christchurch Art Gallery, his reaction was similar. As we drove past the big back-lit image of Failed Robot, I watched the small guy's face in the rear vision mirror: his immediate and total capture of attention by the image, the amazement spreading across his face, the slow smile of recognition becoming an exultant laugh ('Ha!'), then an urgent query:

'Mum, is there really an actual person inside that robot?'

'I'm not sure,' I said. 'Do you think there might be?' (It's hard to turn off the art educator thing, even when one has been decommissioned.)

'Yes,' he said. 'It's definitely a real person's teeth.'
Posted by Cheryl Bernstein at 1:17 PM