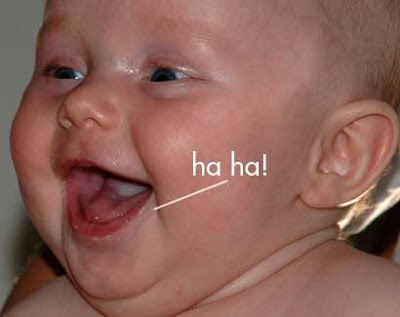 A baby. Not related to me.

One of the things I miss about being in the workplace – possibly the only thing I really miss – is the laughs. I used to spend a lot of time at work laughing. (If you didn’t, you’d dissolve into tears. Or go batshit postal. Over the years I have experienced both entirely understandable reactions among the ranks of my colleagues. The euphemism I used to use is that public art galleries present an unusually robust work environment, quite to the surprise of most people who think it's all posh girls with expensive clothes wafting about admiring pictures and pretending to be intellectual. Chance would be a fine thing, I used to think, as I'd roll up my sleeves, spit on my knuckles and venture into the fray, swinging wildly.)

Working in public art galleries, you come into contact with a wide range of eccentric personalities with inordinately large and combative egos – many of them working inside the institution; the artists by comparison are easy to deal with – which creates surreal situations of unparalleled absurdity. On a daily basis, there seemed to be a lot to laugh at. Where I last worked, as a rookie you’d start with open-mouthed incredulity at the sheer ridiculousness you’d encounter; you’d work your way up to unstoppable guffaws out in the gallery where you’d have to escape to, by way of quiet collegial sniggers in the tearoom; until finally, as a dear friend of mine once did in the face of unspeakable provocation, you might laugh so hard in a meeting that you’d go scarlet in the face and choke, tears shooting out of your eyes as you’d race out of the door. (The 'coughing fit' that you’d afterwards apologise for fooled no one, of course.) I can remember coming home at the end of the day feeling like I’d done 500 sit ups, my stomach muscles would be so sore from holding the mirth in. My poker face was a source of considerable personal pride.

(Can't say what it was all about of course. I'm sworn to secrecy. You sign something or other to that effect when you start.)

At home with a baby, things aren’t so funny. Occasionally amusing things might happen, but there’s no one to share them with. Hearing yourself laugh out loud when (effectively) alone feels like the thin end of the wedge, too: next you’ll be keeping 56 feral cats and creating a fire hazard in the hall with old newspapers. Saving up the funnies till the end of the day when the significant other returns to the nest usually falls a bit flat. 'You had to be there,' I'd find myself saying weakly, when attempting to recount some amusing moment with an exploding nappy or somesuch.

The same is true of swearing. For at-home mothers, the opportunities for swearing are severely curtailed, which again is something the baby books and antenatal classes never think to mention. And if I say so myself, I am a champion swearer. I'm proud of it: I come from countless generations of champion swearers. In my book, swearing is both funny and clever. It represents not only an opportunity to let off necessary steam -- to avoid the emotional problems that Freud suggested would inevitably be caused by repression of the traumatic, cough cough -- but provides a significant opportunity to express one's creative inner self. Working in public galleries afforded a vehicle for my talent for the construction of creative volleys of foul language to be exercised on an almost daily basis. And yes, I do miss it. Who wouldn't?

Again, I expect this would surprise many people who might assume that public art galleries are polite and refined places. I have been in many different workplace environments over the years, but I suspect the only industry to rival public art galleries for use of various descriptive Anglo Saxon phrases would be the night shift at the printers. Foul language is not, as you might think, part of the gallery technicians' job descriptions: the art gallery director and management team are frequently the worst offenders. A new marketing manager at a gallery where I once worked gradually grew more and more tight-lipped over the course of his first week. Finally he could bear it no more. 'I'm not a prude!' he hissed, 'But Cheryl, I think it sets a very bad example for senior managers to swear in front of the junior staff.' I will admit that for a hopeful minute I thought he was exerting quite a sophisticated and entirely appropriate poker-faced public-gallery leg pull. I was disappointed.

The small guy, however, has recently turned five, and with the rush of testosterone that is meant to accompany the school birthday, has developed a sense of humour so entirely puerile, scatological and wildly inventive that I am -- although also his doting mother -- in complete awe at its daily magnificence. Home life has become like living in the prequel to Wayne's World.

For example, he had a little friend round for a playdate (as they're now called) the other day. After running round and round the dining table yelling for what seemed like half an hour, they sat down to watch Sponge Bob, each wearing a pirate eyepatch and poking each other in a friendly way from time to time with toy swords. Sample dialogue:

On and on and blinking on.

Despite his parents' best attempt to turn him away from the arts into a satisfying suit-wearing career involving numbers and large sums of money, the small guy has taken to writing stories at a furious rate lately: I've blogged previously about his excellent self-help book for dealing with unwanted attentions from yucky girls. (Hilariously, How to Get Away From Girls by Sam has gone minor-ly viral: I've had copious hits on it from all over the show, the page favourited via the Facebook pages of countless people I don't know. I'm just glad it's been useful.)

For your reading pleasure, here's the text of his latest, entitled The Adventures of Rabbit, Hamster and Guinea Pig: The Flying Underpants.

(I increasingly think the home life may have humorous possibilities I never imagined.)
Posted by Cheryl Bernstein at 8:20 PM

:-) to all of that minus the galleries. In my previous corporate life I was told more than once to tone down the swearing and laughing

A reasonable and accurate description, I think.