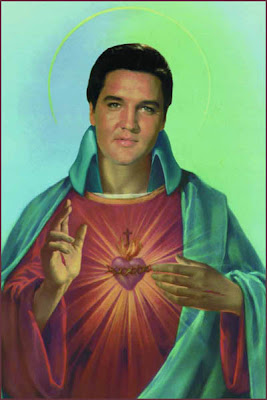 The big guy said something interesting the other day. (I should stress that this event in itself isn't the point of this post: he is often quite interesting, both on and off his specialty subjects.) We were talking about the extraordinary outpouring of emotion on Twitter and in the old media about the death of Michael Jackson. I was quite surprised about it, probably because I haven't thought anything he'd sung since Billie Jean is much chop. The big guy, however, pointed out that I'm swimming against the stream of 750 million album sales, which would mean that quite a lot of people do think Michael Jackson is reasonably good.

So then I thought about the celebrity deaths which have been meaningful in some way to me.

And of these, of course, the greatest and most significant was Elvis.

'Do you think Michael Jackson was the black Elvis?' I asked the big guy, and also put it out for consideration on Twitter: the answer from both sources was a resounding no. In a royal smackdown between the King of Rock 'n Roll and the King of Pop, 'Presley', as my father always referred to him, would take care of business on all fronts.

When I wondered aloud if the estimable Harry Hutton might be correct in his assessment that 'Michael Jackson touched the hearts of simpletons everywhere', ('No display of ass-hattery will be judged excessive in the coming days. If Blair himself read a prayer at Jackson's funeral then led the congregation in an embarrassing dance, I would hardly wince'), the big guy suggested that it was more likely to be an age thing. 'People affected by Michael Jackson's death are too young to remember Elvis's,' he said.

Comparisons, though odious, are also quite interesting as well as being good money-spinners for hack writers, and someone's bound to do a fine job pulling together all the links between Elvis and Michael Jackson: the entourages, the crazed shopping sprees, the prescription medicines, the odd relationship with food, the physical wreckage, Lisa-Marie.

Michael Jackson certainly had the comparison in mind. I came across this sad quote from his 1998 memoirs: 'The way Elvis destroyed himself interests me, because I don't ever want to walk those grounds myself.' Which is just inviting any number of sappy feature articles lambasting the cruelty of the global capitalist celebrity mincer machine and referring to butterflies broken on the wheel, candles in the wind, etc etc. (In the midst of all the emoting, however, I was pleased to hear that Bubbles the chimp is doing it easy 'listening to flute-and-guitar music' away from the media spotlight at a sanctuary in sunny Florida. Damn shame someone who cared about him couldn't have got Michael Jackson to one, as well.) 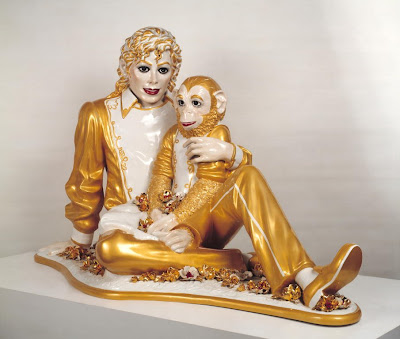 In 1988 Jeff Koons made a large-scale porcelain sculpture immortalising both Michael Jackson and Bubbles, who was then a very young chimp. Interviewed by Farah Nayeri, Koons commented on Bloomberg.com this morning: 'I wanted to show Michael as a contemporary Christ figure: I wanted to give the viewer a sense of a spiritual authority. The type of adulation, the type of support that’s given to pop artists -- this was the contemporary type of support that I thought that Christ would have received in his time.'

Now that I am considerably older than Jesus, the next big birthday milestone will be the Older than Elvis birthday. I can't imagine a similar marker point at 50, the final age of Michael Jackson, but you never know.
Posted by Cheryl Bernstein at 11:57 AM

Greil Marcus wrote Dead Elvis, http://bit.ly/VFZbd in 1991, in which he argued that Elvis was bigger dead than alive. "Scanning the American scene, he finds Elvis omnipresent, from the cult TV show Twin Peaks (he killed Laura Palmer) to the star's life, which to many embodied the American dream" from the Amazon review, http://bit.ly/3E5Trk
Unsurprisingly, Marcus had already written about Michael Jackson in Lipstick Traces, http://bit.ly/287oEQ published in 1990 in which he uses Michael Jackson and the spectacular success of his Thriller! album to trace the limits of what the Sex Pistols had been able to accomplish. Perhaps Marcus will give us another book about MJ now that he is dead…

Dead Elvis is one of the best books I've ever read. Over recent days, I've been thinking how Michael Jackson's life and death is increasingly taking on Elvis-like proportions: like Elvis, he's being made to contain multitudes, to stand for everything, to become a symbol of whatever's needed, much in the way Greil Marcus wrote of his hunt for Elvis in terms of Herman Melville's 'whiteness of the whale'.

'The shade of Elvis Presley is now an anarchy of possibilities, a strain of freedom less clear, but no less suggestive, than the man ever was,' wrote Greil Marcus: I suspect the death of Michael Jackson leaves a similar anarchy of cultural possibilities in its wake.

It would be great if Greil Marcus were to write a book about Michael Jackson, but I suspect he may have already written it, about Elvis: the similarities between the two are extraordinary. But then again, maybe both Elvis & Michael Jackson are the contemporary protagonists of a really old story: a hero emerges and, betrayed by those closest to him, falls from grace, his legend growing more powerful than ever in death. Bigger dead than alive? It's got to be the Jesus thing, hasn't it.