When the old guy down the road moved out, the wreckers were there within days. The rooms he'd lived in for 45 years were reduced to matchwood within a matter of hours. In the morning the house -- nothing fancy, a rendered 1930s bungalow -- was still standing: by afternoon knock-off it was a pile of splintered plasterboard and broken timber in the middle of the section. The demolition crew left their bulldozer parked snugly beside the heap, its arms raised in victory like Liberty leading the people over the barricades. The next day, along with a portaloo delivery, a couple of heavy duty trucks arrived and took away the rubbish. The house was gone. 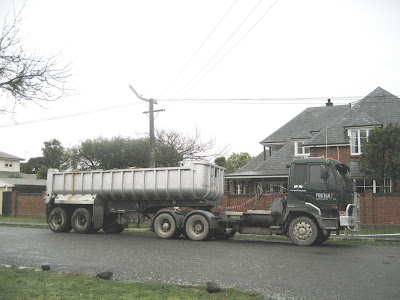 There was something indescribably sad about all this. The house was nothing much, and though I fear a neo-Tuscan mansion with triple garaging will rise in its place (the developer's threat to build 'stylish homes' emblazoned on the gate placard fills me with dread), I won't really miss it. I was watching as the power shovel smashed down the exterior wall facing the street and exposed the rooms inside. I'd never been inside the house, but as the machine raised its arms to deliver the deathblow suddenly I was looking at the faded wallpaper and swirling bathroom vinyls the old guy had lived with every day for all those years, his private rooms exposed to merciless public view. I felt terribly prurient for looking. It felt a bit like watching a car crash, at once compelling and abhorrent. The privacy of the house -- the thing that made it a home, rather than just a building -- had been torn apart. What for years had been hidden from public view had become a violent spectacle, then a pile of rubble, then empty ground.

Immediately afterwards it was as if the house -- and the man who had occupied it for nearly five decades, who'd seen several generations come and go and grow up around him on the street -- had never existed at all. The people who move into the new house won't know that a huge dark red camellia once grew in the front garden, nor that the path to the front door curved through the lawn like a serpent, nor that an old man with one leg used to wait near the gate on warm afternoons in his electric wheelchair and raise his hand in greeting to neighbours. It's the way of things, I guess: perhaps particularly in a new-ish country like New Zealand, and perhaps most particularly in Christchurch, which seems to be continually razing itself to the ground and starting again. The old gives way to the new, and history disappears in a heap of rubble on the back of a truck. I'm writing this down so I don't forget. 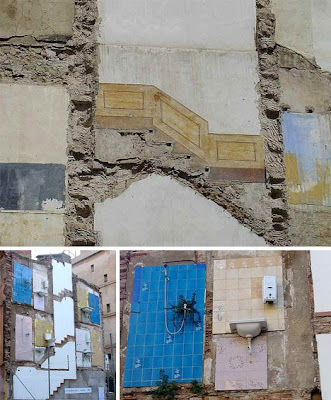 (In the sort of strange sychronicity of content and affect that the internet increasingly seems to deliver, I came across this blog post the other day devoted to the architectural ghosts of old rooms. It did the job for me. I couldn't bear to take a photo of the old guy's house coming down, though at top above I've pictured one of the trucks which took it away.)

We went to see the Ronnie van Hout show at the Christchurch Art Gallery in the weekend, and I was thinking a lot about rooms while I was there. So many of Ronnie's works seem to be concerned with the memory of specific rooms, and of the psychological effects of enclosed familar spaces. There's something very strange and haunting about his room-based works, a sense of an actual inner world made visible, of the past reconstructed in the present. His father's shed, which Ronnie reportedly saw inside for the first time only after his father's death, has been the subject of a couple of major works -- the twin sheds installed on the roof terrace at Te Papa, as well as a temporary installation on the forecourt outside the Christchurch Art Gallery a couple of years ago. 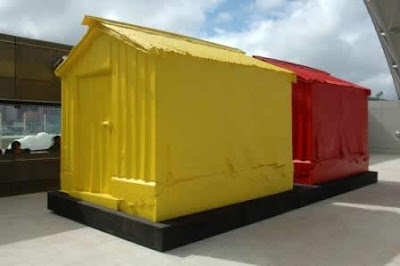 The current survey show -- quite brilliantly put together, alternately tense and hilarious -- includes the wooden models of his old school and family house, with a tiny video screen of the artist flickering in the windows. There's a fantastically eerie new work inspired by his trip to Antarctica, in which a life-sized dummy of the artist dressed in parka and snow goggles sits alone inside a kind of white viewing chamber, a thin rivulet of blood running from his nose. Peering through a window at him, I felt as if my breathing were instantly being measured and constricted. Even the tiny banana-man model seems trapped inside his airless perspex display case, holding a minute 'help me' placard.

Somewhere about the middle of the show, a wall appears to be entirely empty: it's only on close inspection that a small peephole becomes visible. Through the peephole is a secret room, with two genderless figures, slightly desiccated, on what looks like a doctor's couch, one naked. Un-signposted and easily capable of being missed by visitors, the secret room is entirely closed in by vast temporary walls which reach to the ceiling. It comes as a complete surprise, and somehow, within the architecture of the space, seems impossible. But it's there.

The changing spaces of art galleries always interest me. I like going into a familar gallery space and being bamboozled by a new installation, finding the gallery's architecture altered beyond recognition by the repositioning of temporary walls, so that my memory of other visits to earlier shows is entirely disrupted. The reconfiguration of architecture for the display of art seems entirely as it should be.

Equally, it's interesting to think about the accumulated histories of other artworks that have hung or been installed on the same walls before. Visiting City Gallery Wellington, I've looked at works displayed in the big downstairs gallery and thought about where the paintings by Van Gogh and Cezanne were hung when the Stedelijk show came to town; at Waikato Museum, I've wondered if the ghost of Simon Morris's big monochrome wall painting ever floats up though the dozens of layers of gallery white acrylic which now sandwich it to the wallboard; at Peter McLeavey's, I've looked at the hundreds of filled nail-holes on the scarred walls and wondered which were the ones that held McCahon's 'Scared' paintings in the mid-1970s; at the old Robert McDougall Art Gallery, where it was easier to install a temporary wall complete with faux wooden dado in front of Petrus van der Velden's Dutch Funeral than it was to take the massive work down, I've enjoyed secretly knowing that the big gloomy painting was still glowering away behind the wall a couple of feet away.

I've realised that some of my favourite works deal with the ghosts of old rooms: I suspect it's a hangover from having moved around so much as a small child.

Here's Rachel Whiteread's Ghost (1990), a concrete cast of an entire room displayed at the Tate.

And an evocation of a lost room by the Alexandrian poet Constantine Cavafy, who spent a lot of time alone in rooms remembering more congenial times in other rooms:

This room, how well I know it.
Now they’re renting it, and the one next to it,
as offices. The whole house has become
an office building for agents, merchants, companies.

This room, how familiar it is.

Here, near the door, was the couch,
a Turkish carpet in front of it.
Close by, the shelf with two yellow vases.
On the right—-no, opposite—-a wardrobe with a mirror.
In the middle the table where he wrote,
and the three big wicker chairs.
Beside the window was the bed
where we made love so many times.

They must still be around somewhere, those old things.

Beside the window was the bed;
the afternoon sun fell across half of it.

...One afternoon at four o’clock we separated
for a week only... And then—
that week became forever.

When I go to the City Gallery in Wellington I am still haunted by the books that used to be there and the huge catalogue drawers of the old card system.

Great post, thanks. I too recall the shifting nature of architecture and social culture in the everyday New Zealand environment, and recall the hours of painting photo realist images of late 1970's McDonald's interiors which now seem as if stage sets when contrasted against the gloss and chrome of the new.

Delightful! The ghosts of art past is something I think of a lot. What was there, what it was next too, painting out wall pieces that involved seven days of painting and sanding, filling holes from power cords, ingenius hanging methods to obscure where that tv monitor was installed, all ghostly presences. Now it is a design store!