When you work with artists and collections for a while, you inevitably get to thinking about them in a certain way. This artist belongs with that one, you think to yourself; these works are part of this school; these ideas are the particularly interesting ones; and you go about your business accordingly. It's not really a bad thing: not so much a prescribed way of thinking but more like an intuitive shorthand based on experience.

However, I really enjoy the kind of accidental curation that arises from looking at works of art in informal situations. Some of the best ideas come from just prowling about looking at works and constructing unlikely relationships between them. The painting racks in the art stores of public galleries, where the only principles of selection and juxtaposition are the relative sizes of works -- accommodating the largest number of works into the smallest safe space possible. These ordered but essentially haphazard spaces are a great source of random curation, in which a Woollaston might be hung cheek-by-jowl with a Rohan Weallans, or a Frances Hodgkins next to a Julian Dashper.

Recently I noticed a particularly pleasing example of random curation on our dining room mantelpiece, where we tend to put things that we want to look at for a week or so. On the left is a reproduction of Tony Fomison's Detail for a Dancing Skeleton (1970), from Art + Object's auction calendar for 2009. On the right is a postcard from rival auction house Webb's, featuring Don Binney's Kotare over Hikurangi (1965). Beyond very broad historical principles, I would never generally think to relate the two artists' work, and hadn't noticed the anthropomorphic face shape in the landform of Don Binney's painting until I put it next to the Fomison. 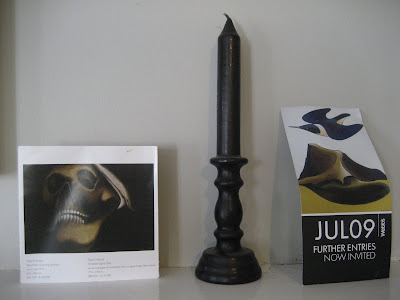 On the other side of the mantelpiece, Tony de Lautour's hand-screened catalogue cover from his recent show at the Physics Room accidentally on display next to the Dali invitation card has -- beyond the enjoyably silly formal relationship of the lightning bolt and the moustache -- has opened up a new avenue for me to think slightly differently about de Lautour's work in terms of pranksterish surrealism. 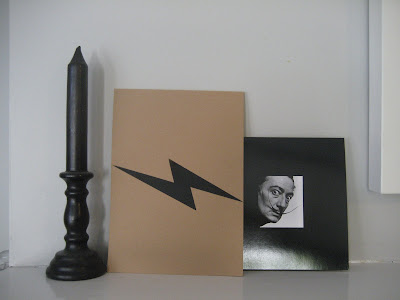 One of the best sources for random acts of curation are auction catalogues. Some of the strangest juxtapositions of works are thrown up on their pages; so wonderful, sometimes, that it's hard to know if they are genuinely random or are an inventive curatorial outlet for the auctioneer. (I must ask one!) I enjoyed this page of works incorporating disrupted grids from Art + Object's 'Second Important Paintings 2009' catalogue. Again, two artists whose works I wouldn't usually think to put together. (Allen Maddox's Grid (1982) and Lozenge (Blue) (1997) with Richard Killeen's Frontal Lobe (1998).) 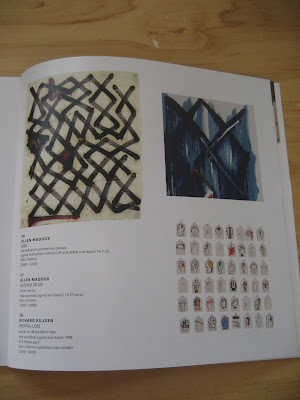 And, from the Webbs' catalogue, another couple of unlikely bedmates (though I would have been horribly tempted to put the Ted Bullmore on a page with the Ava Seymour photograph below. Thankfully, the auctioneers' good sense and taste prevailed.) (These are Edward Bullmore's Astroform no.13 (Bliss) (c.1967) and Callum Innes's Exposed Painting Red Violet Yellow Oxide Charcoal Black (2003), from Art + Object.) Makes me think, once again, what an incredibly interesting painter Bullmore was. 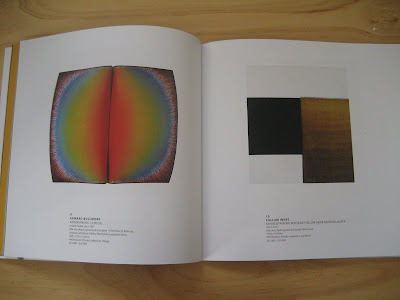 However, looking at the spread below, I find it impossible to believe that the auctioneer, or perhaps the catalogue designer, placed these two photographic works together randomly. (Ava Seymour's Yellow Oval Room (1994), and John B. Turner's La Patisserie (1972/8), at Webbs.) 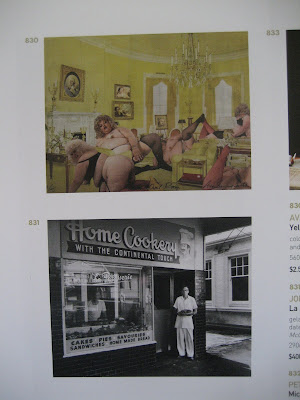 But I think perhaps the most enjoyable of all these random acts of curation I've seen lately is the page layout below from the Webbs' 'Important Works 2009' catalogue, juxtaposing Tony de Lautour's Display (2004) against Milan Mrkusich's Painting Indigo 1969. It's hard to know whether this odd comparison best positions de Lautour's work as colourfield abstraction with some doodley bits added, or Mrkusich's as a ground ready to receive the projection of personal content. Actually, it's probably both. And that's why I love these random acts of chance curation: they add immeasurably to one's perception of the almost boundless ability of good art to take on different resonances in different contexts. 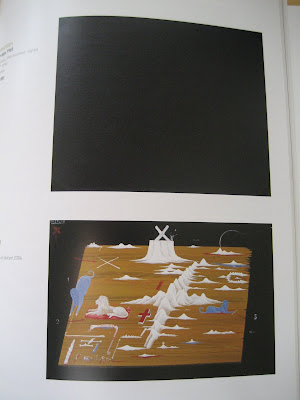 Posted by Cheryl Bernstein at 11:45 AM

I can say with a healthy dose of certainty that nothing is ever random, until you get down the back...