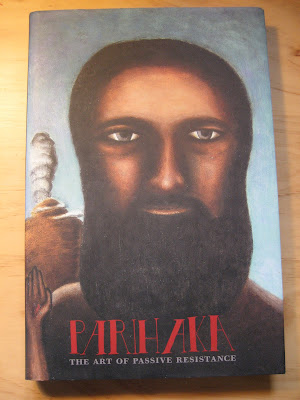 One of the most recognisable fonts designed in New Zealand in recent years is 'Parihaka', the typeface drawn by Neil Pardington (Kai Tahu), Aaron McKirdy and George Clarke for the exhibition and book Parihaka: The Art of Passive Resistance at City Gallery Wellington in 2001. The typeface was used for the title of the book, as well as for indvidual chapter headings. 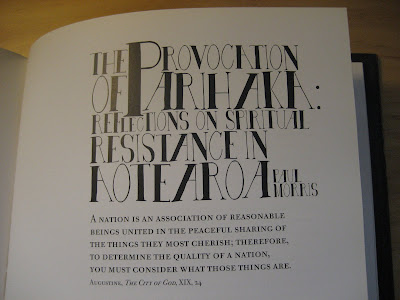 Gifted by the designers to the trustees of Parihaka Pa for their use following the exhibition, the font is now used as a logotype for the annual Parihaka Peace Festival in Taranaki.

The font's ancestry is complex. It's based on the lettering hand-painted on the walls of some nineteenth-century Maori meeting houses, which in itself was influenced by printed letterforms remembered from the early missionaries' Bibles. (The painted word has thus been a part of New Zealand art history from very early days.) While Maori communities lived with their treasures daily, it was not until 1993, with the publication of Roger Neich's seminal Painted Histories, that these early works of art were brought to wide public attention. Re-imagined and hand-drawn in a Wellington design studio in 2000, and finally digitised, the ongoing history of what's now known as the Parihaka font describes the way in which design is fundamentally a circular and cyclic process, the passing of a baton back and forth between artists of different generations and places.

I think it's one of the most important examples of New Zealand graphic design produced in recent years: utterly distinctive, at once elegant and engagingly awkward, informal yet painstaking, it speaks of the shared history of Aotearoa New Zealand while resisting categorisation as an antique aesthetic. Neither historical nor modern but something else again, the Parihaka font is essentially a hybrid, a coming together of diverse cultures and technologies.

I've thought a lot about this font over the years, and hence perhaps I'm unnaturally attuned to sightings of it. I was, however, completely astounded to see a version of it appear on Rhys Darby's pop culture TV programme Rocked the Nation the other night, in a sign held up at a rugby game in about 1990, following Wayne 'Buck' Shelford's dropping from the All Blacks' captaincy.

Here's rather a blurry photo I took off the TV, which I think should henceforth enter the ranks of the Parihaka font's various ancestral iterations. 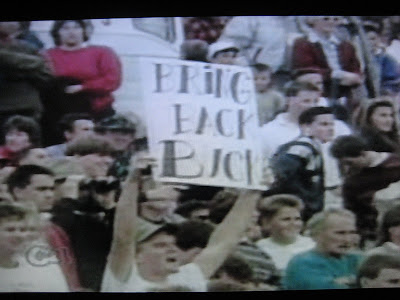 Posted by Cheryl Bernstein at 10:30 AM

I had a crack at the sentimental interpretation of history behind the Parihaka peace festival and the Art of Passive Resistance project a couple of years ago: