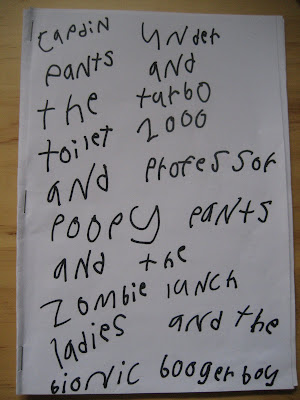 The small guy has been at it again: his own version of the Captain Underpants franchise continues its theme of crime and just retribution with a recent excursion into the very topical UFOlogical genre, with the completion of Captain Underpants and the Turbo Toilet 2000 and Professor Poopy Pants and the Zombie Lunch Ladies and the Bionic Booger Boy.

Once at Jerome Horwitz Elementary School George and Harold saw a UFO.
'Oh no!' they said.
It landed in the playground. Out popped Professor Poopy Pants and the Turbo Toilet 2000.
Then another UFO came, and landed on the school. Out popped the Zombie Lunch Ladies and the Bionic Booger Boy.
Then George and Harold got some kids to help.
They got the Turbo Plunger 3000 out.
The villains were scared.
They ran.
To the UFO.
But the door was stuck.
They were sent to jail. The police said 'Thank you.'
The End. 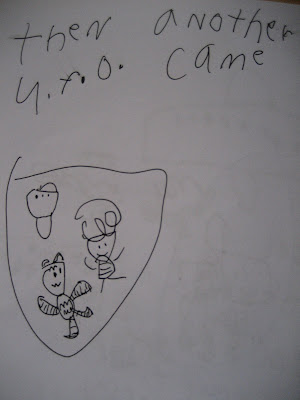 Posted by Cheryl Bernstein at 2:02 PM

The title might have to be shortened a little for the movie adaptation. The small guy can take heart in the fact that they used do that to Philip Dick as well.

Gasp - I was signed in as my partner just then. Apple bogies.