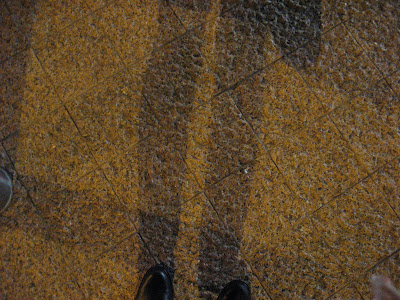 
Yesterday evening a friend and I drove into town to photograph Fiona Pardington's new illuminated billboard, installed a couple of days ago on the Worcester Street facade of the Christchurch Art Gallery. The image is Pardington's photograph of a small hand-blown glass ship, enlarged to monumental public scale. It looks strong in the daytime, but enters another dimension by night.

Fiona Pardington (Ngai Tahu) came across the glass ship among the collections of Canterbury Museum: it's a model of the Charlotte Jane, the first to arrive of the First Four Ships which brought out the British colonists to the Canterbury Settlement in 1850. The model was made by one of the descendants of the original settlers. When I was growing up in Christchurch in the 1980s, there was still considerable concern -- in a certain quarter of town at least -- over whether your ancestors had come out on one of the First Four Ships. Like going to Christ's College or casually mentioning that you were planning to take the Range up to the snow in the weekend, having a family connection to the First Four Ships was a decisive shorthand for being posh in Christchurch: more than anything it denoted old money, political power and the distinct probability of driving down major arterial roads bearing one's family name.

Living here again in 2009, I sense that the First Four Ships fetish seems to have receded a bit as history sails inexorably on; but it lurks there still, hoving into view like a Lovecraftian ghost ship every now and again.

I took the photograph below looking up at Fiona Pardington's backlit billboard from the pavement. 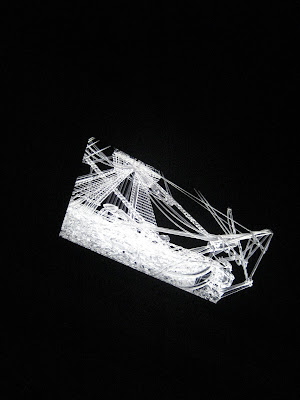 The first person to push past the steerage passengers and stagger down the gangplank of the Charlotte Jane at 10am on 16 December 1850 after 99 days at sea was the man who became the first Superintendent of Canterbury province, James Edward Fitzgerald.* Fitzgerald was later involved in national politics, and advocated equal civil and political rights for all New Zealanders regardless of race, including the right for Māori to be involved in government and to retain their own lands. Oddly enough, he had previously been Assistant Secretary of the British Museum; an appropriate enough profession, one might argue, for one of the founding fathers of a deeply conservative and dusty city often described by the credulous or untravelled as more English than the English; a city which since Fitzgerald's time has increasingly been developed as a themepark of itself, its willow trees flanking the shallow river, its punts, straw boaters, striped blazers, Devonshire teas and Gothic Revival architecture creating not only a visual identity but a steady income from tourists.

The founder of the Christchurch Press, Fitzgerald was later able to use his newspaper as a vehicle to attack the plans of fellow colonist William Moorhouse to bore a rail tunnel through the Port Hills to link the city and the port, largely because of the enormous costs involved. The Press is still commonly used by its citizenry to scupper significant civic projects today. 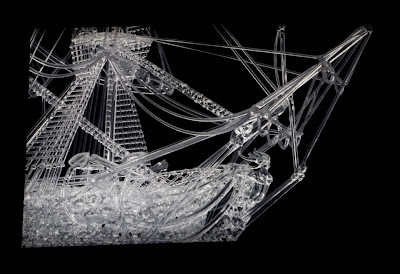 Here's a photograph of Fiona Pardington's image The Prow of the Charlotte Jane with the night closing in around it. There is a strange effect whereby the image, spectral white on black, looks at first glance to be a negative. On the monumental scale of the street, the delicate glass rigging of the model appears like real ropes encrusted with ice, like one of the early Antarctic explorers' ships which left from nearby Sumner. The ghosts and shadows of the early years of the colony, the precarious voyages and provisional structures and scale models of elsewhere still present in the fabric of the city, are summoned by Pardington's work. 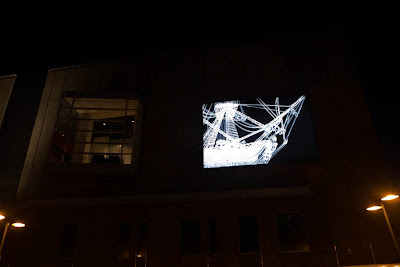 This shot above is taken from across the Boulevard. Yesterday evening the lights in the newly revamped, not-yet-open collection galleries were on, and the oriel window was illuminated. A stack of gallery furniture waited in the window, upturned chair legs silhouetted like a four-masted black schooner. A pirate hulk on one side, and the pearly white ship of the British colonists on the other. For a moment as darkness fell, the illuminated window and the backlit billboard appeared like positive and negative versions of one another.


Neil Pardington kindly allowed me to use his photographs (numbers 3 and 4 above) of Fiona Pardington's billboard for this post. His exhibition 'The Vault', a series of large-scale photographs taken behind the scenes in New Zealand museums and art galleries, is currently on display at Christchurch Art Gallery before it tours nationally.

*Characteristically enough, Fitzgerald's sharp elbows were in play again for the opening of the winding hill road connecting Lyttelton with Sumner, when he was the first to drive over it, in his dog cart.
Posted by Cheryl Bernstein at 2:06 PM

"increasingly ... developed as a themepark of itself".

Brava. I couldn't have put it better.