The West Coast: Not as bad as it used to be 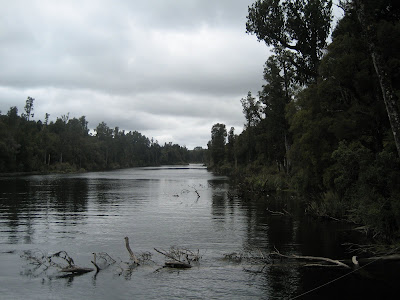 It is no secret that the West Coast and I are not friends. Our dislike of one another is entirely mutual and goes back almost thirty years. It was born out of various family holidays from which I was delighted to return; the sort of depressing minibreak on which one family member is coming down with something nasty, someone else has forgotten to pack something essential, two people are ignoring one another and everyone has the hump with someone else. Although this kind of break usually only lasts a couple of days, at the time it seems interminable. A vague air of anxiety closes in with the weather. The days cannot end quickly enough. The night sounds include the rumbling of the coal trains, an unidentified drip, and distant howls. At the half-way point it appears likely that the toilet paper will run out before the end of the stay; dinner consists of corned beef and mashed spuds with grey lumps; there is no TV; and the only thing to read in the mis-named 'holiday house' is a dog-eared copy of Papillon with the final page ripped out.

I know that there are some people who enjoy the long slog across the plains and over the mountains, whose idea of a pleasant getaway is a weekend in an uninsulated wooden cottage with a longdrop toilet 50 yards away up a hill; people who are unconcerned by relentless rain and sandflies as big as small dogs; people who positively thrive on the challenge of a day-long muddy hike up a scrub-clad mountainside in order to have a vile cup of tea with Germans in a small hut. I know there are people like this, and to them I say: you are most welcome to the West Coast.

I am not one of those people, and so for many years now I have been more than happy to stay firmly put on the eastern side of the main divide. In the weekend, however, I took a drive over the mountains to the Coast for the first time in more than 15 years. It was a family occasion, and it may be that my expectations were not high, but in the end I was quite pleasantly surprised: the West Coast is not as bad as it used to be. It still doesn't meet my definition of civilisation, vis: a place offering (a) the ability to buy a good cup of coffee, in conjunction with (b) the chance of being able to speak to someone who has read the same books as oneself, but on this trip at least there were no sandflies, the rain let up every now and again and there was a copy of Lawrence Durrell's Complete Antrobus in the bach.

At Moana, in the playground of a school by the edge of Lake Brunner, I photographed this concrete wall. The wall, if not my photograph, reminded me of images by Peter Peryer, as well as Julian Dashper's drumskin target paintings. 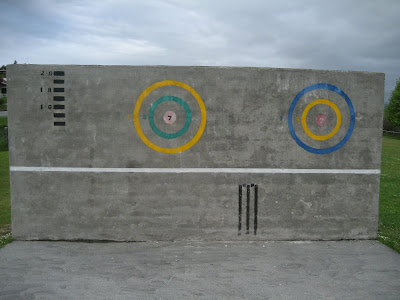 There isn't a lot of art to be found on the Coast, of course: that's not the point of it, I suppose. There's an art gallery at Otira (which has 'Contemporary' written sideways on it in a sans-serif font, Shed-11-in-the mid-80s-style). It seems so unlikely that it commands attention, and if it hadn't been shut, we might well have stopped. But it would be hard to compete art-wise with the experience of driving through the Otira Gorge these days: the new roadway engineering (a gigantic viaduct over a scree slope hundreds of feet high, a waterfall channelled across and over the road, a concrete rock shelter) is genuinely impressive and reduces not only the duration of the journey but also both the spew factor and the chance of death, which always used to feel quite considerable. If they ever set a James Bond film in New Zealand, the Otira Gorge would be the perfect backdrop for some very foolish stunt driving and perhaps a parachute chase.

On our way back across the plains heading towards Springfield, there were roadworks. At one point we were led through the works by a 'pilot car'. I've never come across this before. It seemed so utterly ridiculous that we couldn't stop laughing at it; we felt as if we had been co-opted into some peculiar work of relational aesthetics dreamed up by the road crew, cars following close in an Austin Powers-esque conga line on the Canterbury plains. 'Poot poot! Follow me.' 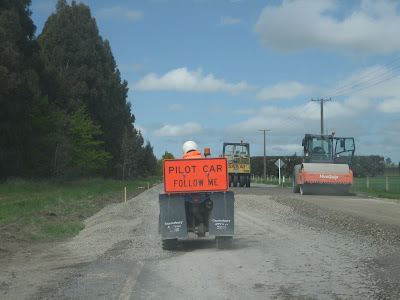 Or maybe I was just happy to be on the home road.

At Springfield we slowed to see the remains of the giant doughnut, erected a couple of years ago to celebrate the release of The Simpsons Movie. The fibreglass doughnut has been, like any work of public art, quite controversial: it has divided the small town between those people who think it amusing and a positive drawcard for tourists, and those who consider it an eyesore. It now resides on private land beside the main road, after its temporary resource consent ran out and the council gave it its marching orders. A little while ago, someone -- presumably someone in the 'eyesore' camp -- set fire to it. The locals have threatened to rebuild it in concrete to foil future vandals, but for now the doughnut stands as it is, battered but triumphant.

As we passed, I applied my usual test as regards the worth of a public artwork: Is it better than nothing at all would be in the same spot? And in the case of the Springfield doughnut, after a great deal of consideration, I think yes, it is. 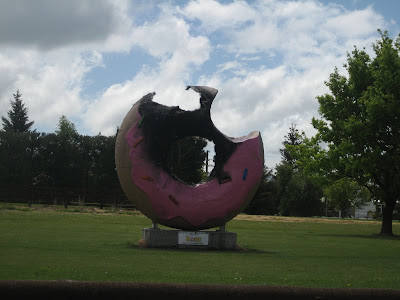 Posted by Cheryl Bernstein at 1:51 PM

The West Coast and the provinces may yet be your salvation, if the post about Cass is anything to go by.