Dispatches from an earthquake zone

Some post-earthquake photographs I've taken in and around the city over the past couple of days.

I took the first series through the car window, driving past the old brick Methodist church on the corner of Rugby Street and Papanui Road in Merivale on Saturday morning. The crane is lifting off the spire. 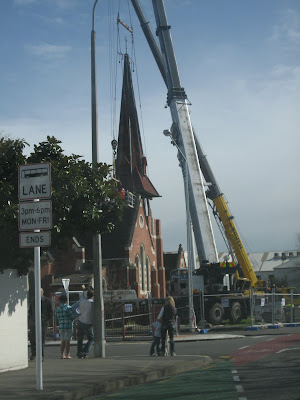 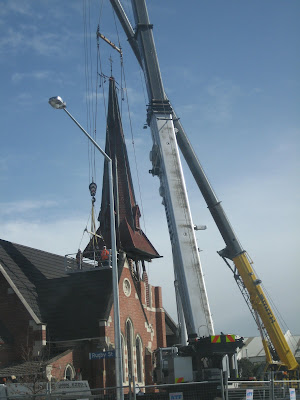 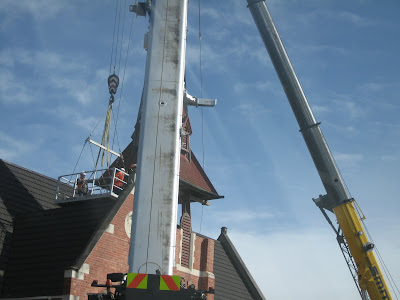 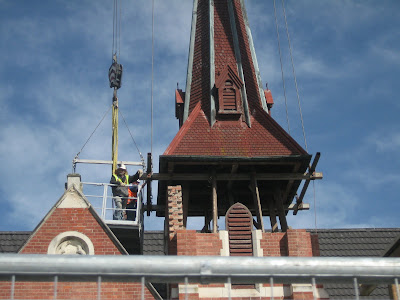 Notice on the door of our favourite Christchurch cafe, C1 Espresso in High Street. 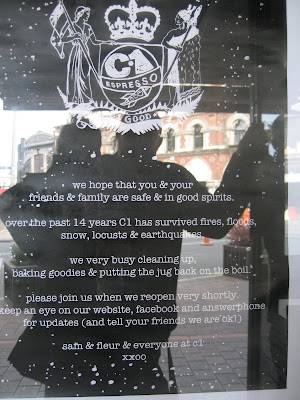 The historic facade of the McKenzie and Willis building, built in Venetian Gothic style. You can see the red 'unsafe' sticker at lower left. While we watched, a man in fluoros and a hard hat appeared briefly in an upper window. He was welding a steel support structure in place. Above the corbels on the second storey, you can see the metal bracing which has been temporarily installed in the hope that this building, one of the architectural treasures of Christchurch, may be saved. 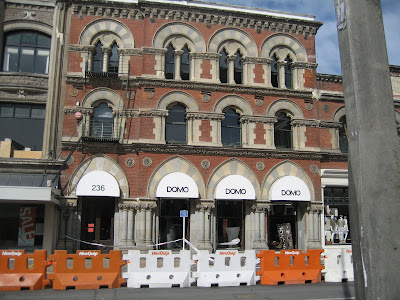 The army guard Tuam Street, a no-go area. In the background behind the bike shop is the 132-year-old Odeon Cinema, the last surviving historic picture palace in the central city. (Of course, it wasn't the earthquake that knocked down the others, but short-sighted development.) Originally built as a theatre, I think for vaudeville, the 700-seater Odeon closed as a cinema in 1983 (the last movie I saw there was Time Bandits), but has been remarkably well-preserved. There have been moves to reinvent it as an arts venue, but I'd rather see it returned to its glory as a movie theatre: it could be Christchurch's version of the Embassy or the Civic. 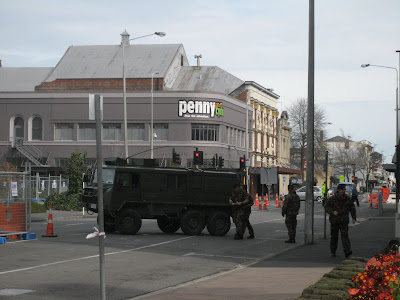 Meanwhile may I recommend a new blog, written by my friend the musician/academic Ed Muzik/James Dann: Rebuilding Christchurch.
Posted by Cheryl Bernstein at 7:57 AM

I'm so happy to see C1 has survived. When I next come to Christchurch, that will be my first stop.

Thanks for the photos.

James: I understand C1's open as of this morning for coffee, food, and the swapping of near-death experiences. Here's footage from the aftershock on Wednesday morning at the cafe.