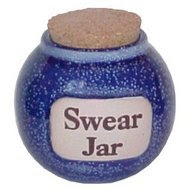 I came across this important document the other day: the New Zealand Broadcasting Standards' Guide to the Acceptability of Words on Television and Radio, 2010 [PDF].* It's an interesting index to the cultural changes in New Zealand society over the past decade, if you go in for that sort of thing. Or if you simply appreciate long lists of rude words published by a government body.

Comparison with a similar list issued by the BBC in 2006 is instructive: Britons and New Zealanders agree on the rudest word of all, but otherwise there are considerable cultural differences, most notably as regards the relative offensiveness of 'wanker', the taking of the Lord's name in vain (far more shocking in New Zealand), and the various Britishisms ('sodding', 'shag', 'spastic' etc) which don't merit a mention on the antipodean list. While saying 'bollocks' is still quite rude in England, apparently, it's no problem at all in New Zealand: the respondents to the NZ BSA's survey believe 'bullshit' to be far ruder than 'bollocks', and 'bastard' considerably ruder than both of them.

There's probably a thesis topic to be developed in an analysis of the social changes reflected by the unacceptability of words over time, or in an international comparison of the valence of unacceptable words: a kind of Big Mac Index to cultural vulgarity. I'm a bit busy at the moment, but I'd love to read it.

The trend is definitely downwards, however: what offended New Zealanders in 1999 hardly ruffles a feather today. Which begs the question, once again: if swearing is increasingly socially acceptable, and everyone's doing it, where's the fun in it?


*via Sacha Dylan.
Posted by Cheryl Bernstein at 2:05 PM

For me, the question is; if people are becoming more accepting over time, does that mean that the C word will soon become accepted, or more accepted, and if so, what will replace it at the top of the most-hated list? I have no 'evidence' for this, but the evolution of the taboo word might go something like this:

So in looking for a new, more offensive than the c word word, we need something that is four letters, one syllable, and describes either a body part or a primal action that is taboo. I've been wondering about this for some time. My personal choice is 'flaps', though I realise it is one letter too long, and it really is the turn to have something male taking the top spot.

Maybe you should invent some new swear words. It seems all the newer ones are either combos of 2 other ones, or slurred versions of ones that already exist.

If you've seen "Fantastic Mr. Fox" the characters all swear, but rather than actually use fuck, they substitute the word "Cuss" as in "Don't Cuss with me, I'm out of my Cussing mind over here."

Adults get it, kids can watch it, and it gets past the censors. Words are just words.