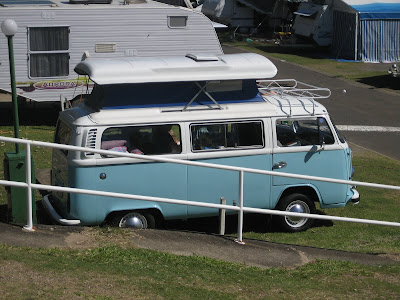 In my experience, holidays can be divided into two predominant types: cultural, where the object is travelling vast distances to look intently at rare and special things; and actual, where the object is to keep one's eyes closed for as long as possible while lying on the beach in the sun and pretending not to hear the children asking for drinks.

Many holidays taken during my English childhood were of the former 'cultural' category, and involved my family packed into a pop-top VW Combi van (known ominously as The Dormobile), sitting in a campsite somewhere in the home counties waiting for the rain to lift so that we could visit a historic house and garden. The vehicle was stuffy, and had a roaring engine, and I suffered reliably from travel sickness in any particularly winding bits. At night, my parents slept on the bench seats pushed together to make a double mattress (a brown tartan pattern): my brother and I were hoisted on to the swing-out canvas bunks above. We ate corned beef. The Dormobile smelled of kerosine from the tiny camp stove. There were always naked Germans in the toilet block. There were moments when everyone was quite cross with everyone else. It was not altogether jolly.

Even now when I see a Combi I come out in a sweat. Visiting Michael Parekowhai's The Big OE (2006) on Te Papa's roof required considerable personal courage.

We've recently returned from a few days' holiday in Queensland, which was definitely of the latter variety. Not much culture, but plenty of sandy shut-eye. And importantly: no earthquakes. (Or Combis.) 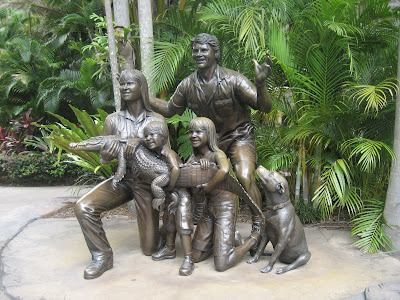 Although we didn't travel in search of culture, culture found us in the most unexpected places. Here is Queensland's favourite Crocodile Hunting family and their pets immortalised in several tonnes of bronze at Australia Zoo. 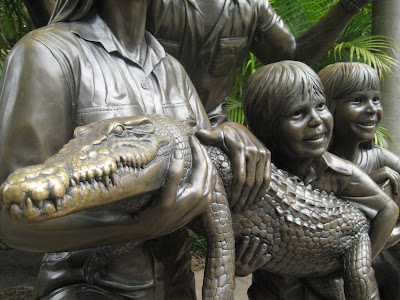 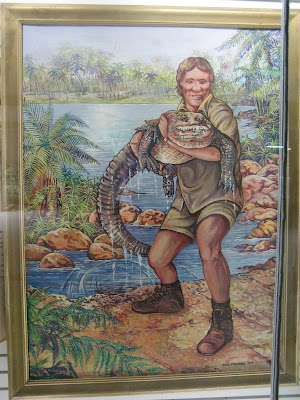 A painting of the Crocodile Hunter sent to the Zoo by a fan. The eyes in particular capture a certain something. 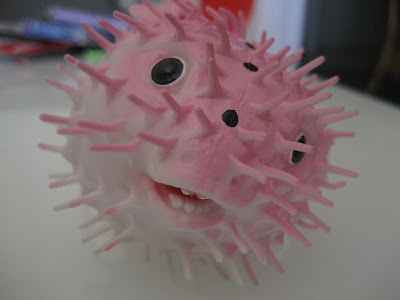 There's definitely something of Ronnie van Hout's robot teeth about this squeaky pufferfish. 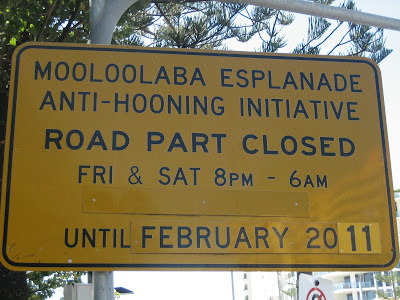 We have those ridiculous new "No Cruising" signs in the central city in Christchurch now. But in Queensland, they don't beat about the bush: there they call it by its proper Antipodean name. I find Australians on the whole very congenial: they're like New Zealanders with assertiveness training. "Anti-Hooning Initiative" would be an excellent name for something or other, perhaps a novel or an exhibition or a band. 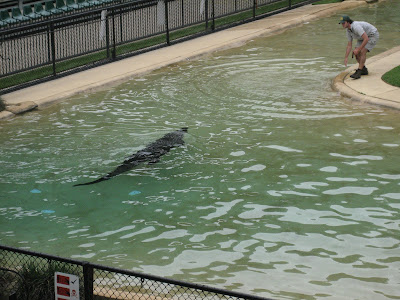 At Australia Zoo's very impressive Crocoseum, I was intrigued by the presenter's description of crocodiles as the 'Apex Predator'. Inevitably my mind turned to wondering which member of the New Zealand artworld might be described accordingly, and thus another pleasant five minutes passed. 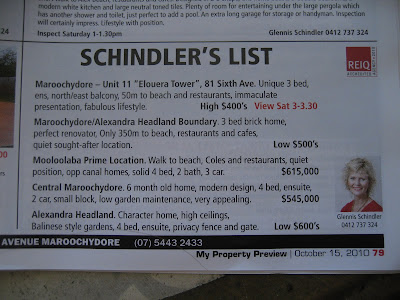 Some people might consider this ad for a Queensland realtor to be in poor taste. 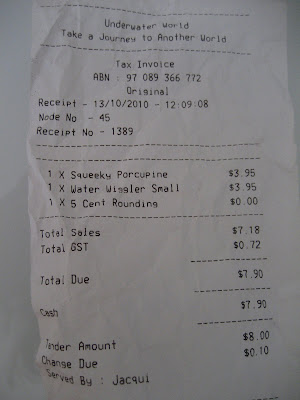 A receipt for some cultural merch. 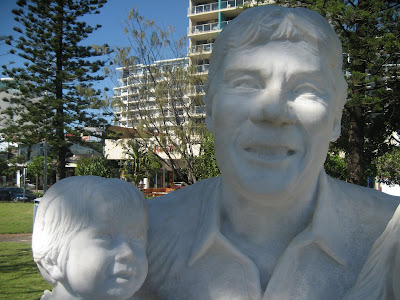 The second artwork we found commemorating the Crocodile Hunter, this time in Queensland marble. (There are no doubt many more, which would make an interesting photoessay sometime, although then the holiday would be in grave danger of segueing into the 'cultural' category given the research and inconvenient travel involved.) Again, the eyes have it. 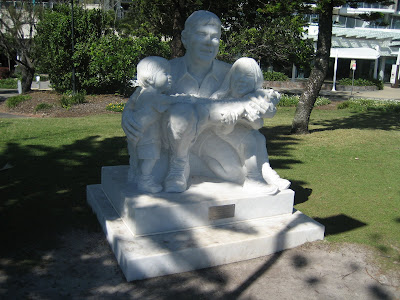 The grass is worn away around the base by visitors' feet. 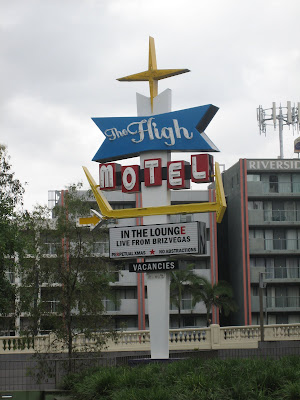 And at the end of the trip, half a day in Brisbane at GOMA. The work above is Scott Redford's 10-metre-high The High / Perpetual Xmas, No Abstractions, which refers to the pop culture icons of the Gold Coast's glorious past (though is influenced in its design by a sign he saw in Yukon, Oklahoma). Apparently it has confused many tourists, who have enquired of GOMA staff where the motel is.

Back home now in Shaky Town, where, I read, the aftershocks might conceivably go on for up to a year. A Combi might well start to look like a good option.
Posted by Cheryl Bernstein at 9:56 AM

Some years ago, two friends and I kept a loose association called the Joan Crawford Ladies League. One of our trio was much enamoured of Steve Irwin's particular form of cheerful masculinity. Following his tragic death, I and the other member of the league made our fellow member a Steve Irwin memorial clock, for which we printed out pictures of Irwin and pasted them as a collage over the face of a cheap wall clock. The clock sadly never worked again under the weight of multiple copies of Irwin's features, but it was, I think, a fitting memorial.

I will definitely feature the Steve Irwin Memorial Collage Clock should I proceed with the photo-essay, HB.

On another matter, I have received a truly disgraceful suggestion from an anonymous commentator regarding the proposed identity of New Zealand art's Apex Predator. So disgraceful, in fact, that I'd better not post the comment. But I did enjoy the suggestion.

I love the phrase "anti-hooning initiative". It says exactly what needs to be said, and leaves "cruising" for those of us who enjoy a leisurely cruise.

Bonus thrill: I write this from Brisvegas. I saw the faux motel sign as I waited in line for Valentino tix (before giving up and seeing the other art for free).

My favourite - the display of teeth in bronze, most especially the crocs!