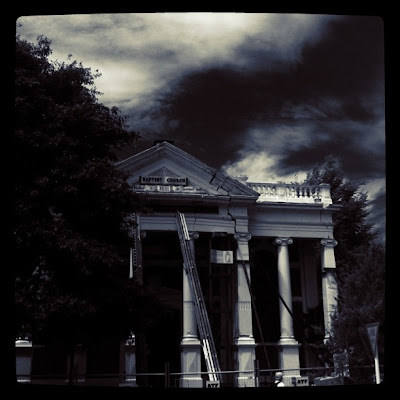 A recent photo I took of the Baptist Church on the corner of Madras Street and Oxford Terrace, in the centre of Christchurch. Sited next to the central Fire Station, the Baptist Church is close to the monument to the 911 NYC fire-fighters, a large-scale public work by Graham Bennett constructed from horribly twisted steel girders from the World Trade Centre. It seems these days that half of central Christchurch is either a ruin or a monument, or both.

Completed in 1882, the Oxford Terrace Baptist Church was designed by early Christchurch architect Edward J Saunders (who, the Historic Places Trust notes, had been a local surveyor in Canterbury in the 1860s, but was dismissed for "incompetence and habitual intoxication"). Twenty years later Saunders won a competition for a 'neo-classical preaching hall'; the Gothic Revival style which dominates Christchurch's church architecture had dubious associations with papery, and with the unspeakable 'bells and smells' of High Anglicanism, which the small yet strong-minded group of Canterbury Baptists were eager to avoid. Saunders's original winning design, for which he had received 25 pounds, was radically pruned to reduce costs, losing a vestry and organ gallery. I understand from architect friends that this remains the common fate of innovative architectural designs to this day.

Sanders's building, which is included on the Historic Places Trust's Category 1 Register, was severely damaged by the earthquake on 4 September last year, and has an uncertain future. It has huge open cracks across the pediment and entablature, and is currently supported by massive props.
Posted by Cheryl Bernstein at 1:37 PM

little did we know what was to come! Just saw today it is completely gone now...