The week of magical thinking

This time, when the earthquake came, it was just after lunch and I was at home, in the lounge with my daughter. She was watching children's TV. I was writing notes for a talk about the possible futures of public art in Christchurch. At 12.48pm, I sent a tweet.

If you have the misfortune to experience a major earthquake, and the great good fortune to live through it, you will know that there is no warning, no gradual build-up, no time to plan or prepare or even think. You will know that the violence is immediate. Last time the quake came across the plains like a thief in the night, like a band of raiders in a cloud of dust, vast and powerful and inexorable like a great ship in drydock let slip from failed moorings. It was a clear cold night in September, and the sky was powdered with stars. We stumbled around afterwards for many hours as if in a dream, one of those terrible phantoms of the subconscious whose invisible bonds you struggle to wake from. Real life started again with the dawn. This time the quake came in broad daylight with the numbing certainty of a car crash. The sun was shining. The TV was on. My daughter had a spoon to her mouth. She was laughing. I was wrestling with a paragraph. And then time slowed, as the ground accelerated beyond the pull of gravity.

Just after a major quake, it is very hard to concentrate or even think. You operate on instinct. An ancient animal part of the brain takes over. When the shaking stops, you check that you are alive. You check that people around you are alive. Then you look around to find a safe place, an escape route, firm ground on which to stand. You decide what to do next. You do what you can. You are still, and time is suspended; and then you start moving.

A minute later, I looked up. The house was standing. The terrible shaking had died away. The power was off. Silence fell. I held my daughter. I stood up from the doorway where I'd crouched over her. A huge pane of glass from the front porch slid to the ground behind us. The phone lines were down. I sent a text to N anyway. We're OK, I said. We're going to school now. I found my shoes. I sent a tweet. It seemed important to say something. I stood there stupidly, the phone in my hand. Only three words came. I added a full stop and the #eqnz hash-tag. It felt unsatisfactory, but there were no more words. We left the house.

In this wordless primitive state, I made the remarkably poor decision to drive to school, rather than walk. As I backed out of our drive, the car bucked and yawed like a small boat in rough seas. I thought we had a flat tyre, perhaps a broken axle. Behind us the power lines were bouncing in a parabolic arc like a child's skipping rope. We carried on. The roads were broken, choked with cars, the traffic lights out. I saw the father of an old school friend of mine, on the street outside his house. His hand was held to his mouth. An unmarked police car accelerated down the road at speed, a blue light flashing on its dashboard. The wail of sirens rose. "Look! There's Allen Curnow's house! Is the doggie there?" said my daughter, as we passed its laurel hedge. We waded through a couple of inches of dirty whitish-brown water, flowing down the street like a river. At school the children were sitting in their class groups on the field. The teachers stood by them, holding clip boards. The headmaster carried an old-fashioned megaphone.

The small guy was sitting quietly, his arms and legs folded, next to a friend. He was wearing his school hat. The friend was crying.

"Hi Mum," he said. "Did you know there's been a big earthquake?" 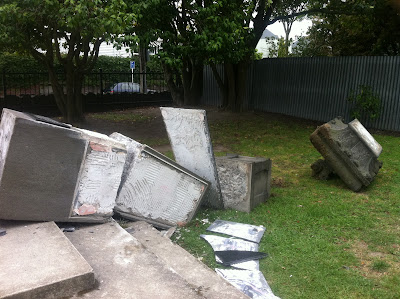 We sat on the school field for a while. I felt as if I was waiting for something. I had other people's children sobbing in my arms while my children played under the old trees nearby. Every so often the small guy waved reassuringly to me. The stone war memorial had toppled over and lay smashed. The water had leapt out of the school pool. The soft earth under the grass trembled like a jelly. A light rain began to fall. A friend came over, tears streaming down her face, her eyes wide open. "I can't get hold of Ben!" she said in a tone of deep foreboding. It'll be OK, I said. The phone lines are down. I can't get hold of N, but I know that he'll be all right, and so will Ben. It will be all right.

Later, after more mothers had arrived and taken their children and the crowd was starting to thin out we drove home, the traffic at a crawl. I saw a woman in a business suit and four inch heels picking her way across the silt and liquefaction on Heaton Street. Cars described a slow arc around a sinkhole that had opened up near the park. Our neighbours were out on the street. One got on with the business of demolishing what was left of his front wall. "I've just come from town," said Andrew, "and it's bad there. I hitched a ride, but it was quicker to walk. I watched the CTV building come down, out of the office window. It just fell down. And that old church across Latimer Square; there's nothing left of it. Just a pile of stones. I think a lot of people have died." He paused. "If N doesn't come home soon, come round to our place." 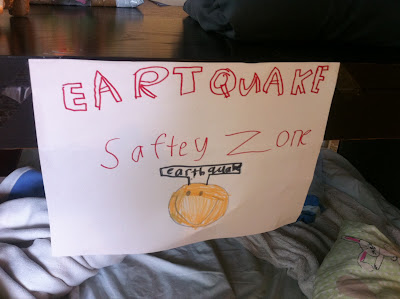 When N arrived home some hours later, his face was white and the shirt was sticking to his back. He shook his head. His feet ached from the long walk home. That night, the children slept on mattresses under our solid oak dining table. The small guy made a sign for the table, as he did once before, back in September. We slept on a fold-out couch nearby. The house creaked and grumbled around us as aftershocks rolled through.

When the power came back on, we watched TV images of the city. Buildings I'd grown up with lay in ruins. Hundreds of people were missing. Smoke rose from the rubble. Clearly I am not a religious person; but when I saw the broken cathedral I cried. 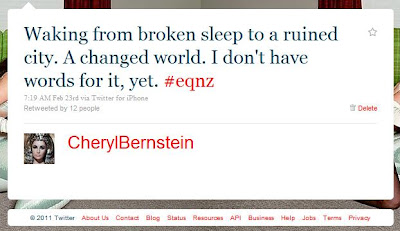 I spoke to my father on the phone. "It's like the Blitz," he said.

Both my parents were war babies. My father was born in 1940 and some of his earliest memories are of bombs falling on London, and long dull hours spent in the air-raid shelter. My mother was born in 1942 in the school-house in Ecclesbourne Road, Islington; her grandfather was the school-keeper. Evacuated with her mother, she spent the War with her cousins in a fishing village in Essex. She was four years old when she met her father, on his return from the front in Egypt. My parents grew up in the East End and North London amid the rubble. Weeds and rubbish accumulated in the vacant lots among rows of Victorian terraced houses built for industrial workers. Eventually, whole streets were knocked down and communities destroyed to make way for the new modernist high rise housing estates. All through my peripatetic childhood  -- we'd lived in three countries and six houses by the time I turned twelve -- my parents would tell us to tidy up our bedrooms by commenting that it looked like a bomb had hit it. "It's a bloody bomb site! Clean it up." 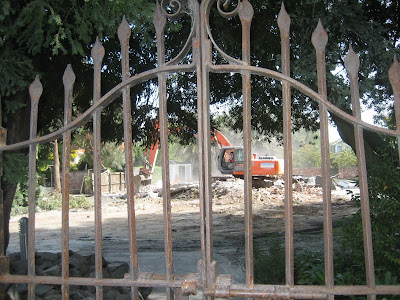 The thing I've read about the Blitz is that you never quite knew what was going to happen next. There would be nights without bombs falling, when you might almost forget that there was a war on; and then nights of relentless bombardment, when the ground shook and the air became super-heated and people died in their beds and on the streets. You never hear the one that hits you, the saying went. But if it had your number on it, then it would get you. No matter where you were, or what you did. If your number was up, then it was your turn to go. 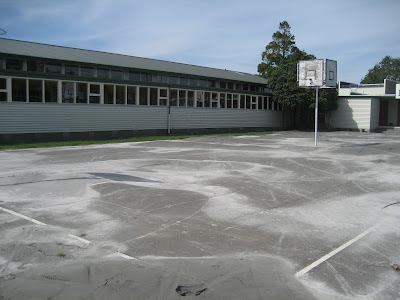 There are many things I can't bring myself to think, or to say, or to write. I expend considerable effort trying not to imagine anything worse than what has already happened. I am trying to think sensibly about cause and effect. The central city looks like a war zone. Yesterday I went for a bike ride round the streets of Merivale, the suburb where we now live and where I spent my teenage years. Graders have pushed piles of silt 10 foot high to the sides of the roads. Eddies of foul-smelling white dust are billowing everywhere as the silt dries. The dust gets in your eyes and your nose. You taste grit in your mouth. I biked through the deserted grounds of Heaton Intermediate, where the basketball courts are a lunar landscape of sand mountains. The flag at the tennis club flapped listlessly at half-mast. Out on Papanui Road, the half-timbered and brick stately Arts and Crafts homes designed by Miles Warren's mentor, the architect Cecil Wood, lie in ruins. Last time people felt phantom aftershocks, but this time there's none. 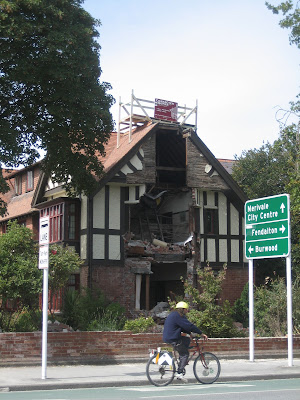 The earthquake on 22 February took people, and it took buildings. All the haunted literary Gothic places. Christchurchness. The earthquake took the city's history. The past that persisted in the present has gone, lost in a pile of rubble. Our history is now history. It's a new way of life, ahead. 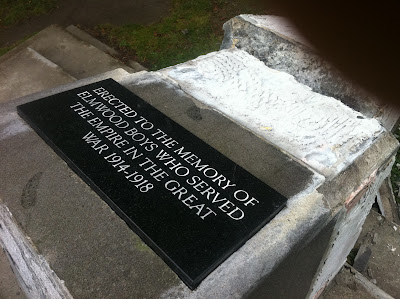 Posted by Cheryl Bernstein at 10:42 AM

Really poignant and beautiful. I will admit that Christchurch isn't my favourite city in New Zealand (my favourite country), but it still fills my heart with deep sorrow to see a place I spent some time in so ravaged and broken. Healing will take countless years, but I hope it comes eventually to your city. I did love the cathedral very much however, and here is my photo I took a number of years back during a one-year stay in your most wonderful of countries.

From a long way away,

A fantastic piece of writing thanks Cheryl... we could only imagine how awful it felt before but now we have a clearer picture.

Not the sort of thing we ever want to feel mind.

Be brave, lots of love from your friends in Wellington

Stunning post, Cheryl. Thank you for writing it. Here in Wellington I, and so many others, wonder what more I could be doing. And in the meantime, I send love.

Beautiful post, Cheryl - I am posting a link to it on my blog, if that is okay. I lived in Christchurch for eight years (after a nomadic existence similar to yours) and we moved to Texas a month before the September quake.

some link it throws out and finds in us -

I was at my desk in the office, it was soon after that Wellington tweets saying 'woah, earthquake' started coming in.

There was a pause before a couple of people in Christchurch tweeted, generally along the lines of your 'fucking christ' one, while everyone in the office was getting wind that something gut churning had happened down south. It seems like a terrible pause, thinking about it now.

Thanks for writing this post; I'm really glad you and your family are OK.