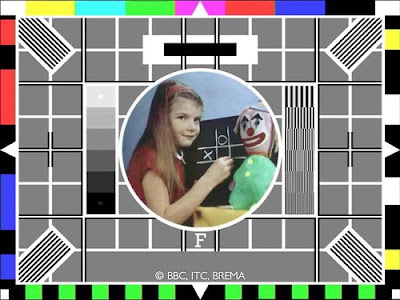 I spent a lot of time as a child looking at the picture above: it's 'Test Pattern F', which the BBC used as its off the air placeholder -- the TV equivalent of a .404 file not found message -- from the late 1960s. Originally of course we saw it in black and white, and it took me years to understand that it was a still photograph: as a child I thought the girl in the image was keeping very still indeed, and I would scrutinise it for long periods to see if I could spot her moving, scratching her nose or something while I blinked. When we finally got a colour TV in the mid-1970s, somehow I was astounded to see that it was actually a colour image.

The original photograph was taken in 1967 by BBC engineer George Hersee of his daughter Carole, who brought along her clown doll Bubbles (whom I always found a bit creepy: perhaps marking the start of my clown phobia) to the studio for the photoshoot. Carole Hersee was paid 100 pounds without royalties for the use of her image, which appeared on TV for an estimated total of 70,000 hours, equivalent to nearly eight years screen time. She got a lot of fan mail as a child, and was once asked to open a dog show. (The BBC recently brought Test Card F back on its HD channels, to help viewers tune their screens: the 'X' of the noughts and crosses game board is in the exact centre of the image.)

Meanwhile, unless something enormous breaks in the New Zealand art world I'm off the air myself this week, while I climb a mountain of work. Stay tuned, and see you back here on the 16th March when normal transmission will resume.
Posted by Cheryl Bernstein at 9:37 AM

Yes creepy and enough so that it was used in the series Life on Mars as a nasty and disturbing interlude.