A little something for the weekend 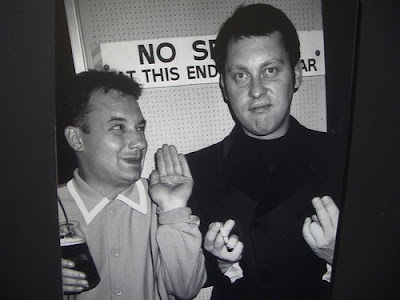 Vic Reeves and Bob Mortimer, photo from Flickr by Dullhunk

Ten years ago, I had a date with Reeves and Mortimer most Thursday nights. Billing themselves as the 'alternative to alternative comedy', they were less a circuit-breaker than the latest incarnation of a long tradition of two-man visual and verbal comedy; the direct descendants of Eric and Ernie on the one hand, and Rik Mayall and Adrian Edmondson in their early Young Ones days on the other. R&M's brand of humour was quintessentially British, surreal and slapstick in equal parts. A typical episode would see them bashing one another over the head with giant frying pans while spouting ridiculous Dadaist non sequiturs -- "Like a badger with an afro, throwing sparklers at the pope!" "Like Bono in a boob-tube on the choir master's lap!" -- or stopping to argue in great detail over some pointless matter of terminology, vis:

After recently revealed aliens have stopped police in their tracks:
Bob: "What's going on?"
Vic: "He's just frozen them with his special eyeballs so now we've got to get them into that booth."
Bob: "That's not a booth, that's a kiosk."
Vic: "No it's not, there's no shelving in it."
Bob: "No, a kiosk has a counter. Shelving, you're thinking of a pantry."
Vic: "So what's a kiosk without shelving or a counter?"
Bob: "That's a booth."
Vic: "Exactly."
Alien: "Howay yous two! Them's only frozen for thirty seconds!"

Now of course Reeves and Mortimer are a couple of big sellouts, hosting mainstream panel games on TV and radio and appearing on I'm a Celebrity, Get me out of here. But remembering how good they were back in the day, I'm really quite intrigued by the recent re-rentry into the artworld of the once self-styled Darlington Dadaist, who became a comedian after leaving art school: a couple of years ago Reeves's works were shown at Whitechapel, while Jake and Dinos Chapman describe Reeves's art as “able to command our laughter as a purgative, to encourage the viewer to leak at both ends”. I think the works are OK, actually, although maybe a bit less Dadaist than you'd expect. But maybe it's just that I'm imagining them as the backdrop to a serious bit of tomfoolery. You can decide for yourself with eleven of his paintings reproduced here, including Luftwaffe Love School.
Posted by Cheryl Bernstein at 12:18 PM

I saw a notice of that exhibitiona nd was immeditely reminded of "Shooting Stars" - not exactly a mainstream gameshow with George Dawes etc. UVAVU http://www.youtube.com/watch?v=DCCuOLqwZv8

Pretty good stuff! I always enjoyed it when they sang 'in the club style'. Have been perfecting it myself ever since.

Have just been watching YouTube clips of 'I will survive' and 'in the Jungle' in the Club Style:-)