Behind the ropes at the Museum 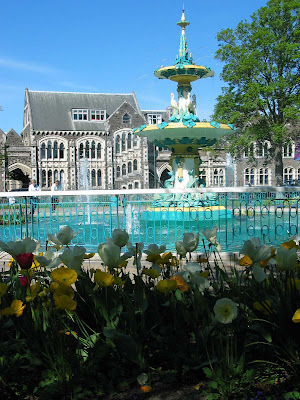 I had a slightly odd experience at Canterbury Museum the day before yesterday. We'd done our usual things, in the usual order:

1. Enter moa-hunter glowworm cave and pop out of the crawl hole;

3. Give Amundsen's enormous and very shiny bronze nose in the Antarctic gallery a quick rub (am hoping the same selective high polish will occur to the notable noses in the Arts Centre's new bronze sculpture park);

4. Admire the stuffed husky dog on its hind legs licking the explorer's Parka; bash forehead on glass looking at the seal mother and pup and the Emperor penguins; consider loudly whether or not (a.) the icy scenes in the dioramas contain real snow; (b.) the stuffed animals were shot by hunters or died of natural causes; (c.) the husky actually died with his tongue poking out; (d.) how you would stuff a tongue;

5. Press the sound buttons outside the early 1970s listening booth and offer a personal interpretation of whale song to other visitors;

6. Shout "Look! A skeleton! A dead person!" as we pass the Egyptian Mummy's tomb;

7. Admire Michael Parekowhai's suite of kowhaiwhai lightboxes through the glass walls of the museum library [actually that's just me, but I insist on it];

8. Disappear under the safety rail surrounding the conversation pit under the spinning globe of the world, and pop up the other side giggling like a lunatic;

9. Gaze in rapt and silent adoration at the dinosaur skeletons for 30 seconds;

10. Enter the Discovery Centre at a furious clip and dive on to the cushioned divans.

After a thoroughly satisfying hour in the Discovery Centre (live tarantulas, pickled snake skeletons, stuffed tropical birds behind black velvet curtains), we left via the bird gallery past the giant Chinese lions, wending our way through the labyrinthine third floor galleries to take the lift back down to the historic street and the foyer. Outside the Victorian room, our path was suddenly blocked by a fat navy blue velvet stanchion which had appeared out of nowhere.

No respecter of barriers in public places, I attempted to steer the buggy around the knot of people bunched uncomfortably behind the stanchion six feet short of the foyer. Immediately a very tense-looking young guy in a black museum T shirt popped up, palm raised in the international 'Stop!' position, and said "Ah, excuse me ma'am, but I can't let you exit the Museum right now."

Ahead a group of well-dressed middle-aged people in suits was filing slowly out of the museum's ridiculously cumbersome exit, which requires the visitor to make two 45 degree turns within the space of a couple of metres. This is in order to accommodate egress of nearly a million people a year through the narrow doorway of architect Benjamin Mountfort's now untouchable Gothic Revival design, just one of the many problematic issues for Canterbury Museum which would have been addressed by architect Ian Athfield's visionary (and to my mind, entirely sympathetic) redevelopment plan, shot dead by the Environment Court a year or so ago. The museum attendant dropped his voice impressively and said, "An important function is going on."

Alarmed, irritated and slightly amused all at once at the notion of being expected to wait for a corporate hirer to leave the museum, I asked what the function (such a great New Zealand term, that; full of self-important bureaucracy and redolent of dusty boredom) was.

"It's the iwi. Rangitane. They've come to collect the bones of their ancestors, and take them home," he said. I realised he was very nervous, and that this was a moment of great significance for the museum. We were waiting for a funeral party to pass. Understanding the solemnity of what was occurring a few feet away, it felt just fine to be behind the velvet ropes.

When we got outside, dozens of people in suits and black clothes were milling about near the brightly planted municipal flowerbeds, snatching a quick chat before boarding two huge coaches. A couple of pairs of big guys carrying large square wooden boxes between them were walking slowly across the pavement. The museum director stood under the Gothic portico, watching the departure. A bare-chested haka party wearing piupius were bracing themselves in the chill autumn air. "Are they warriors?" asked the small guy.

The next day I read in the paper that the bones of more than 60 tipuna were being returned for reburial at the Wairau Bar in Marlborough, where they'd been dug up by museum archeologists about seventy years ago. Possibly New Zealand's oldest human remains, the bones had been dated to the 14th century by a research team from Otago University, including archeologists, anthropologists and biologists who worked in a partnership with the museum and Ngai Tahu. Other archeologists have been working with iwi on the preparation of a new site on the boulder bank of the Wairau Bar for reinterrment of the ancestral remains.

Human remains of one sort or another rest quietly in the collection storage areas of many of New Zealand's museums. Some can already be, or are in the process of being, identified, and are being returned to descendants for burial. Others have lost their identity and are likely to stay behind the scenes at the museum. Apart from the bandaged corpses of ancient Egyptians, it seems, it's no longer seen as appropriate to display dead bodies to the public, which can only be a good thing: although I'm aware of some of the historical and moral complexities around the issue, I can never look at this photograph of the colonial soldier-artist H.G. Robley with his collection of moko mokai, or tattooed heads, without shuddering.

Robley offered his collection of 35 moko mokai to the New Zealand Government for £1,000 in 1908; his offer, however, was refused. Later the bulk of Robley's collection [PDF] was purchased by the American Museum of Natural History in New York, for £1,250. Along with the descendants of Robley, the late Dalvanius Prime began negotiations in 1998 with the Museum of Natural History to repatriate these to New Zealand. Many other human remains have since been returned to New Zealand from public museums, private collections and teaching collections overseas.

I'm pleased that the children and I saw the bones of Rangitane leaving Canterbury Museum on their final journey home to the Wairau Bar. It was something of significance, something to remember. The moment revealed the museum not only in its traditional role as a repository of culturally-significant historical objects, but as an active player in the contemporary culture, responding to the shifting imperatives of the contemporary world. After all, it's not about simply keeping the collection, it's what museums do with their collections that determines their value to society. Even if sometimes that means giving the objects back.
Posted by Cheryl Bernstein at 1:11 PM