It's not very widely known, but Canterbury Museum has quite a good art collection. (The bulk of Christchurch's art collection is housed at its public gallery.) Most of the Museum's art holdings are historical, of course, and relate to the early days of the Canterbury settlement; but there are also some great contemporary New Zealand works tucked away, including a silver epergne by Tony de Lautour and a series of Michael Parekowhai's kowhaiwhai lightboxes permanently hung in the research library.

When Canterbury Museum's rebuilding project was put on hold in 2006 after being declined resource consent (the plans involved architectural changes made to the A-listed historic building designed by Benjamin Mountfort), its proposal to take over the old Robert McDougall Art Gallery building next door, which had recently fallen vacant due to the building of the new gallery, also foundered. The plan, as I understand it, was to use the beautiful old neo-classical gallery building for temporary and touring exhibitions, and also to exhibit what the museum until quite recently quaintly referred to as its "Picture Collection". (Can't find any reference to that on its website -- but then there's hardly reference to anything much at all. Time for an upgrade, chaps.)

Anyway, in conjunction with the Ellerslie Flower Show in Hagley Park later in the year, the Museum is using the old gallery building to exhibit the complete set of Banks' Florilegium, the engravings made from the botanical specimens collected by botanists Joseph Banks and Daniel Solander on James Cook's voyages of exploration, including from the Endeavour's landfalls in New Zealand. Painter Bill Sutton donated funds to the Macmillan Brown Library at the University of Canterbury to purchase the set of prints, one of only 100 in the world: the university has a short article about the collection here. (The festival publicity about the show suggests that it's the first time they've been publicly exhibited in Christchurch, but that's rot: I saw them in the 80s. Won't stop me going along to see them again, though.)

I very rarely make impulse buys from the supermarket, but when I saw these vegetable chips the other day, I had to have them. In a triumph of the copywriter's art, the manufacturers note: "We have drawn inspiration from Sir Joe and his insatiable appetite for adventure to develop our range of incredible taste experiences." Excellent stuff. Perhaps the Museum could snap up a caseload for the gallery shop. 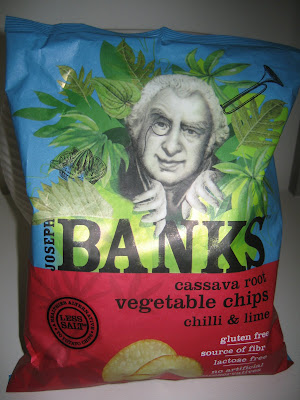 Posted by Cheryl Bernstein at 10:40 AM