"New York is cold but I like where I'm living"

Back on the air after a few days away: celebrating the baby's first year with a solo trip to Wellington, where I saw Leonard Cohen play at the Events Centre on the waterfront. It's become a cliche in the reviews I've read, but it really was the best concert I've ever been to.

From the moment he skipped on to the stage, a lithe figure in an immaculately cut dark suit and homburg hat, and launched into Dance me to the End of Love, he had me -- and the other four and a half thousand people waiting breathless in the dark -- in the palm of his hand. The voice -- rich and mellow with a touch of gravel -- was better than any recording by him I've ever heard. At 74, he sounds better than he did twenty-five years ago. Apparently he's touring in order to replace his lost pension fund: since retiring from the live music scene he's been studying Zen Buddhism, and has become an ordained Buddhist monk.

At one point he said: "It's fifteen years since I got up on stage, just a kid of 60 with a crazy dream."

The concert was full of similar deadpan one-liners, delivered with the sort of portentous and seemingly sincere yet ultimately self-deprecating manner I always associate with artist Max Gimblett. (Must be the Jewish/Buddhist cultural mash-up.) For The Tower of Song, Cohen started up the farfisa organ: "Don't be alarmed friends, it plays by itself. It's fairly sophisticated and you may not have seen one before."

He kicked off by apologising for the "handrail crisis" that had placed a visual barrier in the way of the premium seating: "I suggested to the management that they take it off but they thought that due to the nature of my work people would be throwing themselves off." Later on he remarked on the media reports which had described him as being of "diminutive stature", suggesting that at times he was actually invisible to the naked eye and while he'd been in Wellington he'd been offered a job by Te Papa as the "colossal shrimp". Less the godfather of gloom and more the wizard of wisecracks, at every turn the cheerfulness kept breaking through the poet laureate of pessimism's dark and complex act. 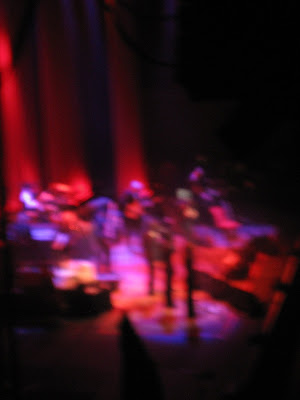 I'm quite simply desperate for a live album to come out from the world tour: not till the end of the year, apparently. The musical arrangements of songs I've known by heart for twenty years were extraordinary. The large band backing Leonard Cohen included a virtuosi Spanish guitarist from Barcelona and the Irish Webb sisters on "vocals and acrobatics". I wouldn't have thought that the perfection of songs like So Long, Marianne, or Who by Fire could be improved upon, but it could, and was.

Cohen frequently sang down on one knee on the gloriously kitsch Persian carpets which lined the stage, assuming a position somewhere between Frank Sinatra's "fleet's in!" 1940s hoofing style and Elvis's karate-derived vibrating leg. We were sitting upstairs, down the left-hand side of the auditorium, on about the same level as the band: we dismissed afterwards the idea that he was doing so in order to read the words off a song sheet, thinking instead that kneeling was a way to mitigate the stress of standing for almost the three-hour duration of the concert. (It seemed to take ten minutes to go by, of course.)

Silver-haired though he is, I got the sense that almost every woman there was utterly captivated by his presence. (He's a famous ladies' man who once announced that he “had a great appetite for the company of women.”) Dozens of women of all ages moved down the front for the second half of the concert, blocking the aisles and lining the stage. When during Chelsea Hotel Leonard Cohen sang "You told me again you prefer handsome men/ But for me you'd make an exception", I thought they'd rush the stage.

"The visits of the famous are always connected with our anxieties," writes Damien Wilkins in his When Famous People Come to Town. But when, after making a few jokes about Wellington's wind ("You don't even seem to notice it!"), Leonard Cohen said "You're lucky to live in a place like this", I thought that he's right. It's quiet down here at the end of the world, and sometimes I worry that it's a bit dull, but you can live a good life. But it's a life made much richer by the occasional visits of our cultural heroes.
Posted by Cheryl Bernstein at 12:24 PM