Large crowds are expected today to pack in to the loading dock at Auckland Museum, where an autopsy of a great white shark is due to start about now. (Actually I should say public necropsy, rather than autopsy -- apparently that's what it's called when the body on the slab is that of an animal, rather than human, as the Auckland Museum's press release helpfully points out.)

Speaking as someone who had to make a hasty exit from the fourth form science lab during the bullock's eye dissection class, I won't be watching the delayed video broadcast, available here at 2pm today NZ time. But I'd guess that lots of people round the world will be: the story's been picked up by the Times Online.

"Unlike the famous scene in the shark horror film Jaws where Richard Dreyfuss cuts open a menacing great white to discover a car licence plate and a crushed tin, the NZ scientists hope to find objects of the (previously) living marine variety.

“We’re interested in the gut content to see what the shark has eaten – it could be anything from seals, penguins, fish or even whale blubber,” Dr Trnski [marine curator at Auckland Museum] said, adding that the female’s reproductive organs will also be investigated.

“We’re certainly hoping not to find any human bits inside, but you never know.”"

Hmmm... a few interesting things going on here. Dismissing the possibility suggested by the Times's piece that the scientists are expecting to find human bits inside the shark's reproductive organs (a new twist on an old theme), I'm interested to note:

1. Public dissections as the latest installment in the ongoing one-upmanship contest between Te Papa and Auckland Museum: See your stinky old collossal squid and raise you the ultimate predator of the deep ... read 'em and weep.

2. The seemingly endless public taste for death and the visual mysteries of the dead body. Manifest in our time with the ubiquitous CSI TV franchise and the extraordinary popularity of autopsy fiction by Patricia Cornwell and Kathy Reichs (as well of course in grim splatter death-fests like the very nasty Saw movies), a taste for the ghoulish seems to be present back as far as you like in human history, from gladiators being torn apart by lions in front of cheering crowds in the Roman Colliseum to the system of public executions which only ended in Britain in 1868, commonly drawing enormous revelling hordes. 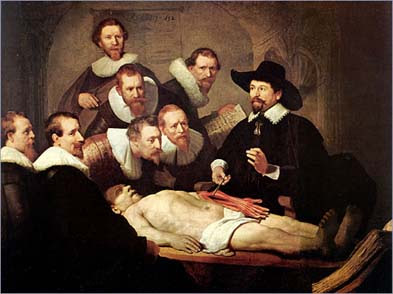 Perhaps the most well-known art-historical representation of this public taste for visceral horror is Rembrandt's The Anatomy Lesson of Dr. Nicolaes Tulp (1632), where the body of a recently-executed criminal is dissected under the gaze of a number of interested spectators who have paid an entrance fee to be present (and a fee to the artist in order to have their presence in the theatre of death recorded for posterity). I like to think the man at the front looking slightly nervously away from the body and out towards the viewer has had second thoughts and is about to make a bolt for it, much as I did from the science lab.

3. A growing sense that with stunts like these, museums are outstripping galleries at gauging the contemporary public taste for spectacle. Call it research if you like (and no doubt the dissection of the shark is a useful thing to do, I don't mean at all to be snarky), but putting it out in the public arena renders it a social event at the same time, much like surgical operations in the 17th century Netherlands. Of course autopsies and dead sharks are a specialised area of art practice that Damien Hirst has made all his own, but given the costs of international freight we're vastly unlikely to see any of these works in New Zealand's public art galleries. If gore fests / dead monsters / 70s paranoia films are to your taste, better nip down to the Auckland Museum's loading bay for a gander at the real thing.
Posted by Cheryl Bernstein at 9:24 AM

"Public dissections as the latest installment in the ongoing one-upmanship contest between Te Papa and Auckland Museum" I hadn't thought of that but you're right, I just remembered the squid cut up.

I think you're onto something too re: museums and art galleries... there's certainly something competitive going on. I've noticed an explosion of museums using Twitter and other social media tools... far ahead of dealer galleries such as White Cube or Gagosian. (A list of museums on Twitter can be found here http://twittgroups.com/twitstamps/museums)

I was hoping to get to the necropsy but I ran out of time. I did watch the video and was disgusted by the tapeworms in the shark's stomach, and that the dissector wasn't even wearing gloves!

The shark necropsy sounded truly foul from all reports, and perhaps disappointingly for both the museum & the audience, there were no human bits to be found at all. Pity. Would have made the news wires around the world ...

While public art galleries in NZ do seem oddly reluctant to take up the new communication opportunities of the internet (an honourable mention here to the Auckland Art Gallery staff's Outpost blog), the public museums here aren't much better. Apart from when there are dead marine monsters involved, of course...

Even though their missions are quite different, public museums and galleries have always been competitive in this country. In my experience the workers in them frequently regard the other camp with some disdain, as either black-wearing elitists with high opinions of themselves or roman-sandalled beardies who bring their own wholemeal sandwiches to conferences. But I think that right now, museums are in the process of reinventing themselves digitally more quickly than are galleries. Interesting to see if the trend continues.

The art world is certainly highly competitive but I had not given much thought to a competition between art galleries and museums. Since starting to think about this, I've noticed and also started to have 'conversations' with some museums, notably @gettymuseum. I was thinking about how nice it is to be able to connect with someone working in one of the big museums in the world so instantly, and to get information about the museum / exhibitions so directly.

Yes I've noticed AAG's blog, and also noticed Te Papa and AAG on MySpace about a year ago I think. I haven't seen them on Twitter however.

I think museums and art galleries can use social / digital media and infrastructures quite effectively, not least as an extension of their present outreach, archiving and education functions. You're right I think, that museums are reinventing themselves rapidly right now... in the case of NZ museums, sadly as you observe the trend has been for spectacles such as shark and squid cutups when it comes to engaging with the internet.