"Destruction of a modernist legacy" 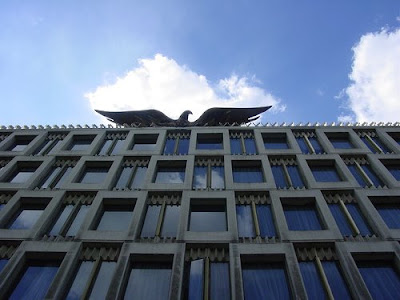 Photo of Eeno Saarinen's US Embassy Building in London from CultureMonster

Plans to construct a new home in a safer location in South London for the US Embassy have given rise to concerns over the fate of the current US Chancellory building in Grosvenor Square, a modernist masterpiece by the US architect Eero Saarinen. Completed in 1960, the building does not currently have heritage listing status and so is highly vulnerable to aggressive remodelling or demolition.

Architectural writer Hugh Pearman notes that while the US Embassy building is perhaps "too aloof" to inspire the affections of the public, it:

"is now championed by historians of the 20th century, and rightly so. Curiously, its busy, joggled fenestration -- so at odds with the clean, corporate lines of the dominant "International Style" that Saarinen rejected -- is very much the kind of thing that today's younger architects are doing, if with a lighter touch."

"Like it or loathe it," he goes on to say, "this building has enormous character, the expression of a subtle architectural intelligence. I know this: If we lose it, we will come to regret it."

I'm feeling much the same about the plans recently announced to demolish the existing Christchurch Airport Terminal (ironically completed in the same year as Saarinen's US Chancellery building in Grosvenor Square), designed by preeminent Christchurch mid-century modernist architect Paul Pascoe and awarded a gold medal in 1960 by the NZ Institute of Architects. I love the sense of the glamour, sophistication and fun the building still exudes, a pavilion constructed in the golden travel age of swinging trolley-dollies and handsome lantern-jawed pilots. Of course it needs redevelopment and expansion to accommodate hugely increased passenger and freight schedules (the international terminal by excellent and under-sung local architects Sheppard and Rout was, as the Canterbury Heritage blog rightly notes, a sensitive addition a few years ago), but to simply raize Pascoe's building to dust reveals a woeful lack of both imagination and sensitivity to the region's architectural heritage. An expat architect is describing it as the "destruction of a modernist legacy", over at Canterbury Heritage. 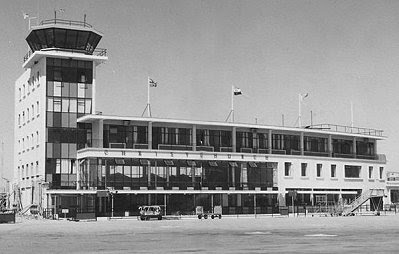 Not for the first time, I think work urgently needs to be done at a national level to preserve New Zealand's architectural heritage. The current system of ad-hoc heritage listing arrangements between local authorities and the Historic Places Trust is manifestly inadequate. Developers have already dealt to New Zealand's Victorian and Edwardian buildings, wherever they've been able: now it's the turn of our mid-century modernist architecture to be in the sights of the wrecking ball. I'm not advocating keeping everything, of course: just the good stuff, as judged by architectural critics who know their subject.

The developments at Christchurch Airport are being promoted under the PR rubric "Change is Good". But when it comes to knocking down one of the largest modernist commercial buildings in the region without a second thought, I simply can't agree with them.

From the airport's website, here's an artist's impression of the new building (by Sydney-based Hassall, working in conjuction with local firm Warren and Mahoney) which will replace Pascoe's terminal by 2010, and which, to my untutored eye, bears a surely unintended resemblance to the Millennium Falcon. (Though actually perhaps not, as that's almost enough to make me like it. And judging by the renditions, I don't, at all.) 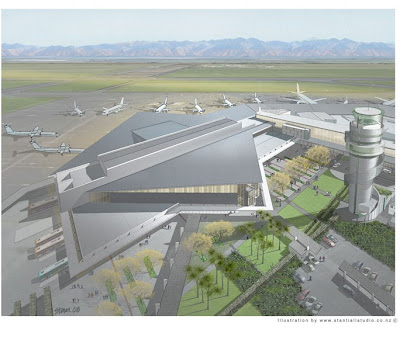 Posted by Cheryl Bernstein at 9:15 AM

Hi Cheryl, rather than the clunky old Millennium Falcon making its home in Christchurch, I fear the new airport looks like a stealth bomber which has snuck in to the landscape unnoticed.

Ah, the stealth bomber - an ominous addition to any landscape.

There is the international DOCOMOMO organisation, which is primarily concerned with listing and conserving modernist structures. There is a local chapter, coordinated by Julia Gatley, who is behind the Long Live the Modern book and exhibition soon to be touring.