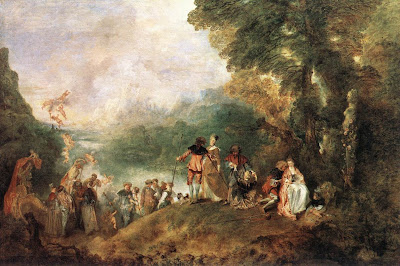 As I've mentioned before, I fundamentally disagree with the notion -- perhaps I should say the ludicrously anachronistic Calvinistic belief -- that lean economic times make for the production of better art. It's essentially a childish, old-fashioned romantic idea which presupposes that the best art is made by a hungry lone wolf of an artist emoting all over the show in his garret before going out to sell another pint of blood to pay for more oil paints. By contrast, too much money washing around the artworld leads inevitably to fat, bloated art and artists pandering to those tasteless overlords, the private collectors. What utter rot.

It's amazing how ubiquitous it is as an idea, though. Here's a couple of choice recent quotes on the subject.

"What is absolutely certain is that this recession has come in the nick of time, and that we should welcome it with open arms. The art world has spent a decade and a half metamorphosing into something ugly and worthless. That process has been halted. There is hope."
[...]
"...the whole tottering art-world edifice has grown soft, blubbery, arrogant, self-congratulatory and decadent. I cannot remember the last time I encountered an artist with the kind of fire in their belly that made Damien Hirst so unmissable when he emerged. Or anyone boasting the passions of the early Tracey Emin. British art needs a recession for the same sorts of reasons that those forests in South Africa need the occasional fire: to strengthen their wood, to return to an essence, to get rid of the weeds and to regenerate."
[...]
"So, roll on the recession. It’s all good news. A leaner, meaner, angrier art world that has to fight harder for our attention is exactly what we need."
-- Waldemar Januszczak in The Sunday Times, 11 January 2009

And it seems that design isn't immune either from this rather nasty sense of glee in the face of other's adversity, as well as an oddly moral conviction that poverty should be the hand-maiden of creativity:

"The pain of layoffs notwithstanding, the design world could stand to come down a notch or two — and might actually find a new sense of relevance in the process. That was the case during the Great Depression, when an early wave of modernism flourished in the United States, partly because it efficiently addressed the middle-class need for a pared-down life without servants and other Victorian trappings... Design tends to thrive in hard times. In the scarcity of the 1940s, Charles and Ray Eames produced furniture and other products of enduring appeal from cheap materials like plastic, resin and plywood, and Italian design flowered in the aftermath of World War II."
-- Michael Cannell in the New York Times

Hmmm. Can't see anything wrong with artists and designers making a decent living from their work, myself.
Posted by Cheryl Bernstein at 12:41 PM

Email ThisBlogThis!Share to TwitterShare to FacebookShare to Pinterest
Labels: art and money, design

"I fundamentally disagree with the notion -- perhaps I should say the ludicrously anachronistic Calvinistic belief -- that lean economic times make for the production of better art".

So do I. I also disagree with the other great myth that suffering (and even mental illness) makes for better art.