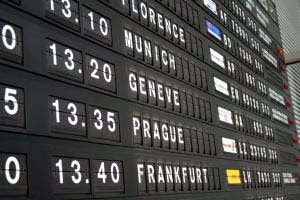 A couple of international items related -- at least tangentially -- to New Zealand art, which have popped up in my feed reader overnight.

The title of the exhibition is taken from the partnership arrangements made by commercial airlines to share passengers on a single flight in order to maximise profits. As the press release notes, this isn't to everyone's taste:

"Often travellers book a flight upon one airline and arrive at the gate to find that the plane and its staff is wearing the livery of a different partner airline – and serving food and drink associated with another national culture when we were looking forward to a specific set of flavours or the taste of 'home’! This might come as a pleasant surprise for the adventurous traveller but disappoint that flyer wanting to relax to familiar sounds and flavours two hours ahead of touching down. "

Rees relates the airlines' practice of code-sharing -- dominated by the major carriers -- to the backroom arrangements which have grown up around biennales, whereby the movements of global art audiences and artists' circuits are sewn up by the big players and where there is a definite worldwide hierarchy of events based on "colonial and capitalist" order.

All this is pretty interesting, but what I particularly like about Rees's concept is his desire to have a bob both ways (he describes it as "double agency"). While the artists in his show have been selected following their appearances in many of the top-end global biennales (the Whitney, Istanbul, Sydney, etc.), their work is concerned with "processes of cultural and socio-political displacement and alienation". Effectively, turning one of the usual biennale platforms on its head, the works are being produced "in denial of [national] representativeness."

No idea what the show will look like (maybe they'll put photos on their website in due course?) -- but I like the nature of the thinking behind it, very much. I was also interested to see that one of the contributing artists (down as coming from Malaysia/Indonesia; kind of ironic they'd include the artists' nationalities in the list of contributors) is Nadiah Bamadhaj, who went to art school at the University of Canterbury in Christchurch, and whose work I last saw in a group sculpture show at the old CSA Gallery in the early 90s.

The second item that's caught my eye overnight is news of the death of Coosje van Bruggen, Claes Oldenburg's artistic collaborator and wife. Time's Richard Lacayo has a nice short piece about their large-scale sculptural collaborations here. A sculpture by Van Bruggen and Oldenburg at Donald Judd's Chinati Foundation in Marfa, Texas, was the inspiration for one of my favourite works by NZ photographer Marie Shannon. In this series, Shannon rephotographed drawings made by her then 4 1/2 year old son of works the family saw at Marfa, including Oldenburg and Van Bruggen's Monument to the Last Horse. 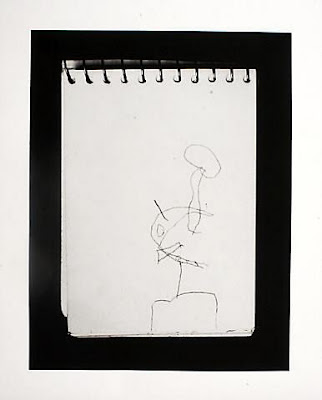 And here's Oldenburg and Van Bruggen's original, in Texas, marking the grave of a cavalry horse named Louie. (An essay about the work by Donald Judd can be read here.) 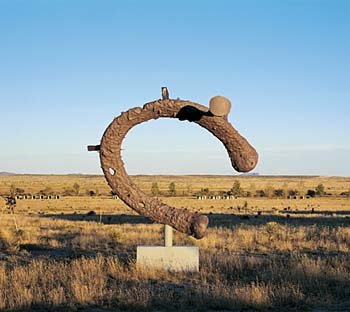 Posted by Cheryl Bernstein at 9:28 AM