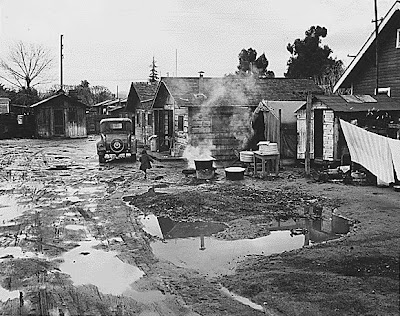 I've heard him say similar things before, and my impulse was then, as now, to strongly disagree with him. I refuse to countenance the idea that hardship is a virtue (blame it on a devoutly atheist upbringing). The notion of the artist as financial outsider belongs back in the gloomy garret, along with the palette knife and the severed ear. I think it's a great thing that the New Zealand art market has grown to a point where it's possible for some of this country's most prominent artists to make a decent living from their work: it's not something that happened for artists of McCahon's generation, the prices of whose work rose sharply only after their deaths. In my observation, it's not the case that strong sales of artwork automatically equate to an artist who's sold out artistically. And perhaps most critically, I just don't believe the inevitable corollary of Amery's argument, that times of plenty produce worse art than lean times do (though I'll accept there's more of a market for rubbish of any sort when economic indicators are good).

Most successful artists of my acquaintance are completely aware of the dangerous seduction of their market, and the balancing act required to simultaneously feed it while keeping one's distance from it. If you want to make a living as an artist, you need to make saleable works; but if you want to make really good work and achieve critical acclaim and industry recognition, you need to experiment and take risks. (Pull both off at once, however, and you're made.) It's a dangerous game, and the most successful artists understand on which side of the fence they need to stay. Damien Hirst -- whose overall subject is arguably the art market itself -- puts it best, in the apocryphal remark originally attributed to his manager, Frank Dunphy: "Money should chase art. If art starts chasing money, the whole thing is fucked."

In my experience, financial hardship is not in the slightest conducive to creativity. The opposite, in fact. If you're worried about paying bills, or eating, or keeping warm, the last thing on your mind is making art. At that point you're interested in making money. Boredom, on the other hand, is what's always driven me to do anything new, and it tends to surface more readily in times of plenty.

The current straightened economic times, however, will undoubtedly reshape the artworld in various ways, as collectors tighten their belts and sponsors pull back on their commitments. Jerry Saltz, reporting recently on the impact of financial troubles on London's Frieze art fair, made the following predictions:

"If the art economy is as bad as it looks—if worse comes to worst—40 to 50 New York galleries will close. Around the same number of European galleries will, too. An art magazine will cease publishing. A major fair will call it quits—possibly the Armory Show, because so many dealers hate the conditions on the piers, or maybe Art Basel Miami Beach, because although it’s fun, it’s also ridiculous. Museums will cancel shows because they can’t raise funds. Art advisers will be out of work. Alternative spaces will become more important for shaping the discourse, although they’ll have a hard time making ends meet."

Most importantly, suggests Saltz, money will stop being the only measure of success in the artworld. This seems like quite a good thing, athough maybe more relevant to parts of the world with larger markets for art than New Zealand's. But while the recession might clear out some of the deadwood from the edges of the art market (as well as from other sectors), I would doubt that it will be the catalyst for the production of noticeably better art than in the good times.
Posted by Cheryl Bernstein at 2:30 PM

In my experience, financial hardship is not in the slightest conducive to creativity.

I agree... its incredible how pervasive the myth of the starving artist slumming it for inspiration persists.

Re: Hirst - I rather think his art chases money... and perhaps he's right that in that case the whole thing is fucked... a great many of his works are in constant need of repair, retouching, reassembling...