Some years ago, I hired a signwriter for a friend who was coming from out of town to make an art installation. My friend said that he wanted an old-school hand-done sign, painted directly on to the wall. When I rang the sign company and explained what I wanted, there was a slight pause.

"You know that we can do anything you want in vinyl?" said the voice at the other end. "Computer cut. You just send us a file of what you want, and we can just print it out. Put it straight up. It'll look perfect. It's how signs are done now."

It was the early 1990s. Designers had recently moved to Macs from paste-up work, jettisoning scalpels and erasers and tins of bull-gum. Typesetters were going out of business and bromide cameras were being relegated to the back room, relics of an old technology for which there was no further requirement. Like hand-painted signwriting, the physical craft of graphic design now seemed ridiculously old-fashioned. You no longer needed a steady hand, just computer skills and -- perhaps secondarily -- a good eye for the page.

I explained that actually I was after a hand-done look for this sign, wonky bits and all. "It's for an art show," I added.

Unsurprisingly, the man the company sent to do the work was getting on a bit. He was greying, and gruff, and balding, and his stomach overhung his trousers, and his nose was a deep crimson. He looked at my friend and I with a kind of sardonic amusement. But when he broke out the brushes, he was an artist. Steadying his arm with a mahl stick, he painted the few words my friend wanted on the wall, in freehand. I stood there and simply stared. I was astounded at the skill, and the speed, and precision, and was utterly charmed by the great beauty of the lettering. It was my own "hairdesser and tobacconist" moment, although rather than being the formative moment in a subsequent career as a painter, it inculcated in me simply a lasting passion for hand-painted lettering. 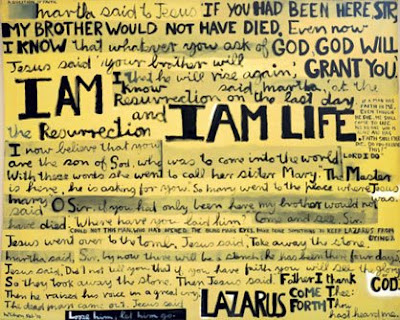 (McCahon, on the other hand, famously wrote in 1966 of his point of origin as an artist:

"Once when I was quite young… the hairdresser had his window painted with HAIRDRESSER and TOBACCONIST. Painted in gold and black on a stippled red round, the lettering large and bold, with shadows, and a feeling of being projected right through the glass and across the pavement. I watched the work being done, and fell in love with signwriting. The grace of the lettering as it arched across the window in gleaming gold, suspended on its dull red field but leaping free from its own black shadow pointed to a new and magnificent world of painting. I watched from outside as the artist working inside slowly separated himself from me (and light from dark) to make his new creation. ")

The typeface my friend had chosen for his installation signage was called Dom Casual. He'd selected it, I think, purely on the basis of its visual qualities -- retro, friendly-looking, with its vertical strokes ending at different heights so it had a slightly painterly, hand-done effect even when reproduced in the font book. But when an acquaintance of his told him that Dom Casual was known as the "people's typeface", he liked it even more.

This was all before the internet, of course, back when it was a lot more difficult to find out more about interesting things that come your way. So that's where my knowledge of Dom Casual began and ended, until the other day when I came across a publication which used the typeface, and I remembered the moment in the gallery as my friend was putting his show together and the signwriter held us captivated as the lettering unfolded across the wall, and I felt that it would be a good time to know more.

Dom Casual was designed in America in the late 1940s by Peter Dombrezian, I've discovered, and it seems to be the only font he published. It was originally called Dom Twixt, and was hand-drawn for photo-typesetting. There were a whopping 213 characters in Dom Twixt, allowing the graphic designer to produce many possible versions for headlines and advertisements; but when in 1951 the American Type Foundry converted it to metal type and renamed it Dom Casual, there were only 52 characters converted, making it much less flexible in its applications. Pete Downer writes that Dom Casual:

"was a rare case in which a type design was adapted to an older technology instead of a new one. While thousands of metal typeface designs were copied to film for photo-typesetting, very few faces originally designed for filmsetting were subsequently cast in metal."

Dom Casual was used by Warner Brothers for its cartoon credits from 1960, and has also featured in the titles for Bewitched (and surprisingly, Neighbours). With its handbrushed, informal look, it remains the archetypal 'cartoon' font -- but as French notes, it's ironic that a typeface cast in metal should be so widely regarded as a textbook example of casual brush lettering. 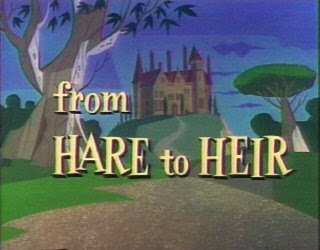 
I think that what I like about this story is that by hand-painting it on the gallery wall, my friend's signwriter effectively converted the typeface back again to its own point of origin. I'm sure he knew what he was doing, though it's taken me 16 or so years to find out.
Posted by Cheryl Bernstein at 9:16 AM