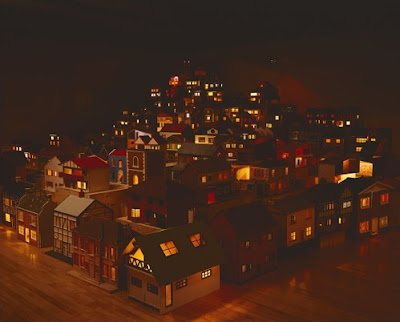 Like many other British artists of her generation included in the big touring show 'Pictura Britannica', which came to Wellington in 1998, the impact of Rachel Whiteread's work in New Zealand was diminished by the howling public furore which blew up over the inclusion of Tania Kovats's tiny conceptual sculpture, Virgin in a Condom. Originally scheduled to be shown at City Gallery Wellington, a leaky roof sent the exhibition across the road to the big house: a gift-horse whose mouth, in retrospect, Te Papa's decision-makers may have wished to have examined more closely, given the extent of the protests which ensued.

From memory (I don't have the catalogue of the show, and may well be making this up), Rachel Whiteread's work in 'Pictura Britannica' was a concrete cast of the negative spaces under bench seating. The work was related to her extraordinary cast of the interior of an entire house at the end of a 19th century tenement row in East London, House, which she made in the summer of 1993; a gargantuan project which left her both physically and mentally exhausted, as well as dealing with the challenges of having suddenly become a public figure.

Although I never saw the work (the old house had originally been scheduled for demolition; the same fate met Whiteread's House in 1994), I've always been fascinated by photographs of it; its strange looming bulk, the mismatched fireplaces projecting from the inside-out skin of the house, the blankness of its aspect. It was the kind of house in which both sets of my grandparents lived, in north and east London: ubiquitous in Britain, yet impossibly exotic in New Zealand, in a slightly jokey old-fashioned working-class British sort of a way, like jellied eels and pearly Kings and knotted hankies on the head. Giving solid form to an empty space which was once lived in, Whiteread's sculptural memory of a house is now only a memory itself, and has become conflated in mine with the small dark rooms of those London houses I visited in my childhood. 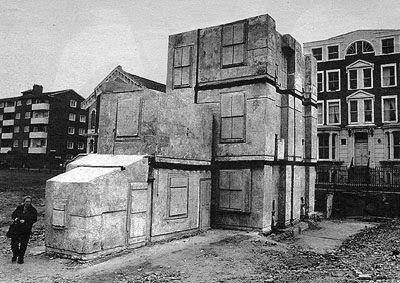 A "small, somewhat fitful show" of Whiteread's work has just opened at the Boston Museum of Fine Arts. The centrepiece of the exhibition is a new work, a nocturnal townscape of dolls-houses, which the artist has collected for more than twenty years (pictured at top above):

"I think the thread that connects it with all the earlier work is that if you look inside these houses none of them have people in them, there's no furniture. They just have electricity - I was interested in the interiors of these houses and also the fact that they had been through many generations of family. They may have been made by the father. There was a lot of love involved with them and then eventually the love was lost. They were transferred through generations. That transaction is always something that's been in my work. The things that I've used have been second hand."

Time magazine's Richard Lacayo has a terrific short interview with Whiteread here, following the opening of her show in Boston, in which, among other things, she discusses her first meeting with Louise Bourgeois:

"Many years after college, just after I had made House, Louise was at home ironing the New York Times, which it was her habit to do every morning. And there was a picture in the paper that day of House. She saw it and said to somebody: "I want this woman in my house. I want her to come to my house." So I was summoned to see her."

Not for the first time, I've been wishing this morning that a New Zealand art museum would give Rachel Whiteread a call. Get her over to do a show in one of our houses. Or preferably, a survey show AND a new project.
Posted by Cheryl Bernstein at 10:05 AM