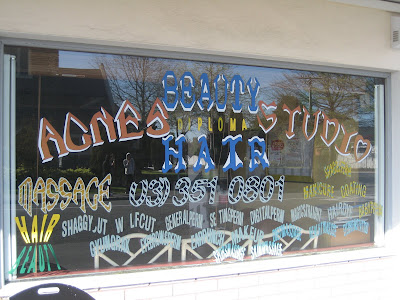 I see it most days. Usually I'm driving past, on my way back from the university or the library or the supermarket; and I'm hurrying, trying to get home to cook dinner or take the washing in before the rain comes; and maybe the small guy's chatting in the back, and the baby's grumbling, and The House at Pooh Corner's on the CD player yet again, and school kids are biking three abreast up the road, and my mobile's ringing -- in short I am distracted -- and I see it, and I'm momentarily astounded, and I think that one day I really must stop and have a proper look, but I never do.

It's a shop window, the middle one of an unremarkable block of three shops, deep in suburbia. The shop on the corner is a dairy, one of those dark, maze-like ones with an uneven floor and a blue fly-killer hanging up and only one of each product on the shelves at a time (this is a city where everyone drives; dairies do their best business elsewhere, where people walk to and from work); the shop on the other side is the headquarters of an upmarket personal trainer. There's an irony to this, of course.

I think what first attracted me to the shop window in between was the arch of its main lettering -- an old-fashioned commercial art device like that used in the 'Hairdresser and Tobacconist' lettering which famously inspired the young Colin McCahon to become an artist -- followed by its sheer volume of information which is nonetheless utterly unintelligible to a passer-by. The font is a wrong-un: crazed-looking, slightly volcanic, wonky, like a home-made tattoo which has bled into the skin. It looks like something from Tony de Lautour's blue period. Each time I pass it, it snags at the edge of my consciousness. Until I walked there in the weekend to photograph it, I had no idea what the business actually was. An accountant? A lawnmower repair shop? Ethnic foods?

Now I've photographed the window -- an exercise which has tamed something of its visual craziness -- I realise that it advertises the premises of a hairdresser and beauticians, albeit of an unusual variety which offers "Wolfcuts" along with "Eyebrowsperm" (very tempting to re-punctuate that one) and "Eyebrowstattoo". (Don't fancy an "Earpunch" much though.)

There's something wonderful about walking where you usually drive. I am slowly becoming a flaneur of suburbia, measuring small journeys round our neighbourhood by effort and distance rather than duration. I'm seeing things I've never noticed: strange graffiti, mysterious signs, a letterbox shaped like the head of a robot. 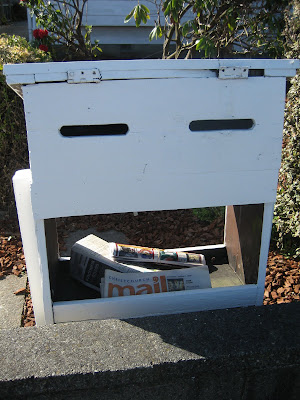 Yet there's a mystery to car journeys absent from the footpath. On the one hand, there is the microscopic detail of the street level view, with its possibilities of human interaction; on the other, there's the passing glance from the car window, at a scene intuited but not properly apprehended. As a walker, you are a participant; you can stop, and look around, and take it in. You're immersed in your surroundings. In a car, you are a spectator, afforded only a single frame of the passing world; you have to imagine the rest.

Having stood outside with my camera I now know what I'm looking at when I pass the three shops: I can see (disappointingly) that the central word is in fact "HAIR" rather than "HATE"; I can see that the font is constructed from angular multiples of a heart, upside down on the ascent and right side up on the descent; I can see that "Diploma" is written in "serious" lettering in the middle of the mad word pile.

But what I'm wondering is whether all this newly-acquired knowledge of the sign's content will make me stop seeing the crazed beauty of the design when I flash past in the car. The attraction of the visually mysterious, one frame at a time.
Posted by Cheryl Bernstein at 7:16 PM