The other day, back in what I now rather fondly think of as the Phoney Spring, I was riding my bike along the track by the railway line when my attention was caught by a small yellow sign on the other side of the hurricane fencing.

I have a great liking for the old-fashioned hand-painted signwriting that is fast disappearing from the urban landscape, something I share with Jonty Valentine from The National Grid (his "Possibles and Probables" article on the score cards at Carlaw Park is the best design thing I've read for ages). It's the battle between the camera and the brush all over again, although this time the machines are winning: the original hand-done commercial artwork is disappearing under a slew of photographic reproductive processes. Each time I see a faded advertising sign painted directly on to the side of a building (there is a great one advertising "Leed" in Christchurch's Woolston which must have been there 40 years) I expect it to be the very last one.

Again I say it: New Zealand needs a design museum. Soon. Before all this stuff completely vanishes.

The sign I'm talking about is nothing too fancy. It's centred on a yellow drop box nailed to the side of the cabinet which controls the barrier arm at the railway crossing. It's a yellow board, about 20 centimetres square, with black lettering: it looks like something that might appear in the corner of a cut-up work by Rosalie Gascoigne. It's painted by hand, but in a machine-age style. I can't identify the font; it's all caps, sans serif, the ubiquitous plain, no-nonsense, get-the-message-across typeface used by the railway workshops for decades. Or at least it used to be: I wouldn't imagine that NZ Rail's current incarnation still includes painters' workshops in-house. The lettering reads simply GANGERS TEST. No apostrophe necessary.

What I find interesting about the sign is that it's clearly informational -- its yellow and black livery announces that it has something useful to say about this place -- but that its message is completely baffling. It looks like public information, but actually, it isn't: it's written in a private language presumably known only to railway workers. The yellow drop box obviously has a quite specific and useful function, and the sign indicates to whoever needs to know that here is the place where the Gangers Test happens. Whatever that is.

I'd quite like to know what it means, and so I idly toyed for a while with ringing up OnTrack and pretending to be a proper journalist writing a story about the state of the tracks or something, and slipping in a surreptitious question about the purpose of the Gangers Test Box. But on reflection that seemed like quite an effort to go to, with a lot of lies to tell in order to get to the truth, and perhaps these things are better left as everyday mysteries anyway. 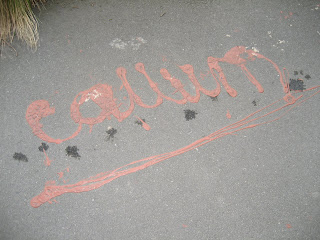 A bit further along the track are two rather more informal pieces of amateur graphic design: two large autographs by "Callum" and "Mark" written in bubblegum. These hand-done signs each measure just under a metre wide. They've been there for some years, permanent roadway signatures unmoved by bike tyres or passing feet, though someone recently has run a swathe of white paint through Mark's name. I particularly like the swirling flamboyance of "Callum", rendered in an upright cursive script like an elderly lady's shopping list.

I've never made lettering like this myself, but I would imagine it would take both an enormous amount of bubblegum and a concerted effort to chew one's way through enough product to make signs as big as these. Callum, it seems, had plenty to spare, finishing Mark's off as well as his own with a jaunty underline. 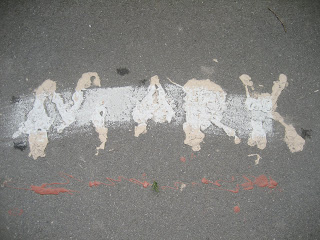