The end of the world as we know it 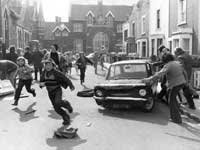 All the fuss and bother over what might potentially happen when they turn the key in the ignition of the Large Hadron Collider this evening (sucked into a black hole! time flowing backwards! a jolly loud bang!) has reminded me of the classic techno-panic children's TV series of the mid-1970s, The Changes.

It ran for 10 very scarey episodes: the basic premise was that electric pylons throughout the country suddenly started emitting a high-pitched noise which drove people to destroy all technology and riot in the streets. Fridges, cars, toasters, alarm clocks, and perhaps most oddly -- soda streams -- all took a serious beating in the first episode. (The Hillman Imp in the image above is in the thick of it.) 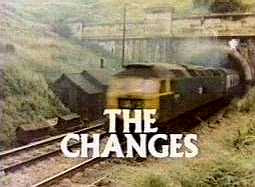 After witnessing her father smash up the family's TV set in a mad frenzy, the heroine (12 years old in the show; a diminutive 18 in reality) became separated from her parents and had to travel through an unrecognisably feral England complete with menacing pitchforks and bad dentistry to get to France (where the pylons were probably still OK) to be reunited with them. Along the way she encountered a gang of robbers stealing children from the newly medievalised villages, and in a hideously frightening episode was tried as a witch. The only help she received along the way was from friendly Sikhs who appeared to be unaffected by the awful noise. (Unclear why this should be.)

The Changes has become somewhat confused in my memory with another equally terrifying programme that screened at around the same time -- a multi-part documentary in which a group of British people, including children, lived under Iron Age conditions for a year. (No underpants! No toilet paper! No sticker books!) It was probably the first reality show ever, but instead of the relative luxury of the Big Brother house, the poor "contestants" on Living with the Past (though their only prize was the blinking show finishing) were forced to live in a dreary encampment of freezing thatched roundhouses and to trudge through thick clayey mud to the primitive long drop dunnies (placed 500 yards or so away for fear of typhoid). My parents were alarmingly keen on self-sufficiency in the 70s, as well as camping, but I was extremely grateful they didn't volunteer our family for this TV horror.

The Changes ended with the heroine's discovery of an ancient lodestone that had been placed in a cavern by Merlin and which had somehow been activated and was calling the country back to a simpler time. Can't remember how, but she got it to stop; and a battalion of cars, which had stalled in a massive traffic jam, started again in an extraordinarily memorable -- if somewhat improbable -- shot as Britain returned to normal.

The Changes managed to cover several hitherto unrelated tropes of the 70s in Britain at once; civil disobedience, fear of technology, an interest in Arthurian legends, going back-to-nature, and smashing up TV sets (the latter popularised by prog rock bands in hotel rooms). As with a lot of TV I watched in the 70s, it was probably vastly unsuitable for the children for whom it was intended, and has produced a lifelong thoughtfulness around electric pylons.

I can't imagine that the world's going to end at 7pm tonight NZ time when they start up the Large Hadron Collider, but there's a slight air of risk contingent upon the whole venture which is both appealing and slightly alarming. (I suppose if they knew exactly what would happen then it wouldn't be an experiment. Would it.) Each generation, it seems, has its own Armageddon myths: so far in my lifetime we've encountered potential obliteration of our way of life by technological meltdown (the 70s), nuclear war (the 80s), and Y2K (2000). (Can't remember what it was in the 90s -- an asteroid crashing into the Earth? An enormous tidal wave sweeping the globe? Bruce Willis is bound to have made a movie about it, whatever it was. Or Michael Stevenson some art.) More recently our doomsday events have included Peak Oil, international terrorism, the possibility of a global pandemic like bird flu, and now it's a black hole sucking civilisation in after it. Probably.

See you tomorrow. I hope.

Posted by Cheryl Bernstein at 1:42 PM

Reminds me of 1970s British TV that fightened me - The Survivors and Quatermass. Maybe these things are why the LHC remains slightly scary even though rationally its not.