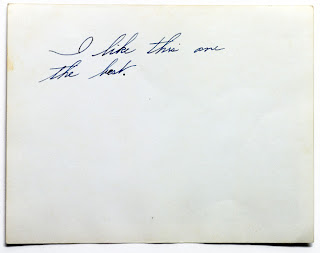 The back of Monroe’s favorite photograph of herself, which shows her standing in a jeep, taken by a soldier in Korea during her U.S.O. trip there. Photograph by Mark Anderson.


A large cache of personal effects belonging to Marilyn Monroe has been unearthed, and photographed by Mark Anderson in a project which took almost two years to complete. The contents of two filing cabinets, stuffed with receipts, letters, telegrams, fan mail and personal effects have been archived and documented by Anderson: 586 items are available to view here. 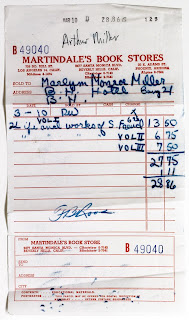 Receipt for The Works of Sigmund Freud, Photograph by Mark Anderson.

Frank Sinatra had originally suggested that Monroe keep her life in order by organising her papers and personal effects in two filing cabinets: one of these was sold at auction after her death, while the contents of both have in recent years been the matter of a legal dispute between the Monroe Estate and a relative of her former business manager. 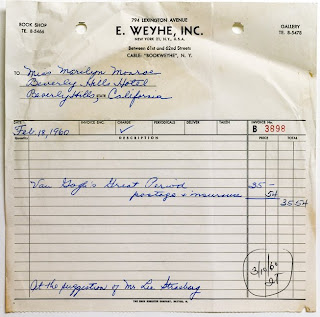 Through Anderson's viewfinder, photographs of receipts for groceries and medical procedures and gifts take on a quality somewhere between holy relics and crime scene documents. While the contents of the cabinets are clearly a biographer's treasure trove, what is most striking about the project is its almost Warholian sense of accumulated banality. There are hundreds of images of nothing very much at all: coat check tickets and cash register receipts and packing lists. The best of the photos are those which document a single item.

I'm struck, as ever, by the pathos of the found note; the impossibility of piecing together a life from scraps of paper left behind, like an archeologist trying to describe a vanished civilisation from a few broken pot shards. Accumulations of objects, lists of services paid for, correspondence entered into: the story is in the details, but the life is somewhere else entirely. Anderson's project is, in the final instance, more existential than revelatory.

Posted by Cheryl Bernstein at 1:37 PM