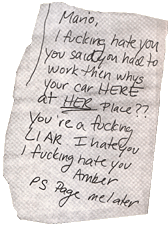 Thinking again about Stephen Shore's project of collecting and documenting ephemera from his road trip reminded me of the slightly more downmarket Found project. When an angry (but nonetheless hopeful) note meant for someone called Mario was left on his windscreen in Ann Arbor, Davy Rothbart (and his collaborator Jason Bitner) thought that other people might be interested to see it. On showing it to friends, they found that almost everyone had picked up a similar scrap from someone else's life at one time or another, and shared a similarly nosy fascination for found notes. So they started an annual magazine dedicated to the subject, and encouraged people to post their finds in, which they now do from all over the world: poetry on napkins, lost polaroids, bizarre shopping lists, diary entries, love notes written on homework paper.

There are a few New Zealand artists who've been interested in using this kind of material. In the early 1990s, Ronnie van Hout made embroideries on canvas, using handwritten texts taken from student noticeboards. This is his Untitled (Male Rock/Pop Singer) (1993) from the Chartwell Collection. 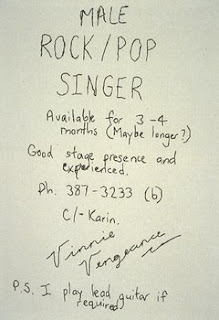 In 2005, Marie Shannon collected and photographed notes written by members of her family to one another. The prints are beautiful and reveal all the tiny crumples and creases of the notepaper. This is Sorry for being grumpy. 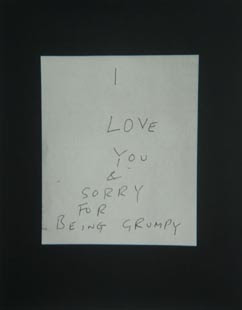 I have made a few bizarre street-level finds over the years. I found this note -- which is xeroxed, suggesting it must have been required on more than one occasion -- blowing down a residential street in central Wellington. 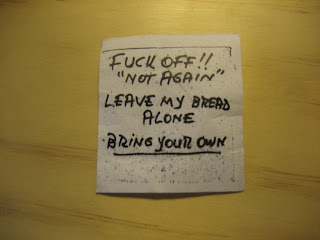 These vaguely threatening musings on the end of a relationship were tucked into a guest compendium of an Auckland hotel I stayed in a few years ago. 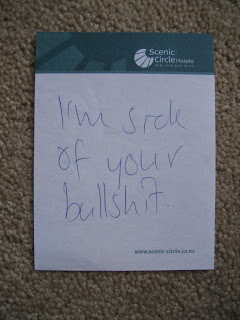 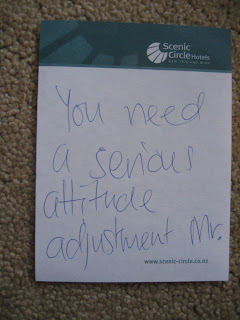 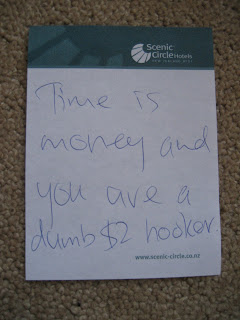 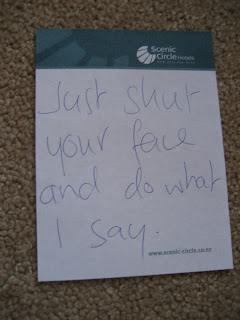 There's something about found texts that's so sad and futile and evocative, but like the note to 'Mario' above, hopeful somehow. New Zealand poet Jenny Bornholdt uses them from time to time. One of my favourites is this poem from her 2000 collection, These Days:

(Notice in our letterbox)

Have you lost a rabbit?
I have found a rabbit.
I found it on Waipapa Road.
I found it late on Monday night.
It was running all over the road.
It is white with brown spots.
Is it yours?
Phone Erik on 386 3641

Posted by Cheryl Bernstein at 12:16 PM