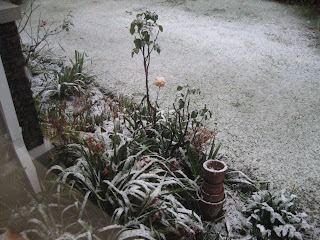 I fell asleep for a couple of hours on Saturday afternoon. When I woke up at dusk, a fall of snow had transformed the garden into a wonderland. Snow is a rare event here, and so we took some photographs; but as ever, none of the magic of that moment (the silence, the stillness, the strange feeling of connection to history through the natural world) was conveyed in the images.
Why is it that photographs of weather are always either banal or cheesy, yet the experience of snow, or a sunset, or storm clouds approaching, can be so intensely felt? It's not solely due to technical ineptitude on the part of the photographer: in fact, the more professionally produced a cheesy weather image is, the greater the cliche. I think the problem is something akin to hearing descriptions of other people's dreams, or their drug-induced visions, always recounted with a kind of starry-eyed, far away intensity. ("... and then the Beatles danced right off the page, and Paul caught my hand, and we all ran laughing into the ocean...") The sense of the radical transformation of the everyday world peculiar to dreams, or visions, or to extreme weather, is lost in translation. It is essentially uninteresting, unless you were there.
So it is an extraordinarily clever artist who makes something interesting out of atmospheric conditions as a subject. Among New Zealand artists, Bill Culbert's photographs of the view at sunset from his house in the South of France spring to mind. They reveal the world in a process of daily transformation.
This is Dawn at Bill's house. 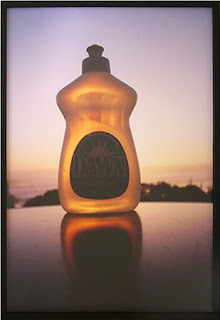 New Zealand artists have been going to Antarctica to look at the snow for a decade or so now, and when I hear there's someone else ready to board the Hercules, palette knife or Leica in hand, my heart sinks. I have to confess to being inherently disinterested in the Antarctic. (I wavered a little when I watched Marcus Lush's terrific Ice TV show, but that was probably more due to his gratuitous horseplay with the terrible static electricity that builds up on the nylon carpets at Scott Base.) Likewise I find it hard to care about under-the-sea volcanoes, Mt. Everest, or outer space, and if I heard that an artist was ready to set off to one of these places, I wouldn't be anticipating the result with much excitement.

Yet there has been some interesting work made in response to the ice, and every time I've seen it, I've been pleasantly surprised. There's Anne Noble's seminal Wilhelmina Bay, Antarctica (2005), which reveals the icy landscape as a photographic opportunity in the making. 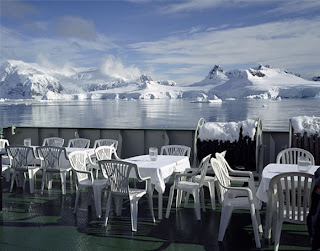 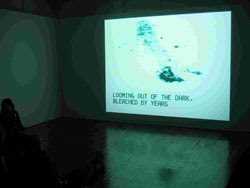 One of my favourite Antarctic images was made in Sydney. This is Gavin Hipkins's The Homely: Sydney (Hood) (2001). It speaks of the mystery and menace and blankness of the Antarctic, as well as the talismanic nature of objects which have returned from the ice. 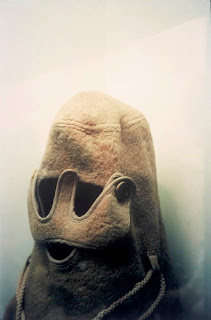 Ronnie van Hout's one of the 2007-8 Arts Fellows in Antarctica. And actually, I can't wait to see what he'll make of the experience. Maybe, as with all good art, what it really comes down to is the calibre of the artist rather than the specific nature of the environment they're in. There's no such thing as a good or a bad subject...

Posted by Cheryl Bernstein at 9:03 AM