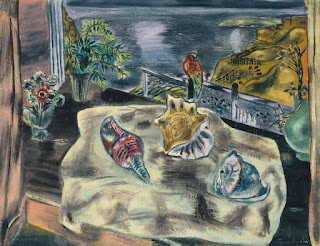 Frances Hodgkins, Wings over water, 1930, oil on canvas, Collection of the Tate Gallery

Like policemen, our international art reps are definitely getting younger. At 31, Francis Upritchard will be the youngest New Zealand artist to exhibit at the Venice Biennale so far. By contrast the first New Zealand-born artist to be selected for Venice, the other Frances [with an 'e'], Hodgkins, was a venerable 70 when she represented her adopted home, Great Britain, in 1940.
Horses for courses of course: in 1940, participation as a national representative in the Venice Biennale was more likely to be a kind of valedictory prize for a senior artist. Back then, "excellence" was synonymous with experience. Now the keywords are "pushing the envelope", innovation, and "fresh perspectives". Ever since Jacqueline Fraser described the VB as the "Olympics of the artworld" in a Creative New Zealand press release back in 2001 -- a meme which has been picked up by dozens of writers since -- we've been sending our international art representatives away young(ish) and fit, with a strong track record, ready to take on the world, etc.

Frances Hodgkins was in her early 60s when she painted Wings over water, a study of the view from her Cornish studio window with her landlady's parrot in the foreground. (A sketch for the work is in Te Papa's collection.) A decade later she included the painting in the selection she made for Venice with her dealer, A. J. McNeill Reid.

Not lacking perhaps in confidence, Hodgkins wrote to a friend in 1940:

"He [McNeill Reid] is very fussed over the Venice affair & what best to do and how not to spend more than necessary on frames etc. He told me that your picture was being re-varnished wh [sic] will do it a lot of good – It is good of you to spare it for so long I think that it will be the peach of the Show & with out any doubt win the prize for foreigners of 2500 lire."

Disappointingly, the outbreak of World War II meant that Hodgkins's paintings -- and those of the other British artists selected -- never actually made it to Venice. The Biennale in 1940 was unsurprisingly a somewhat political affair, dominated by Germany, her allies and neutrals. Britain withdrew from planned participation at a late stage and exhibited the works to local acclaim at London's Hertford House instead.

For time-poor readers, however, here's how the Brits do it: first they convene a selection panel of experts for Venice. Each person is asked to bring along the names of six artists for discussion. The committee locks itself in a room, this year at the Trafalgar Hotel, and each artist is discussed, though the names of the artists, and the details of the discussions, are not minuted. This year after 3 1/2 hours deliberation, the committee came out with a unanimous decision to invite Steve McQueen to represent Britain in Venice in 2009. 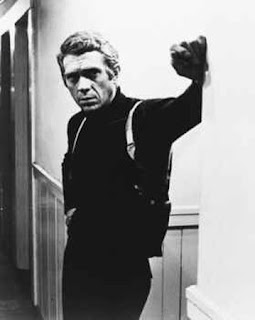 (Not the Steve McQueen who's going to Venice.)
Posted by Cheryl Bernstein at 9:46 AM