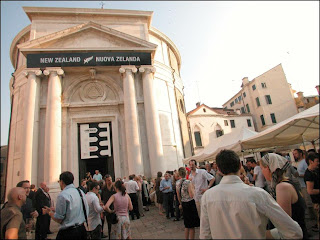 As the good people at Overthenet mentioned last week, it would seem that a large proportion of the cost of funding New Zealand's presence at the Venice Biennale lies not in the art, nor the artist, but in the venue -- finding it, securing it, preparing it to take an art exhibition, and renting it for the five month or so duration of the actual exhibition.

Unlike Australia, the United Kingdom and 32 other countries, New Zealand does not exhibit in a 'national pavilion' -- the permanent national exhibition spaces in the Giardini near the Arsenale, the heart of the Biennale. (Creative New Zealand notes that "the assignment of the permanent pavilions in the Giardini was largely dictated by the international politics of the 1930s and the Cold War." We weren't a big player then, as now.) Instead New Zealand has to find its own accommodations, and has accordingly exhibited in a different venue on each of the three 'official' occasions we've been to Venice thus far. So far our 'national pavilions' have included a disused church and a derelict orphanage.

I'm not sure where we'll be in 2009, or even if the venue has been secured yet. If it's been announced, I've missed it. I am sure, though, that competing against 40 or so other similarly homeless (but in many cases richer, and more wily) nations to secure a suitable and affordable space for New Zealand art anywhere north of Rome at Biennale time must be a nightmare. (It's no wonder that -- in the massive report commissioned by Creative New Zealand on whether it was worth participating or not -- some bright spark suggested mooring a boat near the Giardini and exhibiting on it. Not as stupid as it sounds. Maybe. Well, if it worked for Radio Hauraki in the 70s...)

Interesting, then, to read what the curator of the 2007 Venice Biennale, Robert Storr, had to say about the accommodation problem recently.

"Paying through the nose for a palazzo on the far side of town is not the answer for artists who are under-known nor is it the way for their countries to become visible participants in world culture. Even well-known artists suffer. The Argentine Pavilion was forced to leave its palazzo before the jury met last October, so that even an artist as prominent as Guillermo Kuitca missed a shot at a Golden Lion—and Argentina had been petitioning for a pavilion for years."

Instead Storr advocated a dramatic expansion in the number of national pavilions provided by the Biennale authorities in the Arsenale, "in order that as many countries as possible can take their place in a truly integrated international community of national pavilions."

Sounds great, but it's unlikely to happen in the short or even medium term, I suspect; nothing to do with Venice ever moves quickly (unless it's another country trampling over New Zealand for the good venues). The 2005 venue was better in style and location than the previous two, but it's anyone's guess where we'll call home in 2009.
Posted by Cheryl Bernstein at 7:45 AM