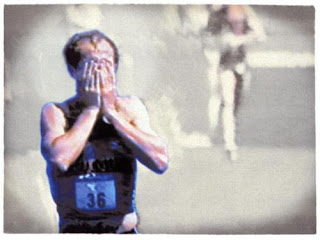 Tracey Moffat, Fourth #1, 2001, Roslyn Oxley9 Gallery. A truly fantastic work, and not the subject of a stiff review on eyeCONTACT.

Over at eyeCONTACT, New Zealand's hardest-working art reviewer John Hurrell's been writing up a storm lately. He's been calling it how he sees it; "The venue is not the sort of venue I take seriously. Too small, usually too much work closely hung, often part of a framing business and a lot of undersized and mediocre work. The type of gallery commonly found in Parnell." Take that! And elsewhere: "despite all that work... the results invariably look gross. Clunky, mixed with a dreary civic narrative." Ouch, etc. But as John says in his site introduction, eyeCONTACT is "about direct talk, perhaps two people speaking face to face, one of them asserting an unpopular position and staring down the opposition."

I would imagine he's going to need to do a fair bit of staring down after those recent reviews.

Something I've particularly enjoyed are John's musings on how an artist might have made his work more "intriguing". "If C---’s paintings were a lot bigger, maybe vertically bifurcated with conventional paint used in one of the halves ... Perhaps they need extension of surface and complexity of composition?" But then, perhaps wisely, John veers away from finishing the work for the artist: "I’m thinking out loud here (and starting to burble). He’d have to test the options."

I was reminded of this yesterday when filling out the Massey Arts Journalism survey at the behest of Bestof3. (Only a few little tweaks to the truth to make myself sound more impressive -- blogging does count as arts journalism, doesn't it?) One of the questions was whether you believed it was ever acceptable for a critic to advise an artist on how to make their work. Well, it depends on who the critic is -- and the artist -- but there wasn't a box to tick for that. Another one was whether you think it's acceptable for a critic to exhibit their own work. I ticked yes, thinking of Rita Angus's point of view (discussed recently by Artandmylife) that only practitioners are qualified to criticise another artist's work (no box for that, either). Actually I don't think it matters what a critic's day job is, as long as they can write well and have something to say. John Hurrell's eyeCONTACT scores on both counts.

I have been on the receiving end of some stiff reviews myself over the years (luckily none of them from Mr. Hurrell). Some of them would strip paint. Of course, at those moments I have done what everyone does when confronted by negative criticism: 1. Laughed and said it didn't worry me; 2. Made offensive and filthy remarks about the reviewer's intellect, personal appearance, and dress sense. And felt a bit better. I understand Colin McCahon had a list -- an actual, handwritten, itemised list of critics and other people who'd done him bad turns -- headed 'Hate List'. He kept it for decades.

At a book launch, I once met a critic who'd given me a shite review about 15 years previously. Pretending to be mature and nonchalant, and like it had just popped into my mind, I laughingly quoted the particularly choice line which was still burned into my memory like a plasma screen left on pause too long. He looked a bit shifty. "Did I really write that?" he said. Chuckled, and changed the subject, and disappeared off to the drinks table, and that was it. I felt vaguely disappointed, but I'm not entirely sure why. Well, clearly it was more important to me than to him: maybe that was the problem. Perhaps we want our critics to care...

Most artists I know pretend not to read their reviews. There's nothing worse than being asked by someone else what you think of a terrible review of your own work. Best to pretend that it didn't even enter your radar. (And then add the reviewer's name to your own handwritten list...)

Posted by Cheryl Bernstein at 8:27 AM

I had fun with that survey too. I don't think I quite qualify as an art writer though. Nice post