In the country recently for an exhibition, the presentation of a substantial gift of his work to the Auckland Art Gallery, and a visiting professorship at Elam Art School, NY-based expatriate artist Max Gimblett's been all over the New Zealand media recently. Foremost among the stories was his radio interview with Kim Hill (available here for a limited time), in which some of the truly great NZ art quotes of all time were uttered: "Yes, I take a photograph of [an object] with my third eye, and I hear it speak." "I get occupied by a whole series of commands, and I execute them." "Caffeine makes me cry."

Extraordinarily generous with his personal information, occasionally hilarious with his asides, disarmingly good-natured, full of Jungian rhubarb and self-deprecating anecdotes, this was the most compelling radio I've heard in ages, and has prompted me to look at Gimblett's work in a new light. Here's his A Love Like Fire, from 2005. 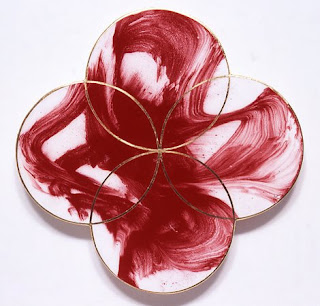 In her review of his show at the Page-Blackie Gallery (previously the Tinakori Gallery) in Wellington, Abby Cunnane repeats what's been a fairly constant refrain in the media around Gimblett's visit:

"Next year, he will be the first New Zealander to show at New York’s Guggenheim Museum, in a group exhibition, American Art and the East, alongside giants such as Jasper Johns and Robert Rauschenberg."

Kim Hill noted, however, that Gimblett wasn't actually prepared to commit himself on this one; and he was probably right not to do so. Great achievement though Gimblett's is to be the first New Zealand-born painter to be hung on Frank Lloyd Wright's ramps, I think the first New Zealander to show at the Guggenheim was in fact Christchurch designer John Britten, whose innovative carbon-fibre motorbike, the Britten V-1000, was one of the stars of Thomas Krens's much-vilified (and vastly popular) 'The Art of the Motorcycle' exhibition at the Guggenheim in 1998. The artworld hated the show: the punters flocked in droves. Here's a picture of Te Papa's Britten, which you might be familar with from a visit to their upstairs coffee-shop. 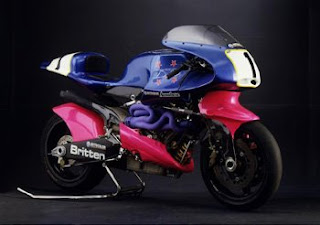 In all this thinking today about New Zealanders and the Guggenheim, apart from my own alarming pedantry what I'm most surprised about is that Gimblett's friend and mentor Len Lye, himself an expat-New Zealander resident for many years in New York, doesn't appear to have ever shown there.
Posted by Cheryl Bernstein at 1:39 PM

Indeed, Britten shared pole position at the top of the ramp in the Guggenheim show, which began its spiral through bike history with a steam-powered vehicle and received something like 300,000 visitors. It was then toured with the show to Chicago, Bilbao Guggenheim and Las Vegas Guggenheim.

But preceding Britten is Billy Apple, whose neon UFO Unidentified Fluorescent Object, and drawing for the work, was acquired by the Guggenheim from a 1967 exhibition at the Howard Wise Gallery. The work was exhibited at the NY Guggenheim in November 1977 as part of the exhibition "From the American collection: New Addition," which also featured the likes of Stella, Cornell, Rauschenberg, Naum Gabo, Calder and many more.

There is no sign of Len Lye or any other kiwi I can think of in the Guggenheim exhibition records.