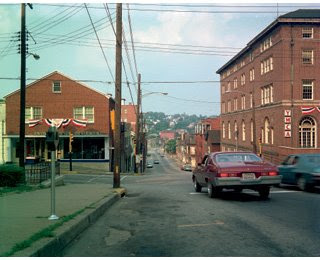 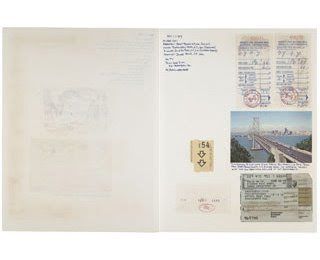 In my in-box this morning was a cheery (and rather optimistic) invitation from Phaidon Press to purchase an extremely expensive limited edition facsimile of the journal that photographer Stephen Shore kept of his road trip of the States in 1972-3. Shore meticulously -- some would say obsessively -- documented the trivia of the road, including "where he stayed, what he ate, what he watched on TV, alongside pasted-in ephemera such as receipts, postcards and parking tickets." As a teenager, Shore used to hang out at Andy Warhol's factory, and the work's got that same kind of cumulative banality that I always find so compelling.

Here's a statement Stephen Shore made in 1982 about his process of taking photographs:

The trout streams where I flyfish are cold and clear and rich in the minerals that promote the growth of stream life. As I wade a stream I think wordlessly of where to cast the fly. Sometimes a difference of inches is the difference between catching a fish and not. When the fly I've cast is on the water my attention is riveted to it. I've found through experience that whenever -- or so it seems -- my attention wanders or I look away then surely a fish will rise to the fly and I will be too late setting the hook. I watch the fly calmly and attentively so that when the fish strikes -- I strike. Then the line tightens, the playing of the fish begins, and time stands still. Fishing, like photography, is an art that calls forth intelligence, concentration, and delicacy.

That statement immediately made me think of this image, by Peter Peryer, a New Zealand photographer likewise of great intelligence and concentration (not sure if he is also a fly fisherman): 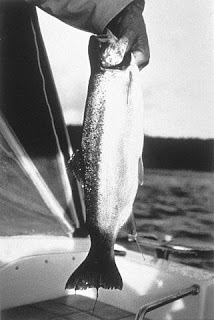 Shore's book has also prompted me to think about interesting on-the-road images in New Zealand photography. There's Laurence Aberhart's Seedless Heads Blow Me Away, from 1981, or -- possibly my favourite photograph ever -- Dimboola, Victoria, 13 August 1997 (in fact just about Aberhart's whole oeuvre involves a road trip); there's Peryer's wonderfully blank and blocky Barn from 2004, and much of Robin Morrison's work; there's Peter Black's Moving Pictures and Streetworks series. Black shot his Moving Pictures images through the car window, while passing through various nondescript locales. 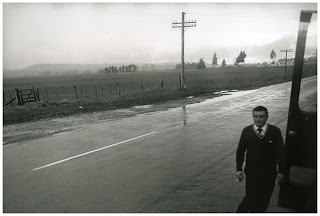 I presume Peter was driving at the time -- I haven't ever asked him -- but it was interesting to note that Stephen Shore couldn't drive, and experienced his on-the-road epiphanies through the passenger's window. I'm uncertain as to how that might change your perspective. Maybe it's why Shore concentrated on things he could photograph in his hotel room.

Travelling in the States and Europe in the early 90s, I had the idea of photographing the chairs in each of the low-budget hotel rooms I stayed in, and the carpet in each airport. (I took this trip before I learned to drive.) I thought the pictures might be interesting to look back on. But I think I only documented two or three examples before it all became too much of an effort. It takes a great degree of self-discipline to be obsessive, or indeed even to be meticulous. Let alone to be an artist.

Posted by Cheryl Bernstein at 9:02 AM