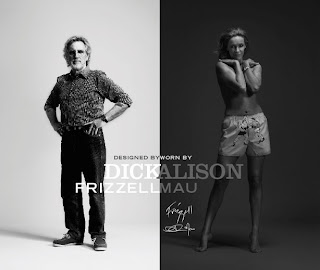 Sometimes I feel as though I've been down a well for the past couple of years. I'm astounded that I've missed this; artist Dick Frizzell's appearance in a Barker's advertising campaign last year. He designed some boxer shorts (sporting a nifty prizefighter design) for the clothing company's prostate cancer campaign, and newsreader/TV personality/and by the looks of it good sport Alison Mau got her kit off to model them. I realise that I may well be the last person in New Zealand to be aware of this shopportunity -- you probably already have a pair or two of Dick's undies duking it out in your drawer -- but what I find remarkable and worthy of note here is the inclusion of an artist with other New Zealand 'celebs', including current All Black prop Neemia Tialata, league star Reuben Wiki, New Zealand's favourite jackass Marc Ellis, etc.

Dick Frizzell, of course, who once remarked that when visiting a supermarket, he felt like Van Gogh walking through a wheatfield, is hardly the kind of artist to recoil in horror from the world of commerce. He was an ad-man himself for a decade, during which time he created the iconic Eta peanut butter man and the gum-booted, black singletted Ches 'n' Dale cheese characters. His paintings and prints have been concerned with popular culture and the commercialisation of the image for many years. So it's tempting to see his recent involvement with the Barkers boxer shorts ads as another aspect of his constantly evolving (Pop) art practice.

It's a bit of a mistake (although quite fun) to read too much sociology into advertising campaigns (or what would the ubiquitous and sadly award-winning Novus windscreens "show us your crack!" radio jingle say about our society?) Ads are the product of the imagination of industry creatives, rather than official cultural policy. (The truth about our society probably lies somewhere between the two.) But equally, there's something interesting going on when an ad agency working for a major retail chain feels that there's commercial legs in a 'proper' New Zealand artist fronting a campaign. I would hate to say that it represents some sort of cultural coming of age, but actually, it probably does.
Posted by Cheryl Bernstein at 9:06 AM