But is it better-looking than nothing at all?

(Via C-Monster) Andy Rooney shares his thoughts on art in public places.

"Is it really better-looking than nothing would be?"

Not a bad question to think about when planning public art, actually.

I was with Andy on the decorated cows and the dog in a gilded cage. He lost me, though, at the Tilted Arc business. There's a world of difference between enormous urban knick-knacks and difficult public art.

In New Zealand I think we tend to go for a mid-ground in our public art commissions: works by competent artists which aren't too intellectually or physically challenging. At the moment, we seem particularly keen on public works that evoke the history of place. Might be time for some tougher stuff. Some art which makes a public place its own.

We do do a nice line in urban knick-knacks, though. 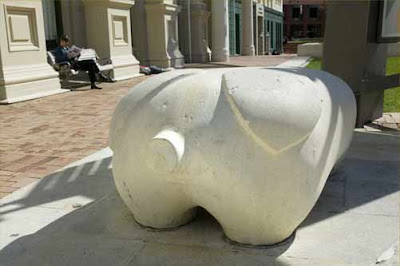 Photo of The Pig in Wellington's Civic Square. The smoking cigarette someone had tastefully added in magic marker seems to have been removed since I last saw it. 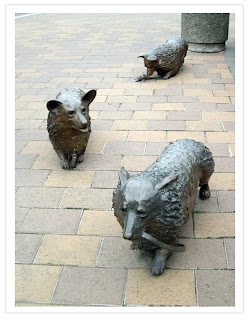 Photo of the appalling Christchurch Corgis by Michelle from christchurchdailyphoto.com . The rear dog is sniffing a half-melted bronze ice-cream cone. Ankle-tapping death-traps at night-time... 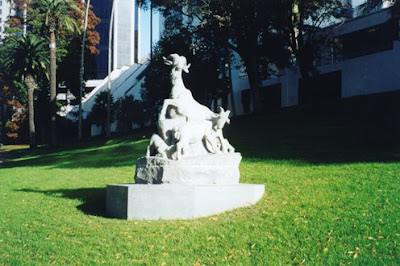 A theme is developing ...

Posted by Cheryl Bernstein at 8:58 AM

The Corgis are atrocious in so many ways!