There's a stream at the end of our garden. The city is scored with them, built over water like an Antipodean New Orleans. Water rises from the underground aquifers, drips from the copper downpipes of the wealthy nor-west suburbs, leaks from the dusty goodsyards of the industrial south-east, picking up rubbish and effluent and diesel slicks on its way to the sea. After the big rains a few weeks ago, signs appeared in the park, nailed to the ancient oak trees: "Danger! Polluted water. Do not fish." Two days ago a man out for an early morning run discovered a body floating in the river in the heart of the tourist area of the central city, where the old willows the settlers planted are slowly being replaced with native trees.

The raupo swamps were drained generations ago, while the last surviving area has recently been made into a museum of itself. When I was growing up, the bus to New Brighton took you through a scrubby waterlogged wasteland known as the Travis swamp. Now it's an eco-system called the Travis Wetlands: prisoners on day release have built boardwalks and bird hides for families pushing baby strollers on a Sunday outing. Across the road is a massive wall which encloses a new cookie-cutter subdivision.

When it rains, our stream rises quickly. It is a tributary of the Wairarapa Stream, which in turn feeds the Avon: the stormwater drains of our neighbourhood empty into it. You can go out for half an hour in heavy rain and when you come home, the water might be several feet up the lawn. When it recedes, it leaves behind a wild tangle of sticks and leaves and plastic rubbish which collects in great drifts around tree trunks. The sticks are left all pointing in the same direction, marooned by the current. I read recently that if the Waimakariri River were to breach its banks in a catastrophic storm, the resulting flood would reach the Cathedral.

I've been most struck this week not by art images, but by reportage of the aftermath of Hurricane Ike in the US. This image of a house in Texas's Crystal Beach reminds me of the kind of uneasy scale that often exists in Peter Peryer's photographs, where you're not sure whether you're looking at a full-scale object or a miniature version. The photograph shows debris from storm surges, which look like a giant version of what collects on our lawn. If you look closely, you can see kitchen cupboards and entire decks among the debris. 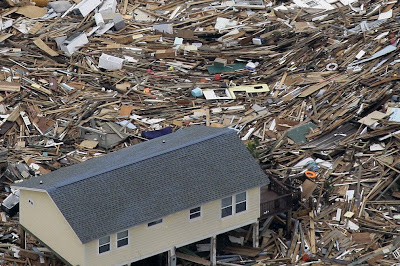 This is a photo of the foreshore in Gilchrist, Texas, where only one house was left standing after three-metre-high floodwaters receded. (More images of the aftermath of Hurricane Ike are at thebigpicture) 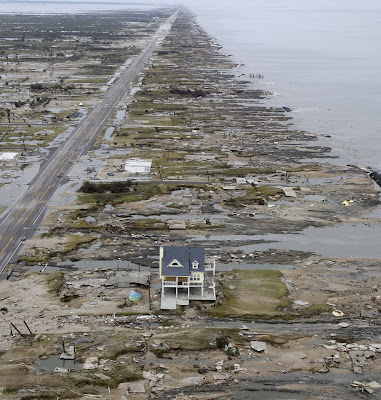 There were many casualties of the storm. Among them was Mies van der Rohe's famous glass Farnsworth House on the Fox River in Illinois, which, though standing 14 feet above the river on 5 foot poles, was flooded to the depth of more than a foot. 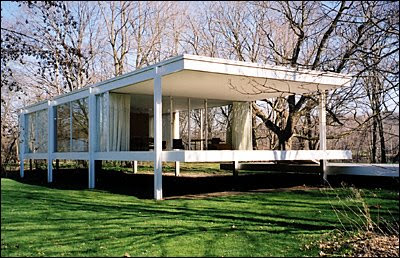 When it was built, the architect researched the Fox's history of flooding, and raised the house to a height sufficient to withstand a one-in-one-hundred year flood: subsequent development, though, has decreased the stormwater capacity of the surrounding area and made it increasngly vulnerable to rising waters. Its original owner, neurologist Edith Farnsworth, with whom Mies van der Rohe was romantically linked, sued him after it was built, claiming that the house was completely "unliveable". 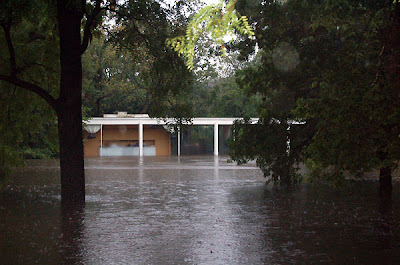 Posted by Cheryl Bernstein at 9:06 AM

Email ThisBlogThis!Share to TwitterShare to FacebookShare to Pinterest
Labels: architecture, art and the media, Peter Peryer